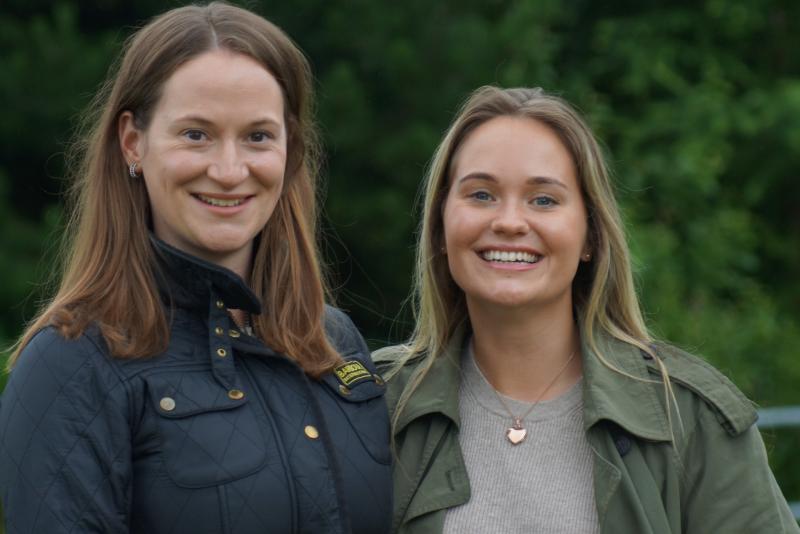 Katie Keys (right) pictured with her sister Lizzie who raised more than £3,000 to support the unit which helped Katie after the crash last year.

Medics have described a young Derry woman who survived an horrific motorbike crash as a 'walking miracle'.

Katie Keys was seriously injured in the crash at Burt in County Donegal on July 13 last year.

The 28-year-old Waterside woman, who was a passenger on the motorbike, spent two weeks in a coma in a hospital in Dublin.

She was later transferred to Altnagelvin Hospital in Derry where she received further treatment, before spending months recovering at Spruce House rehabilitation unit at the hospital.

Katie was only allowed to go home in October last year.

However, she still receives the care and support of the Community Brain Injury Team which is based at the Foyle Disability Centre at Glen Road.

In thanks for the care that Katie has received, her sister, Lizzie, organised a fundraising initiative.

Since January 1 this year, Lizzie has run one mile every day.

In total, Lizzie's efforts raised £3,465 which she yesterday handed over to representatives of the Community Brain Injury Team. Lizzie said it was her way of saying thank you to 'amazing' care that the team and others had shown towards Katie.

“On October 11, after a meeting with the consultant, who said that Katie is a 'walking miracle', she was discharged from Spruce House Rehabilitation Centre,” she said.

“Following Katie's discharge from the rehabilitation centre, the Community Brain Injury Team in Derry has been working with Katie and they will continue to do so for as long as necessary.

“Through the help of the team's occupational therapists, ophthalmologists, physiotherapists, speech therapists, as well as social workers and a clinical psychologist, Katie is getting used to normal life again.

“The clinical psychologist has also been crucial in providing support for Katie's boyfriend, our parents and myself.”

Katie returned to work as office manager at Drumahoe Vets shortly before the lockdown as part of her ongoing rehabilitation.

Lizzie said she wanted to give something back to the caring team.

“I set myself a challenge of running one mile per day from January 1 until July 13 as that marked one year since the accident.

“The money I raised is in aid of the Community Brain Injury Team in Derry which has been vital in Katie's return to normal life.

“They also helped her get back to work and adapted her workplace so that it suits her current needs.

“They also helped her get back driving and return to independent living.

“I am hoping the money raised can provide resources and equipment for the Community Brain Injury Team so that other families can also benefit for their fantastic provision, in the same way as we are still benefiting from their incredible support,” she added.