The spectacular secret waterfall is a secret no more 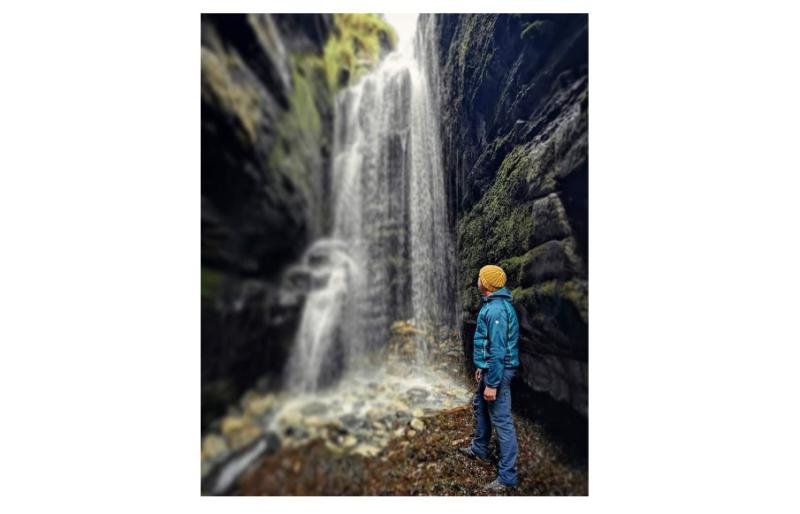 Donegal’s best-kept secret is out, and it is leading to serious safety concerns.

The stunning ‘secret’ waterfall at Largy between Killybegs and Sliabh Liag has been making more and more appearances on social media.

This in turn is leading to an ever-increasing number of people seeking it out to photograph the beautiful waterfall or simply to enjoy the sanctuary of a unique waterfall cave below the cliffs.

Indeed, visitors are arriving not only from around Donegal but from all over the country to see the spectacular sight for themselves.

But those visiting the area need to be extremely careful not to be caught by the rising tide.

And Cllr Niamh Kennedy (Ind) raised concerns about another safety aspect for visitors.

Addressing a meeting of the Municipal District (MD) of Donegal on Tuesday, she said: “People are trying to access the so-called secret waterfall on a daily basis. They are parking at Largy and walking on the narrow roadside.”

She told how the previous evening there were small children walking down on a narrow wall with parents holding on to them. Other concerns are cars reversing out onto the main road.

“There are quite a number of comments on social media about it,” said Cllr Kennedy.

Area Roads Officer, Mark Sweeney, agreed that a growing number of people accessing the secret waterfall was a cause for concern.

“Since it hit social media, everybody knows about it,” he said.

“If it is going to be that popular we will need a car park."

Mr Sweeney explained that cars pull into a picnic area and then walk 250 metres down a narrow road.

The land falls off below the road, making it even more dangerous and limiting the options for improving safety.

“There is a pinch point along the shore where people could get caught,” he said.

“We need a solution and we need funding. We also need the support of landowners.

“In the meantime we still have people walking down along a road so narrow that it is really dangerous.

“We will have to see what we can do.”