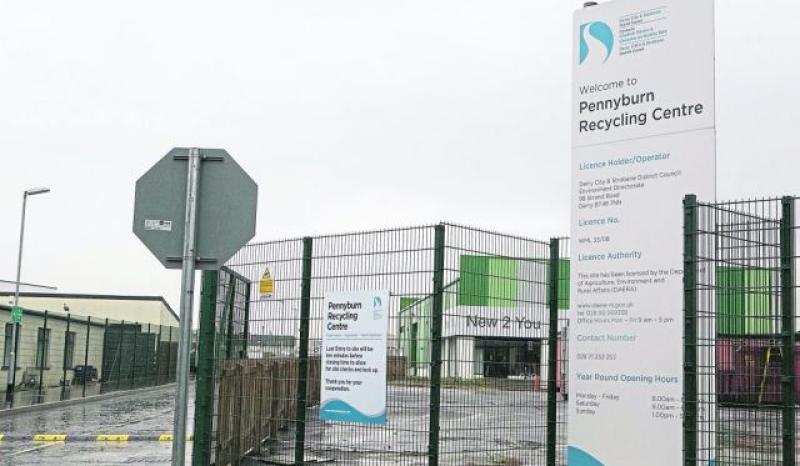 Just over 10% of all vehicles using the Pennyburn 'dump' in Derry are from the Republic, new figures have revealed.

Concern was recently raised that Derry City and Strabane District Council ratepayers were footing the bill for people from a different jurisdiction to get rid of their rubbish.

DUP Alderman Maurice Devenney said the use of the local dumps by people from Donegal was a 'quite serious' problem which needed to be examined.

He asked for vehicles using the council-owned recycling centres to be monitored to assess how big an issue it was.

Five of the council's 11 recycling centres reopened on May 18 last after being closed from March because of the coronavirus pandemic restrictions.

After the recycling centres reopened, council officers noted the registration of all vehicles using them.

The information was collated from Monday, May 18, to Friday, May 29.

The figures, which have been seen by the Derry News, revealed that during that 11-day period, a total of 1,067 cars with Republic of Ireland number plates used the local dumps.

The vast majority of Republic-registered vehicles used the Pennyburn recycling centre - a total of 936.

This was just over 10% of the overall 9,099 vehicles which used the Pennyburn dump during this time.

Eighty three vehicles with southern number plates used the Glendermott recycling centre during this period, out of a total of 9,605 visitors.

There were 48 southern-registered cars which used the Strahan's Road dump in Strabane, out of a total of 2,882 visitors.

The two other councils dumps that reopened on May 18 - Strathfoyle and Claudy - had no vehicles from the Republic visit them during the period from May 18 to May 29.

Derry’s recycling centres do not charge people to get rid of their waste.

The issue of usage of the local recycling centres was discussed last week at a meeting of the council's Environment and Regeneration committee.

At the meeting, DUP Alderman Ryan McCready proposed that a special meeting of the committee be organised to discuss a number of issues around the recycling centres

This included, he said, the dumping of commercial waste at the centres and the number of people from outside the council jurisdiction using the centres.

Alderman McCready stressed that he was speaking about anyone from outside the council area, and not just people from Donegal.

His proposal was supported by other councillors on the committee.

Meanwhile, van drivers who use the local recycling centres are being advised of new arrangements that will come into place from this week.

No large vans with trailers will be accepted at Pennyburn dump.

However, large vans will only be permitted access between 8am and 9am, Monday to Saturday.

A spokesperson for the council said the new arrangements are in place to assist with traffic management arrangements and for safety reasons.