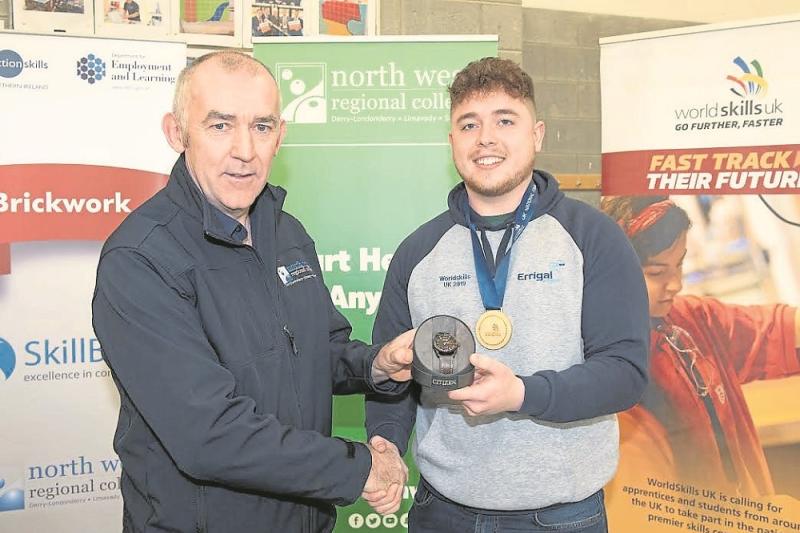 Brendan Duddy is presented with a watch by John Cartin, deputy head of training and skills at NWRC.

A Derry apprentice who has been officially named as the best dry-lining student in the UK, is encouraging local young people to consider the apprenticeship route when making the next step in their education or career path.
Speaking ahead of next week’s Apprenticeship Week at the North West Regional College (NWRC), Brendan Duddy said he chose an apprenticeship, knowing he would be guaranteed employment, during, and at the end of course.
Brendan, 20, from Bishop Street, enrolled for an apprenticeship at NWRC after he completed his A-Levels at St Joseph’s Boys School.
He explained: “I knew 100% that I wanted to get a trade. At University I could spend years of my life studying to work in an oversubscribed area, so when I saw the apprenticeship opportunity with NWRC and Errigal Contracts, I knew it was for me.”
The joint enterprise between NWRC and Errigal was launched in 2017, offering two-year apprenticeship opportunities in a number of skills areas.
During the two-year programme, students are given the skills in college to achieve a City and Guilds Award; work with top professionals on jobs across the UK and Ireland, all while earning top apprenticeships wages.
Brendan, who won the gold medal in dry-lining at the Live UK Worlds Skills Finals in Birmingham and will now go on to represent the UK at the 2021 world finals in Shanghai, said his apprenticeship had given him the opportunity to work all around the UK, in Manchester, Liverpool, and Belfast, learning his trade.
He’s now looking forward to the Skills Olympics next year when he’ll go head-to-head with the world’s best. The competition in Birmingham was tough,” he said. “As you work you are aware of the thousands of people who are looking at you.
“When I won gold I was shocked and I’m delighted to now be going on to compete in Shanghai.
“I’ve really enjoyed the opportunities that studying with NWRC and working with Errigal has given me and I’d encourage more young people my age to give it a go. I’m now working full time with Errigal and it’s been great.”
From, 3-7 February, a series of events are being held across the Derry City and Strabane District Council area promoting the opportunities available for apprentices locally.
North West Regional College will host two events to celebrate Apprenticeship Week.
The Construction Futures event will be held at the Student Zone at Strand Road campus on Tuesday, February 4 from 10-1 p.m.
An information evening on Higher Level Apprenticeships (HLA), will be held at the Strand Road campus the following night (Wednesday, 5 February) at 6.00pm. This event is open to everyone.