United Dioceses of Derry and Raphoe hold Synod in Burt

The Church of Ireland recently held its Synod of the united Dioceses of Derry and Raphoe in Inishowen. 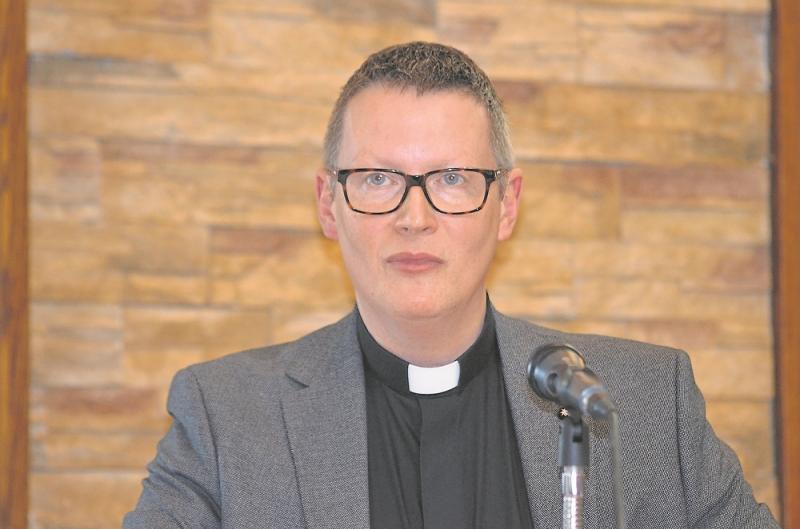 The Venerable Robert Miller, Archdeacon of Derry addressing the United Dioceses of Derry and Raphoe Synod.

The Church of Ireland recently held its Synod of the united Dioceses of Derry and Raphoe in Inishowen.
Addressing the packed room in Burt's An Grianan Hotel, the Venerable Robert S Miller, Archdeacon of Derry, said there were many challenges within the Church and many challenges to the Church’s role within society.
He said: “The Church of Ireland has lived out her faith on one island with two distinct political ideologies and jurisdictions.
“The nations on this island were born from different national identities, and we remember only too clearly the conflict that consumed our island home for far too long and which – if we aren’t careful – threatens to embroil a new generation.
“As the Church of Ireland, we were challenged to embrace one another in the Church as sister and brother while holding different national identities. We see this writ large here in this room.
“The nature of our own United Dioceses as we go to-and-fro across the border is that we share a common identity as members of the Church of Ireland.
“Our Christian identity helps shape our national identity.
“And I can’t help feeling that there is something reve- latory, something illumin- ating, something almost prophetic in this – a lesson that contains an important message for us, in this place and at this time.”
He said the Church's role in the Brexit saga should not take sides but to facilitate debate between Brexiteers and Remainers.
“For the last three years there has been tremendous uncertainty about our future. Brexit seems, at the moment, to offer more questions than answers.
“As a Church we must be political with a small ‘p’; that doesn’t mean we should be arguing on any particular side of the BREXIT debate, but we certainly should be arguing for one another’s needs to be acknowledged and addressed,” Rev Miller said.
He added: “Like Northern Ireland, the Republic has been consumed by the Brexit debate.
“Both parts of the island will be profoundly affected, whatever transpires.
“Indeed, in the run-up to the recent budget in the Republic, concern over the financial impact of Brexit forced the government to lower economic growth projections from this year’s 5% to half of one percent.
“The subsequent budget was suitably cautious.
“There is no denying that the Republic’s economy had been performing incredibly strongly and that some in Irish society are doing very well nowadays.
“It’s estimated there are around eighty thousand millionaires in Ireland, and the government says there are more people in work than ever before.
“But homelessness is also at an unprecedented high, with more than 10,000 people – forty per cent of them children – having nowhere to live. And no civilised society, certainly not a modern Irish one, can be comfortable at the sight earlier this month of a 5-year-old boy, identified only as Sam, sitting on a pavement eating his dinner off a piece of cardboard.”
Rev Miller paid tribute to the former Bishop of derry and Raphoe Ken Good.
“I would especially want to send Diocesan Synod’s prayerful good wishes to Lord and Lady Eames, Bishop Jim and Thelma Mehaffey, and Bishop Ken and Mary Good.”