History made at St Brigid’s College

Cáit follows in her father's footsteps 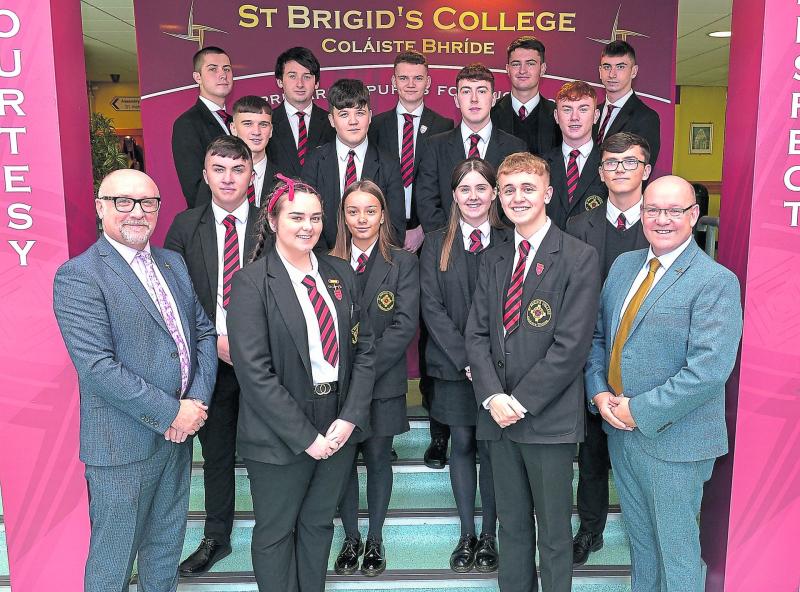 A little bit of history has been made at St Brigid's College in Derry.
When Year 14 student, Cáit Ni Cheallaigh, became the school's Head Girl earlier, she was following in the footsteps of her past pupil father, Gerald Kelly.
Thirty-so years ago, in the days when its students sported brown jerseys and blue shirts, Gerry became the first ever Head Boy of what was then known as Carnhill High School.
Speaking to Derry News, a clearly delighted Cáit said she was “absolutely buzzing” to have been made St Brigid’s Head Girl.
The Coláiste Bhríde student said: “I am looking forward to being an ambassador for the school, along with Emmett Donnelly (Head Boy), Cian Doherty (Deputy Head Boy) and the whole Senior Prefect Team.
“Becoming Head Girl was a great honour and I hope I will make everyone at the school proud this year.
“St Brigid’s is like my second family, thanks to its brilliant pastoral care and the amazing friends I have made here.
“The teachers really go the extra mile for us. When I was doing my GCSE’s and AS’s, nothing was too much bother for them.
“The whole school community in St Brigid’s is very friendly and welcoming,” said Cáit with a smile.
According to Gerry the whole family was “really proud” of Cáit’s achievement.
He said: “Cáit’s mammy and I and her brothers, Míċeál Piaras and Ultán Rua, were really proud when we heard Cáit had been made Head Girl of St Brigid’s.

“It is a fantastic school, with brilliant staff and pupils, where she is thriving. Also, because St Brigid’s offers Irish medium education and has promoted Gaeilge under the current principal, Mr Ó Mianáin, and his predecessor, Dr Ó Cuinneagáin, Cáit, who is bilingual, was encouraged to use her Irish from day one.
“The whole family was pleased. We had a long association with the school, so it meant a lot. Cáit's uncles, Míċeál, John and Michael and her aunt, Clare, are all St Brigid’s past pupils.”
Reflecting on his time at St Brigid's College, Gerry said: “The recent sad passing of Mr Brian Rainey, who was vice-principal throughout my seven years at the school, gave me great pause for thought.
“In September 1984, I left St Brigid's for Queen's University, Belfast, thanks to many fine people in that school community and their incredible teaching, encouragement and belief in me. I was not alone, however, further and higher education was a path lots more St Brigid’s students were to take in the years that followed and continue to do so to this day, which is good to see.
“I will always be thankful to the wonderful people in St Brigid’s who enabled me to get to where I am today, especially Marianna Doherty, George Chambers and Charlie Doherty, who taught me A’ Level Physics and Maths. Not forgetting the famous ‘Bun Brigade’, Jim Zammit and John Christie.
“That is not to mention, Catherine Boyle, Mairead McShane, Ms Coyle and Ms Bradley (English); Owen McColgan (history and form teacher); Dan O’Reilly, Liam Gallagher and Tony Carlin, for the shows, especially ‘Dracula Spectacular’; Adrian Brothers and Kevin Rafferty (art); Brendan Burns, Mr McNally, Dave Simpson and Ms Haye (PE); Willie Bradley (French); Deirdre Doherty (geography); Ms Fry (RE); Ed Henry (computing); and Piaras Mellon (Irish). Last but not least, Harry Sharkey and Mickey McGrath,” said Gerry.
“Apologies to anyone I might not have remembered, you were all a great bunch, whose invaluable encouragement and advice, given to me from my first year to my last, allowed me the space to develop into the person I am today,” said a thoughtful Gerry.