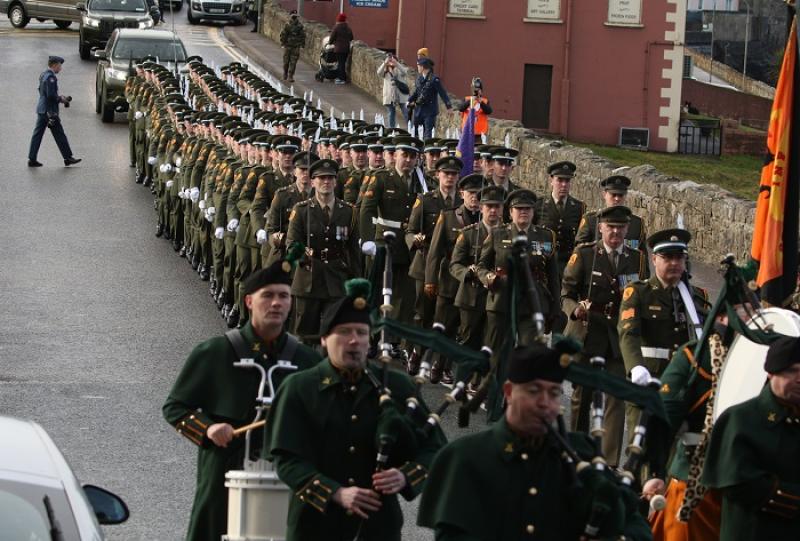 Children from the local national school, St Macartan's waited patiently on the Main Street as they witnessed an historical event today as members of the 28 Inf Battalion marched through Bundoran on their way to Finner Camp.

The event commemorated a similar march 100 years ago, to the day, when nearby Finner Camp was handed over by British Forces to the Irish Military Forces after the War of Independence and the signing of the Anglo Irish Treaty.

Every day since then, over those 100 years, the Irish tricolour has been raised each day at first light and taken down at dusk.

At the earlier special Mass in Our Lady Star of the Sea, concelebrated by parish priest Canon Ramon Munster and Finner Camp Army chaplain, Fr Gerry Carroll spoke of the unique connection of Finner with the Irish Defence Forces, which had spanned the last century. That had included members of the Air Corps Search and Rescue service and the local community throughout the north west. An Air Corps fly over by two military helicopters also formed part of the day's proceedings.

Later members of the battalion marched in formation through the town and then moved onto Finner where they entered the front gates under the command of Commanding Officer Lt Col Stephen Morgan.

OC Lt Col Morgan also addressed an invited audience of past and serving soldiers and distinguished guests who had links with  Finner since that first day in February of 1922.

He later laid a wreath in honour of all those who had either served or had been linked with Finner Camp.

It was a deeply moving ceremony for many of those present, as they reflected on those 100 years, that has seen both joy and deep sadness since the foundation of the State.

from British Forces after the end of the War of Independence. Pic: Michael McHugh

He said: "As we commemorate this special date in our history, I am very conscious of the significance of Finner Camp and its link with the people of the North West Region. It would be remiss of me not to acknowledge the special link some of our guests have to those involved in the takeover and subsequent garrison of this Camp by Irish Forces 100 years ago.

"In particular, I think I would be forgiven for highlighting the Units own link with the events of 1922 in the personage of Col Declan O Carroll a former OC of the 28 Inf Bn, whose father Jack O’ Carroll from Bundoran was the officer in charge of the Guard of Honour for the raising of the Irish tricolour in this Camp for the first time on this historic day 100 years ago. In upholding our military tradition the national flag is raised at first light and lowered at last light with honours as it has been every day since the 17th of February 1922.

"Since 1922 there has been an unbroken military presence in Finner Camp by various units of Óglaigh na hÉireann. The men and women who have served here have steadfastly stood ready to fulfil all assigned tasks given by the Governments of the day. From ensuring that the roots of a fledgling state took hold, to preparing to defend the state against the greatest tyranny the world has ever seen during the Emergency, Finner Camp was to the fore in all planning aspects.

From a modern perspective, the 28 Inf Bn was formed on 01 September 1973 in response to the troubles in Northern Ireland. The Unit motto “An Bearna Bhaoil a Chosaint” defending the gap in danger, has always been our ethos. In the nearly fifty years since its formation, the Unit has provided support to our colleagues in An Garda Síochána along the border and in various other aid to the civil power roles which thankfully have reduced in more recent times.

Some of the guests at today's events in Finner. Pic: Michael McHugh

We have supported the people of the northwest through our cooperation with the county councils of Leitrim Sligo and Donegal during various extreme weather events. Most recently the personnel of Finner camp stood shoulder to shoulder with frontline staff of the HSE and other state agencies in the States fight against Covid 19.

"The challenges faced by the soldiers who serve in Finner camp in 2022 could probably not have been imagined by our predecessors of 1922 but they are connected by one overarching dictum, Loyal service to the State. Whenever Ireland calls upon the soldiers of Finner Camp, we will be there.

"Whilst the 28 Inf Bn is the major Unit in Finner Camp I would like to take this opportunity to acknowledge the support we receive other units stationed here from the Corps of the Military Police, Communication and Information Service Ordnance, Transport, Medical and Engineers.

The Guard of honour which formed an integral part of today's ceremony. Pic: Michael McHugh

As you peruse the displays in the gym after the conclusion of today’s ceremony will you will see how the Irish Army has developed, from patriots in trench coats to the well-armed and trained professional national army it is today. The soldiers of Finner Camp drawn as they are predominantly from all counties of the northwest represent you the people with honour both at home and overseas.

"But our efforts are never restricted to inside the Camp. We are of the communities we serve and we are proud of the relationships we have developed, here in the Donegal, and all over our area of operations. This includes the contribution that personnel from this Camp have made to civil society, as community leaders, as sportspeople, as charity workers and as parents and siblings.

In preparation of the arrival of the 28 Inf Batt. Pic Michael McHugh

“The major forum for your nation’s greater role in world affairs is that of protector of the weak and voice of the small, the United Nations. From Cork to the Congo, from Galway to the Gaza Strip, from this legislative assembly to the United Nations, Ireland is sending its most talented men (and women) to do the world’s most important work, the work of peace”

"The men and women of Óglaigh na hÉireaan who have served in Finner Camp and more particularly since the formation of the 28 Inf Bn in 1973, have a tradition of unbroken service in the cause of peace throughout the world from East Timor and the Middle East to Africa and Central Europe.

"On this day of celebration, we send our thanks to the personnel of the Unit who continue that tradition in Lebanon and Syria, and equally if not more importantly to their families who make the unseen daily sacrifice of time away from their loved ones whilst dealing with the day to day challenges at home. We remember those of our Unit and the wider Defence Forces who have paid the ultimate sacrifice in the service of the State.

"We also pay tribute to our Aer Corps colleagues who served in Finner in their Search and Rescue role and who on a daily basis risked and some of whom who have tragically sacrificed their lives so that others may live. I would like to thank GOC Aer Corps for their contribution in making our commemoration such a special occasion.

For those not on parade, it was a few minutes of respite to enjoy the day's proceedings. Pic: Michael McHugh

"You see Finner Camp looking resplendent despite the weather this is in no small measure down to the hard work of our environmental team led by Pte Barry Foley and the Barrack Foreman Davy Slevin.

"Finally, I would like to acknowledge and thank you, our families. Life in uniform can be challenging and no one knows that more our husbands, wives, partners, daughters and sons. The requirements of Overseas and on-island duty, the call to service at short notice, and at times of the year and in conditions that most others do not work is a constant reality that you are very familiar with. And it would simply NOT be possible for us to follow this path, to serve the State in this uniform without your constant and unwavering support. It is important that we always acknowledge this.

Afterwards guests enjoyed some famous Finner culinary hospitality, before heading up to the Gym, where an impressive array of militaria, both past and present were on display.

It was a memorable day, for all present, one which will not be repeated for another century.