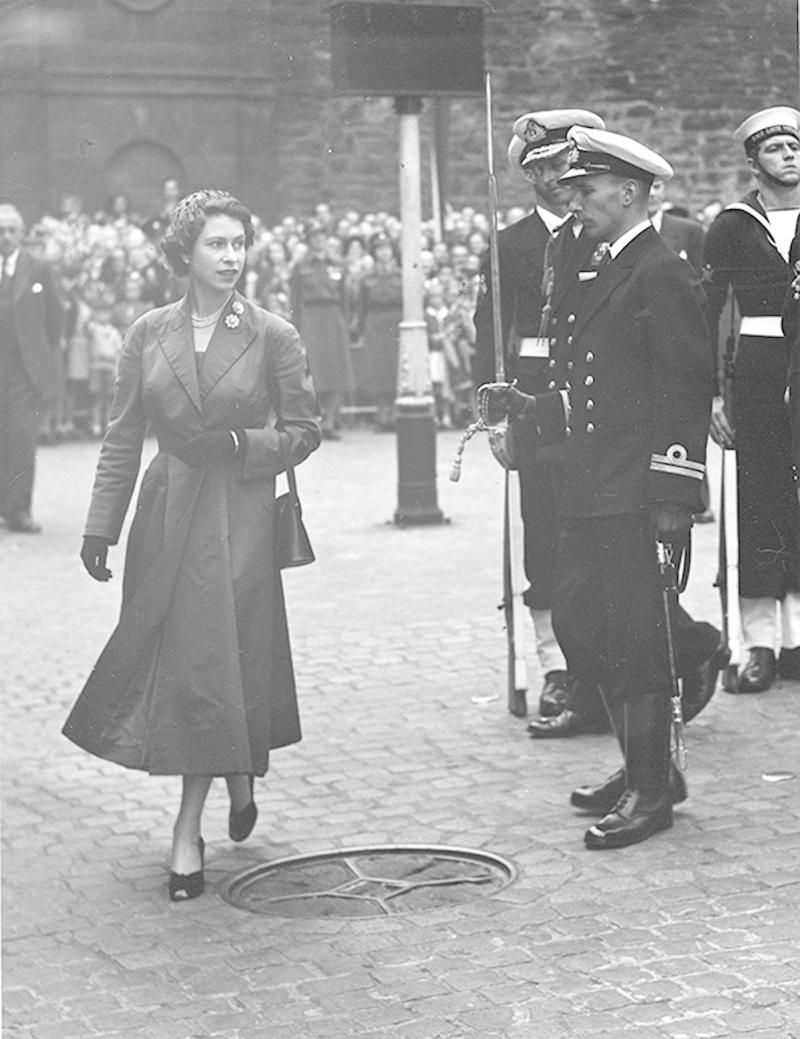 A series of never before published pictures of Queen Elizabeth II on her first state visit to Northern Ireland just after the Coronation in 1953 were unearthed by the UK City of Culture’s BT Portrait of a City project in 2013.

The images were taken by Royal Naval photographer Raymond White on the Queen’s arrival at Lisahally Docks in July 1953 as part of her Coronation visit to Derry. He was the only photographer present and the photographs have never been seen by the public.

The images were digitised and formed part of the BT Portrait of a City project to create the largest digital community archive ever assembled from one city.

In this article, taken from the Derry News of Thursday, 25th July, 2013, Derry man Raymond White recalls the excitement of the day.

“I was Leading Photographer before I left the Navy. I served in the Navy for eight years. I was demobbed in 1954. I left Ireland in December and was on a month’s leave into January.

“I am surrounded by cameras at the moment. I ran a photographic retail business for 50-odd years after I left the Navy. I began taking photographs when I joined the Navy in 1946. I have certificates on the wall here from Germany.

“I still remember that day at Lisahally really clearly; it was frightening, let’s put it that way.

"In Lisahally we have the photographs where she gets on the specially made platform where she got off the train. She walked towards HMS Rocket and boarded it. Then the last one she was looking down from the Rocket and it’s me and I am the only one in front of her. 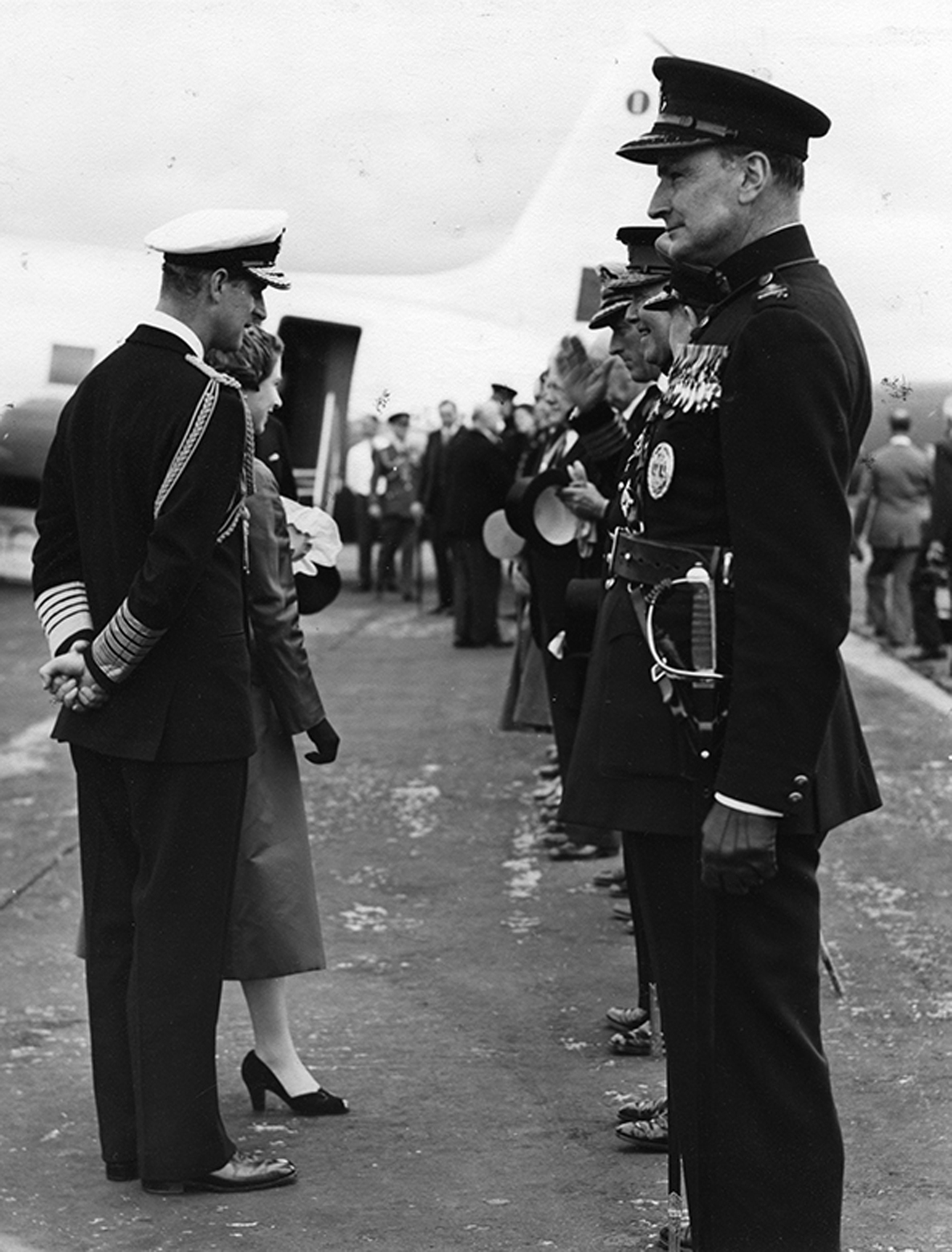 “The press, when I was stood there, there was every newspaper you could think of who wanted to be there. They followed the Queen everywhere they went But the Naval police, who all carried Smith and Wessons, told them ‘You can’t, not in this dockyard’, and escorted them all out.

"They looked at me as well and said: ‘What the hell are you?’ But I was the official photographer so they told me to carry on. No civilians were allowed cameras at all, it wasn’t like today with these phone-camera things, otherwise they would have been sneaking pictures everywhere.

“The reason they weren’t allowed in is that the Rocket had been altered for atomic warfare. What it was that hosepipes had been specially adapted so that if they were in an atomic explosion then they would spray the ship with saltwater and that would wash away the radioactivity, or so they thought. Having left the Navy and worked in atomic energy research I found out pretty quickly that it wouldn’t. 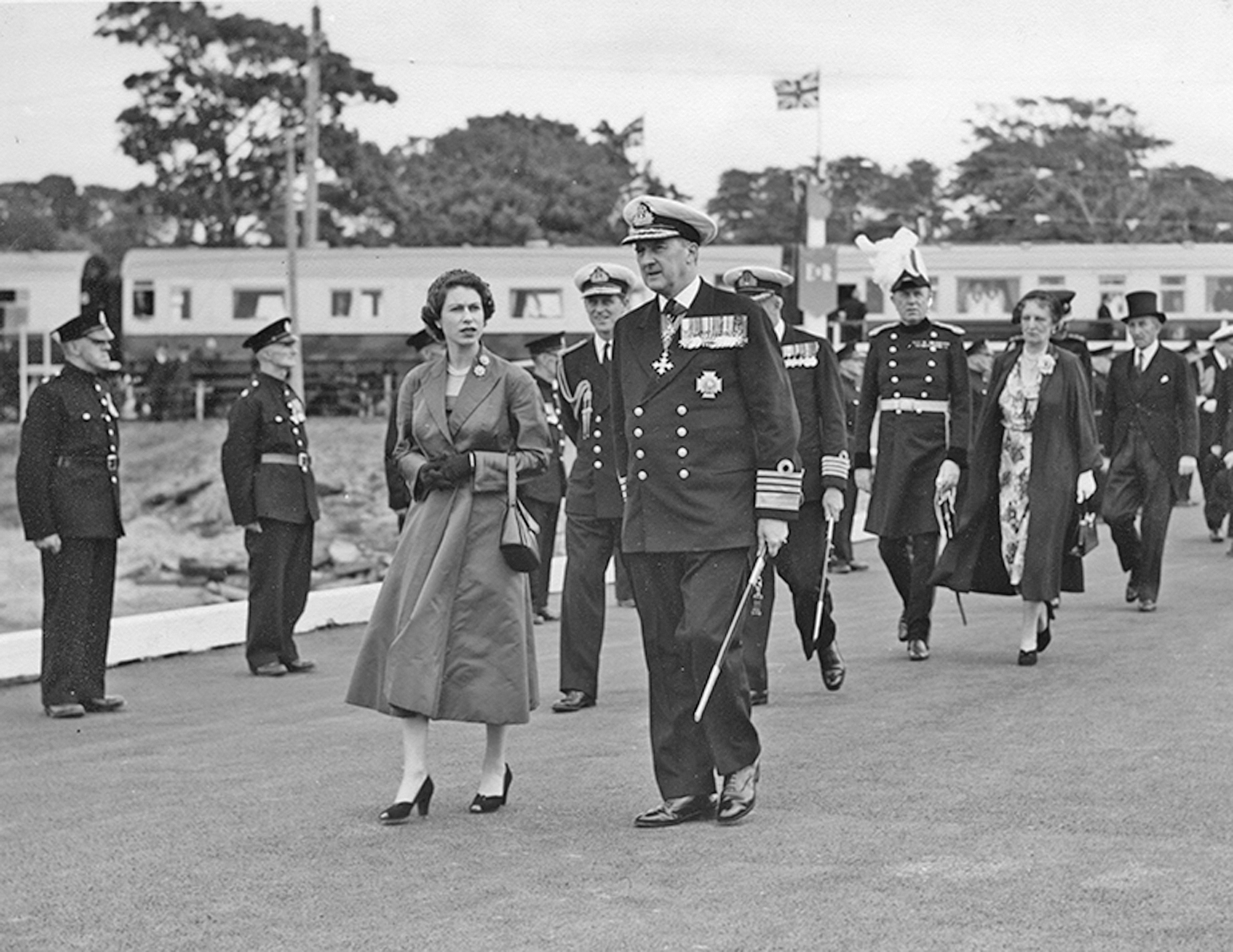 Queen Elizabeth II disembarking from the train at Lisahally docks on her first state visit to Northern Ireland following her Coronation a month earlier.

“The Mirror offered me £400 for the pictures I got that day for one picture. But it was Crown copyright reserved and I couldn’t have given them the pictures, even if I had wanted to. Now sixty years later, we don’t have to worry about that.

“So the pictures were never seen by the public, never published. I kept them all in an album at home. The pictures in Derry were Yorky Goodwin’s, another Naval photographer, from when she left the Rocket and was with Sir Samuel Orr, the Mayor of Derry.

“The latter ones when she’s leaving Eglinton which is now Derry Airport, were taken by another Naval photographer.

“There were people everywhere that day. Shipquay Street was blocked solid with people trying to catch a glimpse of her.

“When I took the photo of the Queen standing right in front of me I remember thinking, ‘I wonder what I’ve got’. You don’t know. You take the picture and until it is developed you can’t say. 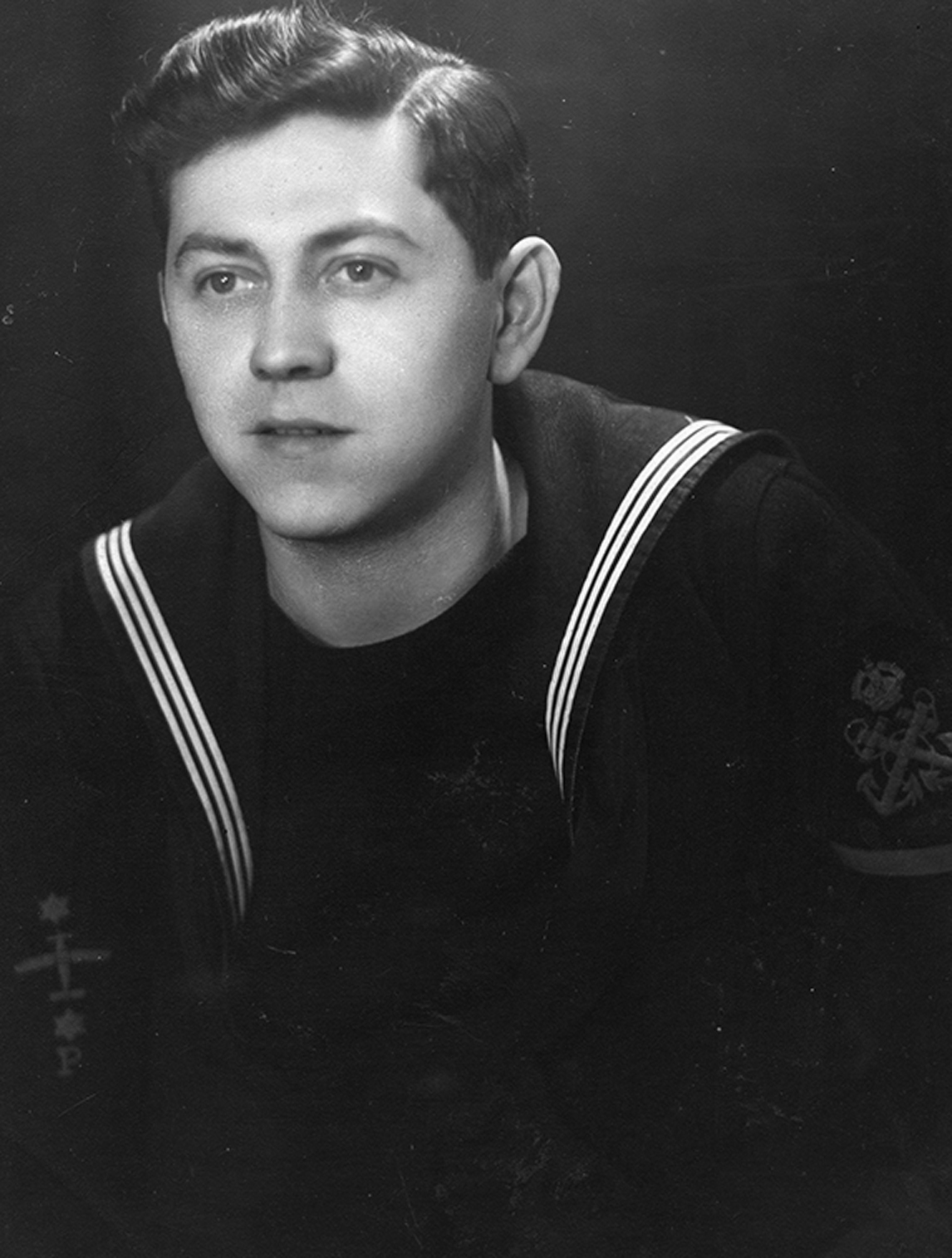 “On the negative she was about one centimetre high. It was a Kodak P1500 cut film and I developed it in a sulphide developer which was to say I had to spend 17 and a half minutes developing it so it wouldn’t increase the grain size on the negative.

“It had been through an ordinary developer it would have been like the old newspaper photographs all made up of dots. By doing it the way I did, that didn’t happen, but that 17 and a half minute wait until I could look at the negative I went through hell. You just never know and when I saw it I thought thank God.

“I actually had one which I blew right up to just her head and shoulders and there was still no grain on it.

“I still use film now and I take film cameras with me today, not digital. Digital is good but it’s just not the same as film.

“Naturally over the years family and friends have all seen the pictures. The one of the Queen looking into the camera I gave to my mother-in-law and she this was brilliant. When she died I retrieved it. 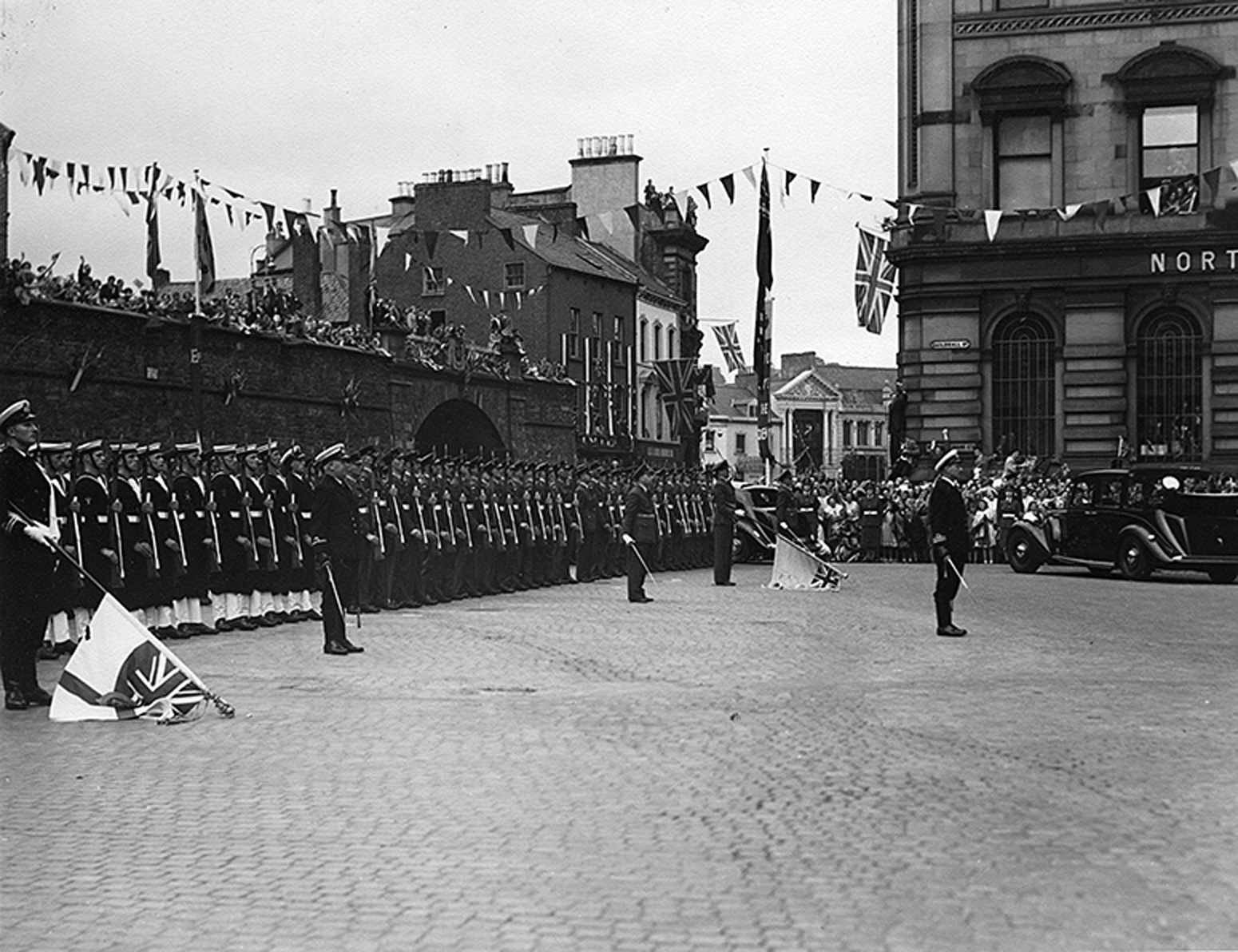 A huge crowd gathered in the city centre for the visit.

“What Derry has with these pictures is something that will remain in history.”