"He ate, slept, and drank football, keeping Deele Harps on the field, keeping soccer alive not only in the Deele Valley but in the valleys that are around it." 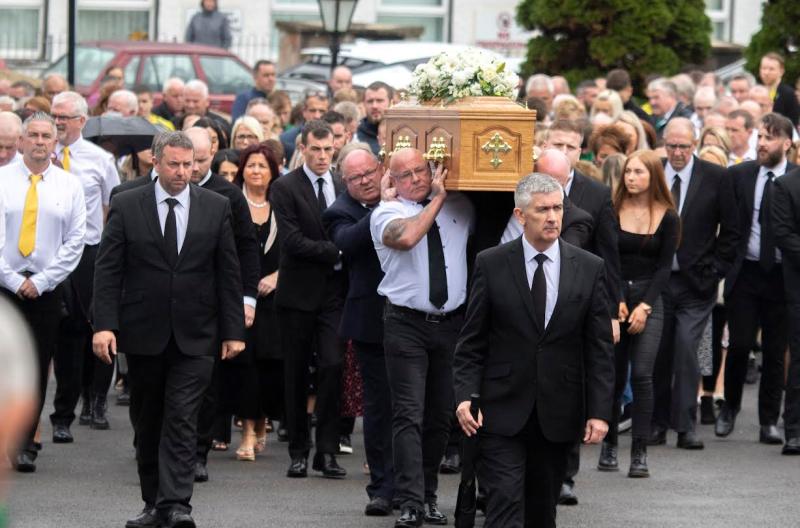 The remains of the late Martin Duffy, who tragically died during a family holiday in Greece, is carried to his resting place by family members Picture: NW Newspix

A palpable sadness and sense of loss enveloped St Patrick's Church, Murlog, Lifford this yesterday as hundreds of mourners came to pay their final respects to the late Martin Duffy who died following a tragic swimming accident while he was on a family holiday in Greece earlier this month.

The late Mr Duffy, formerly of Liskey, Ballindrait and who lived in Coolatee, Lifford, worked as a lecturer of plumbing at the North West Regional College in Derry.

He was a well-known football administrator and manager as well as the long-standing Deele Harps club man. In recent years he had been to the fore in the development of the club’s new pitch in Ballindrait. He was also the Lifford Area representative on the executive committee of the Donegal Junior League.

The huge cortege was accompanied by people from all walks of life family, friends including representatives from the late Mr Duffy's workplace, colleagues from the sporting world including Football Association of Ireland representatives Trevor Scanlon and Brian Dorrian and Finn Harps manager Ollie Horgan.

Young players from Deele Harps FC and Donegal Schoolboys formed a guard of honour at St Patrick's Church, Murlog as the coffin was brought into the church to the song Wish You Were Here by Pink Floyd. The church itself was packed to overflowing with in excess of 100 mourners outside also.

Items depicting the various interests in Mr Duffy's life were placed on a table near the alter by Patrick Duffy, Michael Melaugh, Curtis Friel, and Oisin Duffy. These included a football, a Celtic FC scarf, a bandana, and a family photograph, symbols of his life and loves.

A former neighbour and family friend, Rev Francis Lynch OP CC, Crossroads officiated at the Requiem Mass. He welcomed everyone who had travelled to be with the Duffy family that day.

In his homily, Fr Lynch spoke of the wonderful memories he had of the late Mr Duffy's late parents, Ethna and Pat who he described as "living witnesses to the Gospel".

He told how he met with his future wife at Raphoe Tech, now the Deele College and how they knew they were made for one another shortly after that.

He also spoke of his time in the Irish Army and how he had won the best soldier award during his time there. He talked about him working with Eunan Colhoun then his brother-in-law, Eamon Melaugh, and how he also worked in St Helier, Jersey before going back to education at the North West Regional College in Derry where he obtained plumbing qualifications and began working in that field

A teaching vacancy arose at the same college and he applied for and got it and stayed there for over 30 years lecturing in plumbing, bringing young people into that very necessary trade.

"Martin was a perfectionist. Everything had to be done right or not at all and I suspect since he demanded these standards of himself, he would have expected the same of his students, all or nothing, so I would say there were very few failures in examinations," he said.

"He ate, slept, and drank football, keeping Deele Harps on the field, keeping soccer alive not only in the Deele Valley but in the valleys that are around it. He was greatly involved in the construction of the new football field in Ballindrait, raising funds for it and looking forward to it opening up again. He was also an avid Celtic supporter." 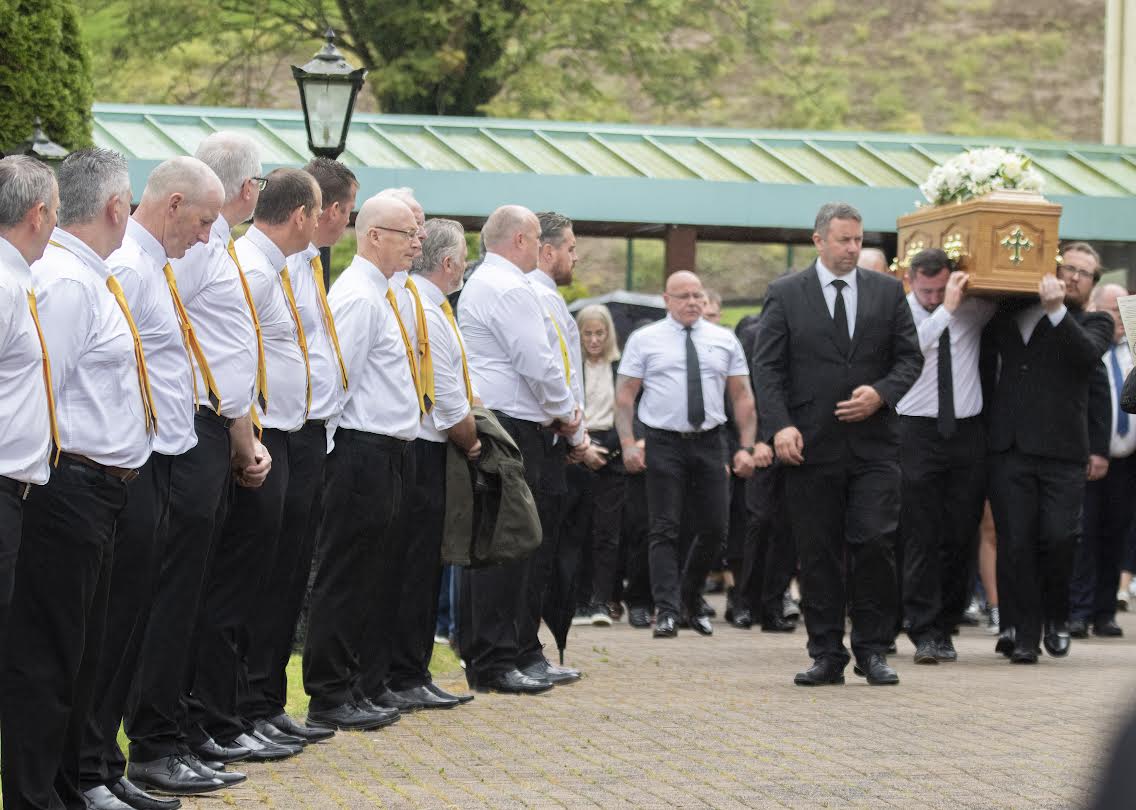 The remains of Martin Duffy are carried past a guard of honour by members of his beloved Deele Harps Picture: NW Newspix

He also spoke of his great love for his wife Marie; children, Nicky, Jordan, and Jade, and grandchildren, Eli, Bonnie, and Nate, and the fun family times they enjoyed together. He reminded the congregation that Mr Duffy also had a great love of music and poetry, something instilled in him at Raphoe Tech by a teacher, Mrs Cunningham.

The tragic events that led to Mr Duffy's untimely death were also referenced by Fr Lynch.

"Martin's life was cut short, he died too soon out in Greece on what should have been a quiet holiday before the new academic year began. He got into difficulties and although help was immediate - there were three doctors on the beach, nurses and the ambulance came quickly - it was not to be."

He added everyone was numbed and shocked when the news arrived back in the Clonleigh parish and beyond his sad passing.

"Martin spoke directly about anything he believed in and this big crowd today is living witness to the respect in which he was held.

"His death will reverberate in generations of the Duffy and Friel families for generations to come. He will be very sorely missed not least of all by Marie, the love of his life and his children, too young to lose their daddy who was always cheerful and full of life. Martin spoke directly about anything he believed in and this big crowd today is living witness to the respect in which he was held," he said.

The late Mr Duffy was interred in the adjoining graveyard after the Requiem Mass.