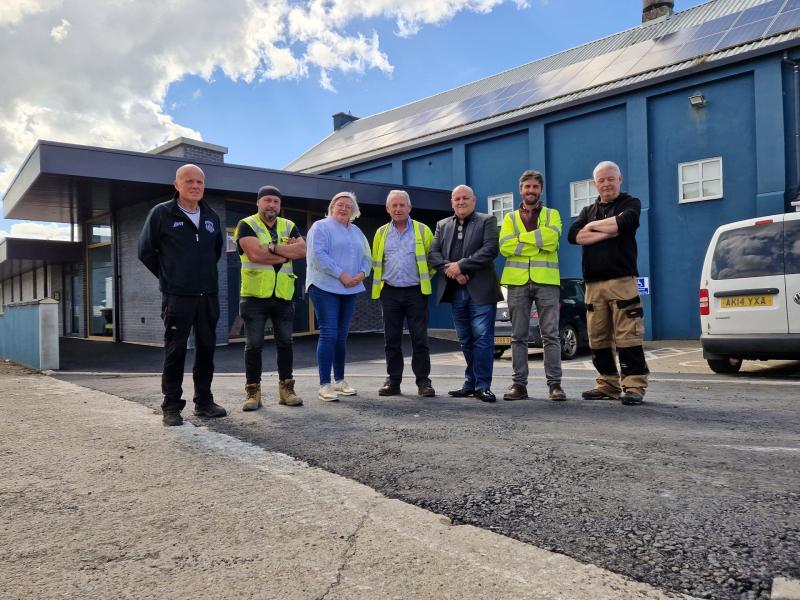 A Dungiven community group has benefited from an act of generosity from the main contractor responsible for carrying out the works on the new A6 dualling from Dungiven to Derry.

SWS are the contractor carrying out the £220 million scheme which will see the completion of 25.5 kilometres of dual carriageway connecting Dungiven and Drumahoe.

The SWS group have donated 200 tonnes of ashpalt to provide a finished surface for the car park at the Glór Dhún Geimhin building on the Main Street of Dungiven.

Speaking to the County Derry Post, SWS Public Liaison Officer Tony Lowe spoke of the act as a thank you to the community of Dungiven, “Maria from Glór contacted us and we met here and had a look at what work needed done and so I went back to my colleagues and they agreed that we would supply the tar for the job.

“We had supplied stone for the car park earlier on in the project and that meant the people here were able to get it ready for when the tar was ready.

“We are closing down the tar plant now at Ovil and before we did we wanted to fulfil our promise. It is a great project here in Dungiven and it helps them get the building back up and running again.”

The work on the major project has been almost three years in the making and SWS were keen to acknowledge the understanding of the local community for any disruption endured over that time.

“It is a way for us to say thanks to the people of Dungiven for their cooperation and patience during the long contract here,” said Tony.

Local councillor Sean McGlinchey had liaised between the Glór representatives and SWS to help bring the act of generosity about and said, “Full credit goes to SWS for all the community engagement they have had. It has been second to none.

“I'd like to thank the contractors on behalf of the Dungiven community because if any issue at all was raised these people were quick to respond and they have been very fair,” added Councillor McGlinchey.

Speaking on behalf of Glór Dhún Geimhin, interim chair Seamus Ó Donnghaíle added his appreciation, “Clearly we are delighted with the work here. It's a shining example of the social responsibility that the contractors had to I suppose practically express their gratitude to the community.

“But we really are blown away by their generosity. We have a town that has come through an awful lot over the past three years in terms of disruption and this is a good news story about this new road which I think is important. The volunteer committee here at Glór Dhún Geimhin are trying to create something long term that provides a community hub and a cultural hub and this gesture has lifted a lot of worry for everyone.

“It is a weight off our shoulders to know that the car park and surrounding grounds are all presentable. We are deeply grateful to the contractors and to those local representatives who liaised with Maria here at Glór to pull a 'rabbit out of the hat' so to speak for the good of the community.

Maria Ní Mhaoláin from Glór Dhún Geimhin added her thanks to SWS saying, “This work was always going to be a luxury in terms of our budget and so this gesture just makes it a finished job and a worry off our shoulders.

“The contractors were absolutely brilliant from day one. Tony in particular was a great support to us and he was really helpful, as was Seamus Canning the contractor who laid the asphalt for us.

“It is just a great help to get this work done and makes the building accessible for everyone,” said Maria.