A petition has been launched to move the starting point to the Maiden City.

A petition has been launched calling on Translink to rethink the start and end points of a special service laid on to transport Derry GAA fans to Dublin for this weekend's All-Ireland senior football semi final clash against Galway.

Translink announced the route last week, with adult return tickets costing £32.50, but rail campaign group Into the West has launched a petition for the route to begin and end in Derry itself.

"Translink are providing a Special train to take Derry supporters to the All-Ireland semi-final at Croke Park on Saturday 9th July," said the petition's blurb on the change.org website. 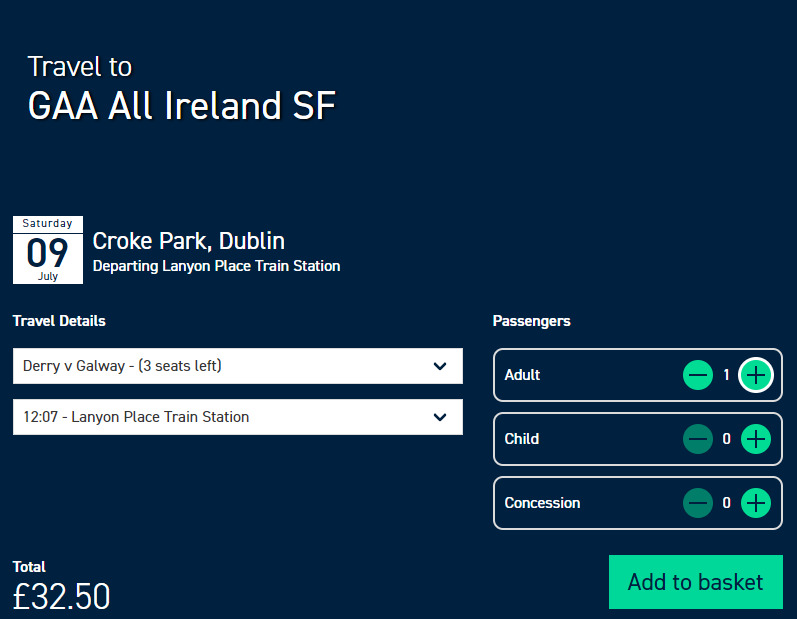 A screengrab showing the train service departing from Belfast.

"Farcically, however, the organisation has decided that the train should start and end in Belfast - 30 miles from the Antrim/Derry border, 70 miles from Derry City and 52 miles from Coleraine.

"It makes no sense to offer a special train to Derry supporters that goes nowhere near County Derry and which stops in Lurgan, Portadown and Newry instead.

"Special trains have run from Derry through to Dublin in the past (e.g. for the Pope's visit in 2018). And Translink provided a special train from Portadown last month for Armagh GAA supporters to attend their All-Ireland Quarter-final.

Please sign this petition to tell @Translink_NI it's unacceptable that a 'special' train to get @DoireGAA supporters to Dublin this wknd starts & ends in Belfast = 30 miles frm Co.Derry, 70 miles frm Derry City & 52 miles frm Coleraine. If it's for Derry it must travel frm Derry! https://t.co/HZRJQfFuyz pic.twitter.com/0pJYdekt52

"There are no insurmountable technical reasons why the Special train for Derry supporters can't start in Derry city and stop at Coleraine on its way through to Dublin - even within the usual Saturday schedule.

"All that is lacking is the will from Translink to ensure that this can happen.

"It is absurd that Translink think Derry supporters will accept a Special train service that goes nowhere near their county."

As well as demanding the change in start and end point, the petition calls on Translink to ensure the train stops at Bellarena and Coleraine en route to Dublin.

It also calls on local elected representatives to liaise with Translink to agree 'as a matter of urgency'.

"The people of County Derry will not accept a second-class service from a transport company that appears unwilling to cater for life beyond Belfast," they added.

Foyle MLA Sinéad McLaughlin said she had written to Translink on the issue.

"I've written to Translink to raise these concerns and urge them to extend this service to Derry," she said.

I've written to Translink to raise these concerns and urge them to extend this service to Derry.

While a bus is available from Derry, train offers a more comfortable and accessible journey for many. Not to mention the fact that the train would service a different range of stops. https://t.co/88sLQm3EPz

"While a bus is available from Derry, train offers a more comfortable and accessible journey for many. Not to mention the fact that the train would service a different range of stops."

Translink have organised three special bus routes departing for Dublin on the morning of the game from Foyle Street, Derry, Dungiven and Maghera.

A company spokesperson said they would look at requirements for the return journey as the week goes on.

"We are operating a number of transport options to the GAA all Ireland football semi-final in Dublin on Saturday," they said.

“There are coach specials leaving Foyle Street in Derry~Londonderry, Dungiven and Maghera to Dublin.

“A rail special is also running from Belfast to Dublin (return) on Saturday for those wishing to travel by train. Passengers can use scheduled services to connect with this train.

"We will assess requirements from bookings for onward connections for the return journey as the week progresses, subject to demand.”