Changing the way you shop, cook, and eat really could change your life

Changing the way you shop, cook, and eat really could change your life – just like it did for Derry woman Jeanie McCauley from Creggan, who’s lost more than 6 stone by embracing Food Optimising, Slimming World’s unique eating plan.

Jeanie, who’s gone and lost 6 Stone 10 pounds in a year says: “I feel like a new woman since losing weight – in fact, I look so different that people who I haven’t seen for a while often can’t believe I’m the same person. I have to say though, it’s the change on the inside that’s been the greatest – I’m happier, healthier and much more confident now.”

The proud Creggan lady joined the Iona evening group, which is run by Jacqui Doherty, at the end of April 2021.

Jeanie says: “My weight impacted on so many aspects of my life, from struggling to find clothes that I liked to fit to not being able to do simple everyday tasks without feeling tired and out of breath. Before I lost the weight I was just existing, now I’m full of life and can do so much more”

Jeanie’s weight was also putting a huge strain on her health.

She suffers from mobility issues. She is unable to walk any distance and flies along in her mobility scooter. She is on the waiting list for a hip replacement operation. My Surgeon had told me that I had to lose 4 Stone before I would be considered for the operation.

After seeing a poster & then receiving a leaflet from the consultant, Jeanie decided to join her local Slimming World group. She says: “I was so nervous before my first session. I didn’t have to be worried though, everyone there was so friendly and made me feel so welcome, especially my Consultant Jacqui and after listening to people talk and share their experiences that week, I realised everyone there was in the same boat – they understood what it felt like to struggle with your weight and were all working together – and helping each other – to achieve the very thing I wanted to, to lose weight and keep it off for good. I have to say I was very relieved that my weight was confidential, too – I’d had visions of having to tell everyone how much I weighed!

“I’ve made so many friends at the group and I honestly don’t think I could have done it without their support each week. We all support each other with new recipes and tips and if anyone is ever struggling, we are always there to remind each other how far we’ve come. “ 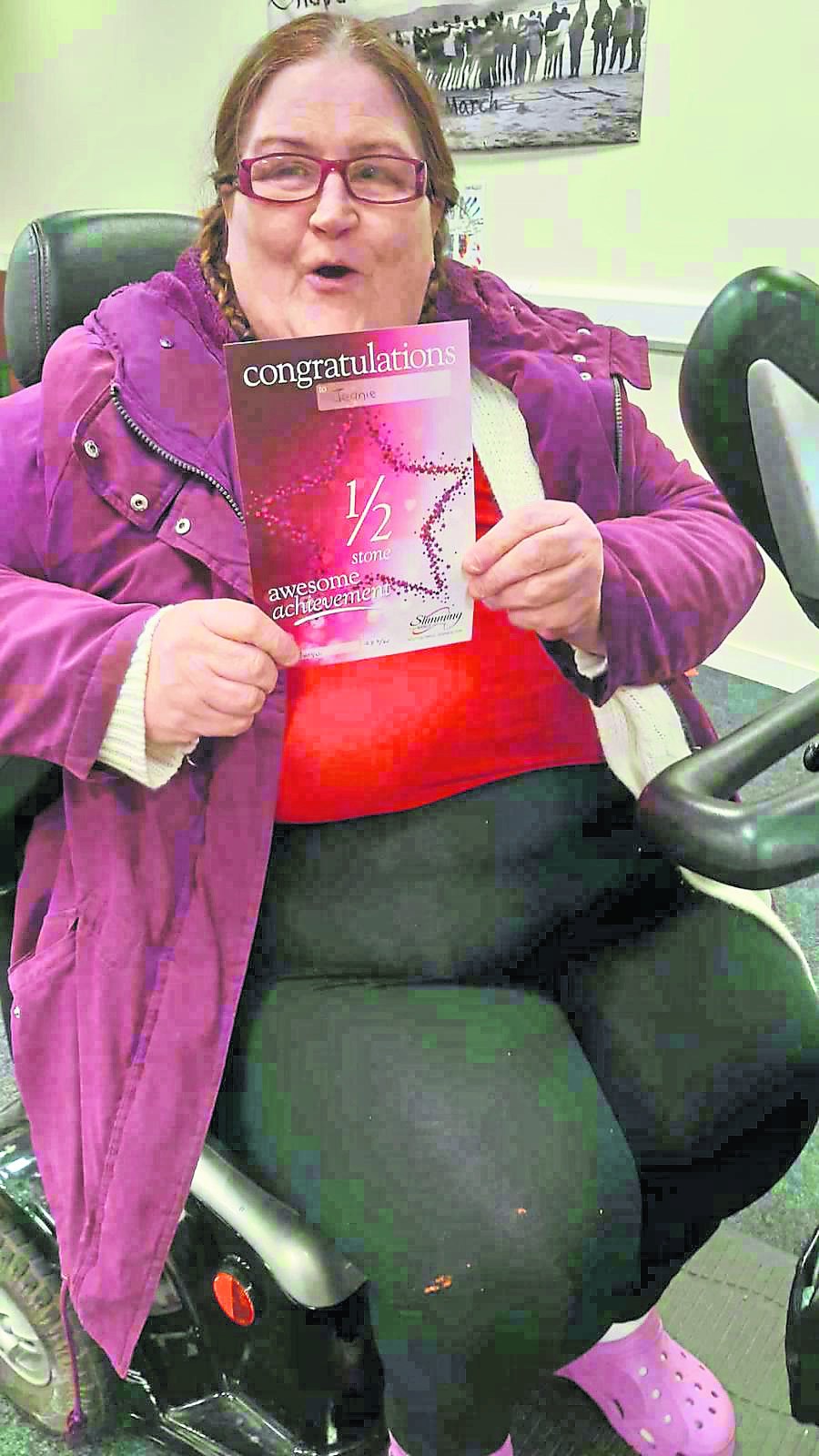 Chatting things through in group and listening to others has really helped me to understand my own challenges and motivations when it comes to losing weight and their support has helped me to believe in myself more, without that I don’t know if I’d have been able to make the changes and achieve the things I have. There’s nothing quite like being together in group.

Jeanie followed Slimming World’s Food Optimising eating plan and swapped fry ups for home cooked meals with plenty of veg.. She says: “People think to lose weight you have to go hungry, it’s not like that at all with Slimming World though.

"I love food and it’s never once felt like I was on a ‘diet’ – in fact, people are always surprised that I still eat food like pasta, potatoes and rice and can’t believe I’m losing weight eating so much delicious food, without ever feeling deprived. I still enjoy all my favourite meals, I’ve just learned how to make small changes like using lean meat or cooking with low-calorie spray instead of oil or butter – and they taste so much better.”

She also more active and enjoys going to the gym where her personal trainer tailors the exercises to suit her..

“My Orthopaedic Consultant is delighted that I have lost the 4 Stone he requested plus more. I hope to be getting my operation in the near future. She says: “I’m the fittest and happiest I’ve ever been – and I’m looking forward to living every moment to the fullest now!”

Jacqui, who runs the Iona Slimming World evening group, says: “I feel so privileged to have played a part in Jeanie’s transformation. She has come so far, especially over the last year which has been so challenging for many of us. And while so much has changed, Jeanie’s determination and motivation has remained the same and I couldn’t be more proud of everything she has achieved – she s a real inspiration to the whole group. 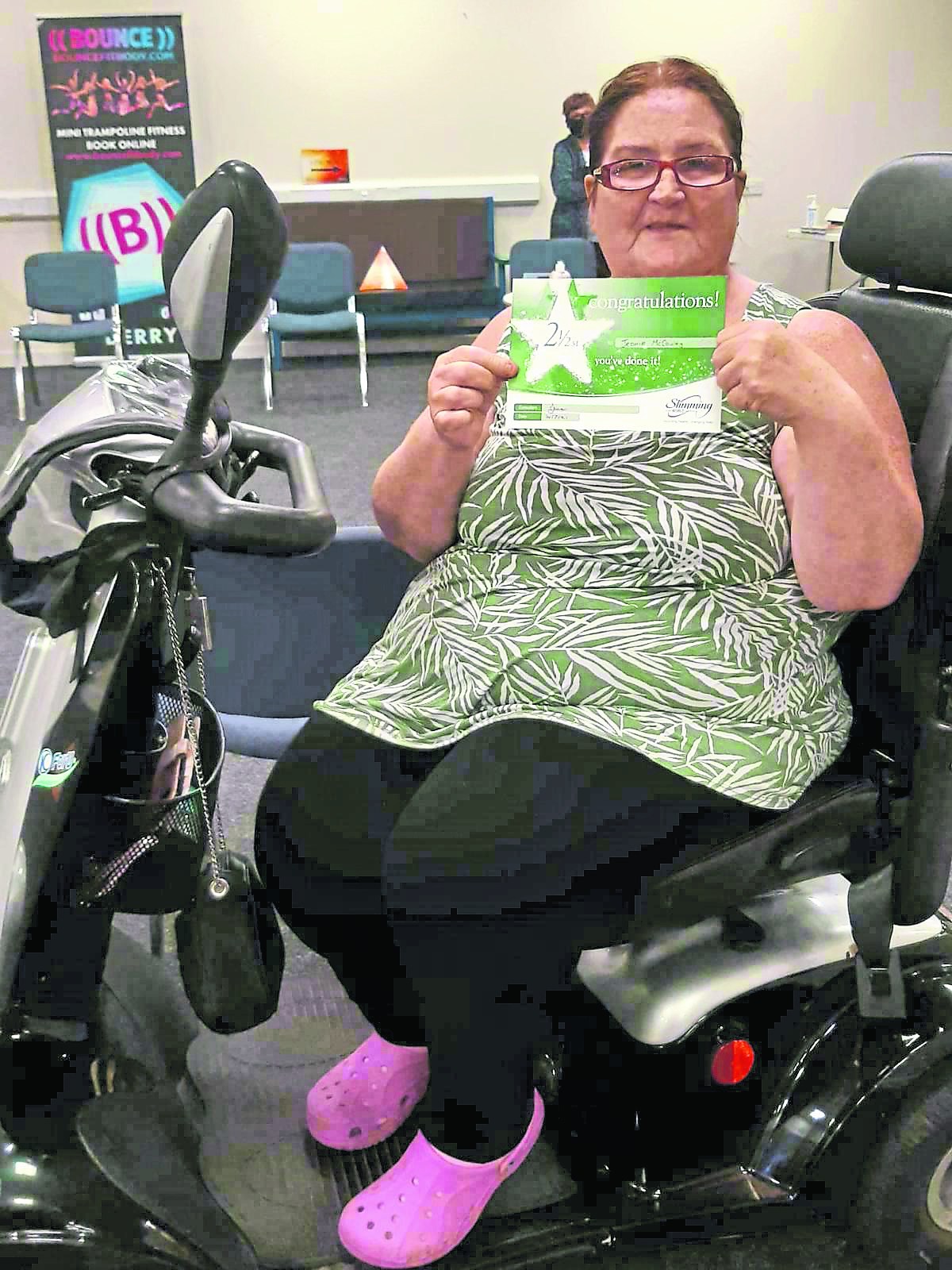 Keeping up the good work!

“Given the links between COVID-19 and obesity and the impact of lockdown has had on our health and wellbeing, I know lots of people are worrying about their weight more than ever before, so I really hope Jeanie’s weight loss inspires people in Derry and show them that now is a great time to take the first step of their journey. There’s a whole group of people waiting to support them every step of the way – and absolutely no judgement.”

The SW IONA Slimming World group is held every Wednesday at 5.30.pm To join or find out more call Jacqui on 07400613449. To find out more about joining your nearest group,– visit www.slimmingworld.co.uk or SlimmingWorldDerry