Margaret McAnaney was killed a month before Civil War broke out 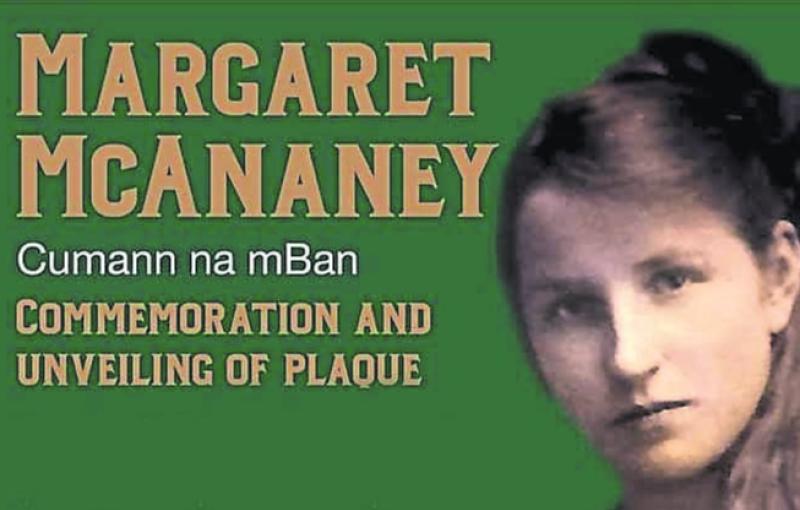 Margaret McAnaney was killed a month before Civil War broke out

A plaque in honour of a young Derry member of Cumann na nBan killed a month before the Civil War began is to be unveiled in the city tomorrow night.

Margaret McAnaney, affectionately known as Maggie, was killed in a shooting incident at Burnfoot in Inishowen on May 31, 1922.

From the Bishop Street area of the city, she was aged just 18. The IRA said she was 'on active service' at the time of the fatal incident.

The plaque will be unveiled at a ceremony, organised by the Bogside and Brandywell Committee, being held on Tuesday evening (31st May) at 7.00pm at Ardfoyle, Bishop Street, where her home once was.

She is buried in Derry City Cemetery with her father, Robert, and grandparents John and Matilda. Her mother was Catherine Campbell.

One hundred years after her death, mystery to an extent still surrounds the events that led to her untimely demise.
Relatively little is known of her demise. Her death coincidentally took place on the same day as that of Cumann na nBan, Margaret McElduff’, who was also killed in an accidental shooting in neighbouring Tyrone.

The local teenager was the daughter of city councillor Robert McAnaney, a member of the first city’s first nationalist led Corporation under Mayor Hugh C O’Doherty in 1920. He was a tailor by profession and a member of the IRA. The family’s home was 245 Bishop Street.

According to the account given at the official inquest by her friend Maggie Canning from Bluebell Hill Terrace in the Brandywell area of Derry, Maggie McAnaney called to her home at 9.30am on the morning in question and they left from there with five other girls to travel to Inch Island for a picnic.

On the way they hitched a lift on a Ferguson’s lorry as it drove through Bridgend. The vehicle was then halted at an IRA checkpoint at the Rectory at Burnfoot.

As they waited for the lorry to be given permission to move away again, both Maggie McAnaney and Margaret Canning had a friendly chat with the IRA guard who they both knew well. According to Miss Canning as they talked, the sentry put the butt of his rifle on the ground as he talked and at that the lorry driver told everyone to sit down again as they were about to continue the journey. 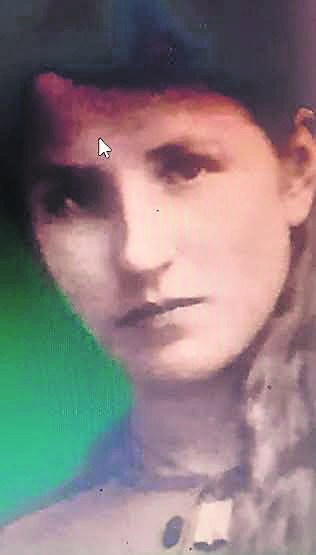 Margaret McAnaney was 'killed in action' when she was accidentally shot.

As this happened, a shot rang out and Maggie McAnaney fell to the ground, fatally wounded.

She had been hit by a round accidentally discharged from the IRA man’s rifle. The IRA officer at the inquest offered sympathy and said that the sentry responsible could be produced for questioning if required. The inquest chairman said that wasn’t necessary and a verdict of accidental death was recorded.

However, an inscription on the young woman’s headstone declares she was ‘Killed in Action’ – an epitaph normally reserved for those engaged in activities on behalf of the republican movement.

The official date given for the beginning of the Irish Civil War is June 28, 1922 – a month after the death of Maggie McAnaney.
Tensions over the imposition of Anglo-Irish Treaty and partition were obviously high and in Derry city and nearby Donegal, like the rest of the island, the IRA were split. Documents and discussions about applications for the IRA pension years later revealed that there was much debate on whether the Derry IRA was in fact neutral when the Civil War began.

Whether the ill-fated picnic trip to Inch was a ruse for other activities, the inquest verdict was a matter of expediency, or whether it really was simply a case of a tragic accident remains unclear a century later.

Whatever the reason, Maggie McAnaney was just 18-years-old when she died.

The young Derry woman is not alone in that her memory has been largely obscured from the role she played in the fraught political atmosphere of the first two decades of the 20thth century. 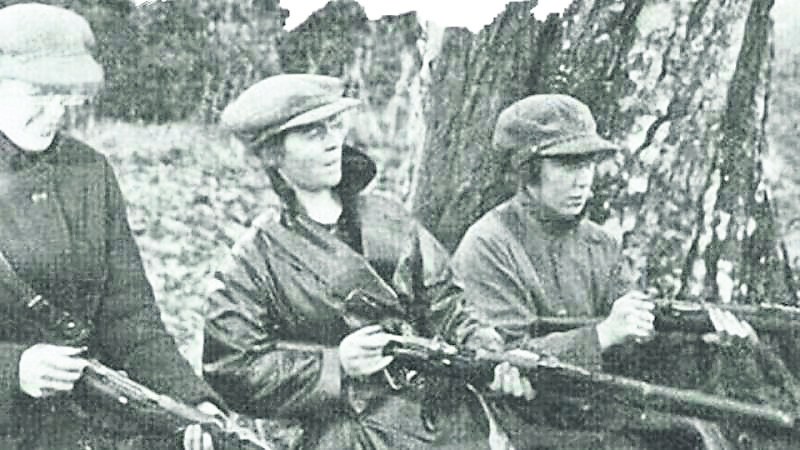 In an era when the women’s movements were striving for universal suffrage, the most famous example of this elimination from history remains the literal removal of Nurse Elizabeth O’Farrell from a photograph as she accompanied Padraig Pearse when the rebels surrendered to General Lowe on Dublin’s Moore Street at the conclusion of the Easter Rising in 1916.

Following the enrolment of women in the ranks of the Irish Citizen Army in 1913 and the formation of Cumann na mBann in 1914, it became clear that female republicans were willing to bear arms and take the same risks as their male counterparts.
However, during the 1916 Rising, for example, women were almost all confined to cooking, first aid, ferrying messages and signalling duties.

Some women, of course, managed to overthrow the patriarchal control of the movement and played a full role in the fighting. Constance Markievicz and Margaret Skinnider were the exceptions to the imposed norm of female roles in these times. No women were killed in the fighting at Easter 1916.

Despite claims that Nurse Margaretta Keogh was a republican casualty, it isn’t true. Although she was definitely killed by the British Army during fighting at the South Dublin Union, she was a civilian nurse and not attached to the republican forces and was not a member of Cumann na mBann.

Five years later, during the War of Independence, women undertook the dangerous roles of arms and explosives transportation. But only one citation of women playing a direct role in attacking the British emerged from the entire era.

That came, it seems, during an IRA attack on the Royal Irish Constabulary barracks at Killmallock, a town in south Limerick on the border with County Cork. One IRA man recalled 'the Cumann na mBann women used a rifle… and boiled kettles as required'. 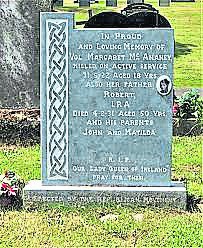 Margaret McAnaney was laid to rest in Derry City Cemetery.

Others contend however that the recurring argument, particularly during the centenary commem- orations of 1916, that women were com- pletely written out of history in this era is incorrect.

Whilst forbidden from taking part directly in battle, republican women were still, of course, at risk of serious injury and death during encounters with the British, and several members of Cumann na mBann were killed during the Irish War of Independence.

Josephine McGowan was from Dolphin’s Barn in Dublin and served as a member of the Marrowbone Lane Garrison during the 1916 Rising.

On September 22, 1918 Josephine attended a Cumann na mBann rally at Foster Place in Dublin to protest against the internment of republican prisoners.

The Dublin Metropolitan Police baton charged the crowd and McGowan was struck several times on the head. Rescued by her comrades, Josephine was ferried to the Cumann na mBann medical post at Ticknock but died there a week later as a result of her injuries and was buried without fanfare at Glasnevin.

As a result of her death, her father died a week after his daughter. It was not until the 1940s that Josephine Mc- Gowan was post- humously awarded a War of Independence service medal. It bore a ‘Comhrac’ bar – a symbol of recognition normally reserved for male fighters. 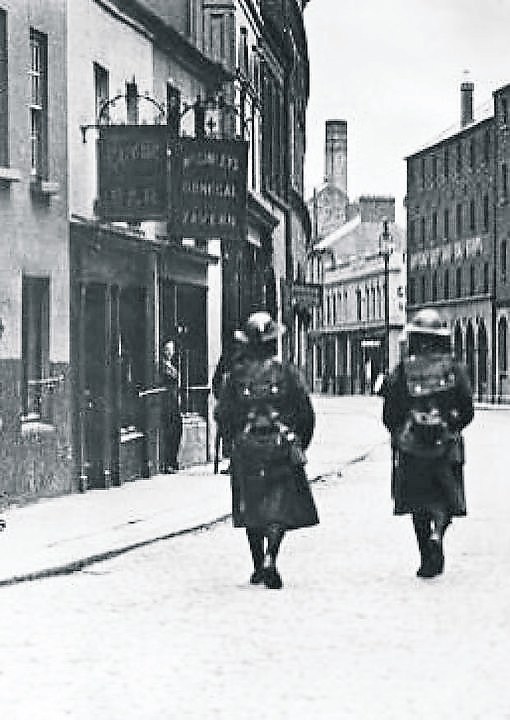 Margaret Keogh was a 19-year-old printer's assistant and at around 11.15pm on the evening of July 10, 1912 she was fatally wounded by a gunshot during a British Army raid on her Ringsend home. It was the night before the truce in the War of Independence was announced.

A captain of the Croke Ladies Hurling Club, a member of the Irish Clerical Workers Union and a member of Cumann na mBann, a year prior to her death, Margaret Keogh had been arrested by British forces for refusing to give her name in English when she was interrogated about her fundraising activities for Conradh na Gaeilge, then a proscribed organisation.

Her funeral was on July 14, 1921 and she was buried with military honours at Glasnevin by her Cumann na mBann comrades. For her pains, her gravestone is inscribed ‘Margaret Keogh – Died for Ireland.’

On May 31, 1922 Cumann na mBann member Margaret McElduff, from Co Tyrone, died from her wounds after a gun she was transporting for the IRA accidentally discharged.

In the same year, Nora O’Leary died in similar circumstances in County Kerry when IRA Commandant Denis Reen accidentally discharged his rifle in her home. 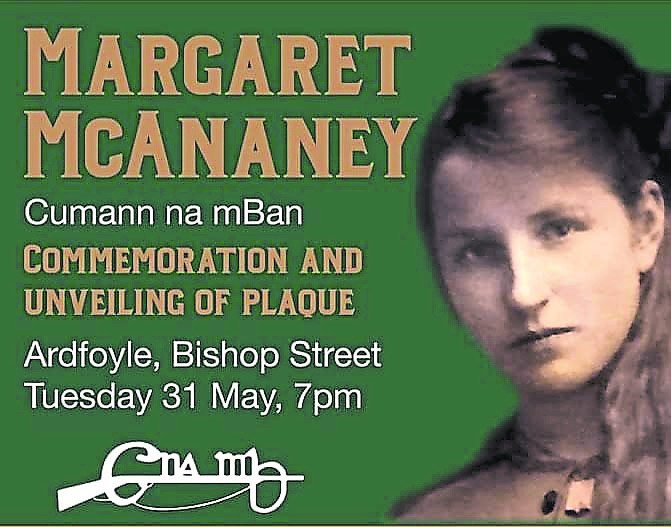 An Internet search of records about the deaths of Margaret McElduff and Nora O’Leary, however, revealed precious little on the details of their deaths.

As the War of Independence turned into the Irish Civil War women, most likely through military necessity, women were allowed to play a fuller role in combat.

The first Cumann na nBan woman killed in that bitter conflict was Mary Hartney, of Limerick City, followed by Lily Bennett and Charlotte Despard from Dublin, Margaret Dunne from Cappaleigh South in West Cork and Nan Hogan of Cratloe in County Clare.

Today, there are national monuments to Constance Markievicz, the boys of Na Fianna Eireann, but none to Cumann na mBan nor the girls of Clan na nGaedheal Girl Scouts.

In the period between 1918-1921, three more members of Cumann na mBan were killed.