An estimated crowd of over 17,000 gathered in Belfast for the 'Lá Dearg'. 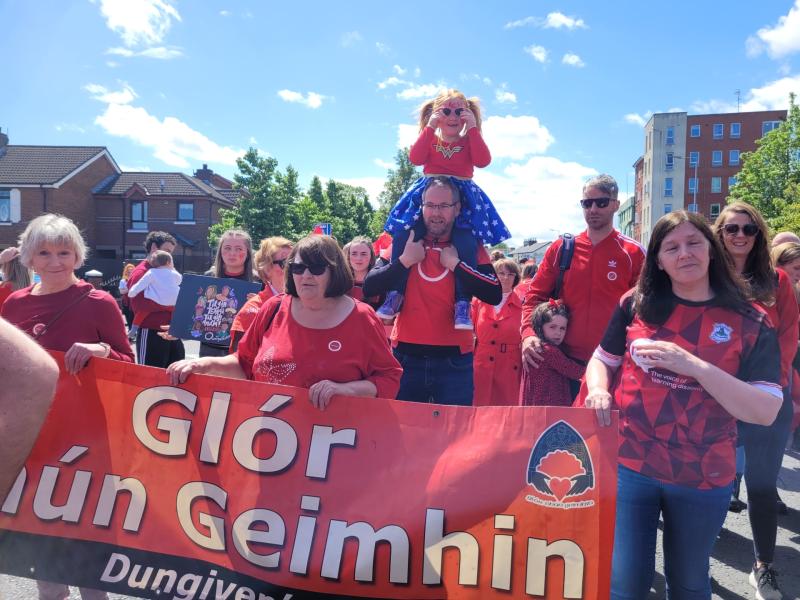 The event labelled “An Lá Dearg”  left from Cultúrlann McAdam Ó Fiaich and walked to Belfast City Hall where speakers and singers called for equality and recognition for the Irish language here in the form of strong, rights-based legislation as promised at St Andrews in 2006.

The teenager was only 11 when she took part in her first Lá Dearg in 2014, demanding a new secondary school in south Derry.

In 2017 she marched again and on Saturday she took time out of her A-Level preparations to address the crowd in Belfast.

“As a young Irish speaker I have seen first hand the transformative impact our community can have when we organise and challenge this state on their dismal record on language rights,” said Clíondhna.

“They told us in 2014 we couldn’t have a secondary school in Derry so we took to the streets. Our public campaign succeeded and in 2015 we opened Gaelcholáiste Dhoire with 13 students.

"Now almost 300 students have come through our doors, and as a member of the first year group, I am now finishing my journey.

"None of that would have been possible without a community campaign for equality and rights, without Irish speakers demanding better, demanding an Irish language Act.

"Now it’s time for our generation to play our part, to organise and demand a society that not only recognises us, but celebrates our native language as a central part of our diverse society and provides space for us to flourish.

"We now have a community of young, confident and educated Irish speakers standing up to protect and promote an Ghaeilge, and we won’t take ‘no’ for an answer.”

Also in attendance was Aontú Representative for East Derry Gemma Brolly who spoke about the importance of Lá Dearg.

“On 21st May 200, the Irish language Community took over the city of Belfast” explained Mrs Brolly.

“More than 17,000 people walked together “red with anger” that the legislation which was promised over 20 years ago is still not in place.

"We heard promise after promise, deadline after deadline and yet we are still waiting. We are waiting on an Irish Language Act, on our human rights and respect.

"Respect so that we can speak our native language in our own country without being mocked or receiving bad manners, so that we can access services through Irish, so that when a child attending an Irish medium school is never without access to resources or support just because they are not educated solely through English.

"We only seek equality, like other countries, such as Wales.”

Gemma continues: “There is an image out there which suits the agenda of some that the Irish language is not for everyone however there is a great deal of evidence to suggest the complete opposite. The Irish language is for everyone, everyone wishing to learn, hear or speak it. There is of course absolutely no pressure to do so, neither will there be.”

Describing her own experience, she explains: “I began my Irish language journey as a secondary level pupil at Loreto College, Coleraine and to be honest, I believe I would not be where I am today had I not had the opportunity to go to the Gaeltacht – where my love and capabilities grew aside school.

"Today however, not every pupil is able to study Irish for GCSE or A-level and receive financial support to assist them in going to the Gaeltacht with schemes such as Líofa.

“On the other hand” she states, “my own children now attend a Gaelscoil and are part of 'Carntogher' community. My daughters walked with me 5 years ago at Lá Dearg and they walked with me again at the weekend.

"It was a great day, full of positive, determined energy that we stand together always and that we will have equality. We stood proudly listening to the different people on the stage speaking at City Hall, they listened to a past pupil of mine with stars in their eyes, full of inspiration and pride.

"They learned that when something is not right or fair that they should stand and speak out against it, that they must be brave and take a stand.”

Mrs Brolly concluded: “There is so much happening at the minute and I have heard the question put again and again-is Irish language legislation more important than this, this or this? This frustrates me greatly.

“No-one ever made you choose between education and health, or between a house or a job, why are people placing Irish language legislation in this ridiculous scenario?

"There are many issues to be worked on and improved but this is about principle-if you make promises, you must fulfil them as soon as possible; everyone deserves their human rights, regardless of colour, creed or language; if you are not happy, if you do not agree with something, do not sit back waiting on someone to speak or act on your behalf, stand proud and tall and speak out!

"That is exactly what over 17,000 people did at the weekend, red with anger and we will not stop until we, the Irish language community have equality.”