Local boxing champion was 'a Bellaghy man at heart'

Remembering Mickey Diamond and his legacy. 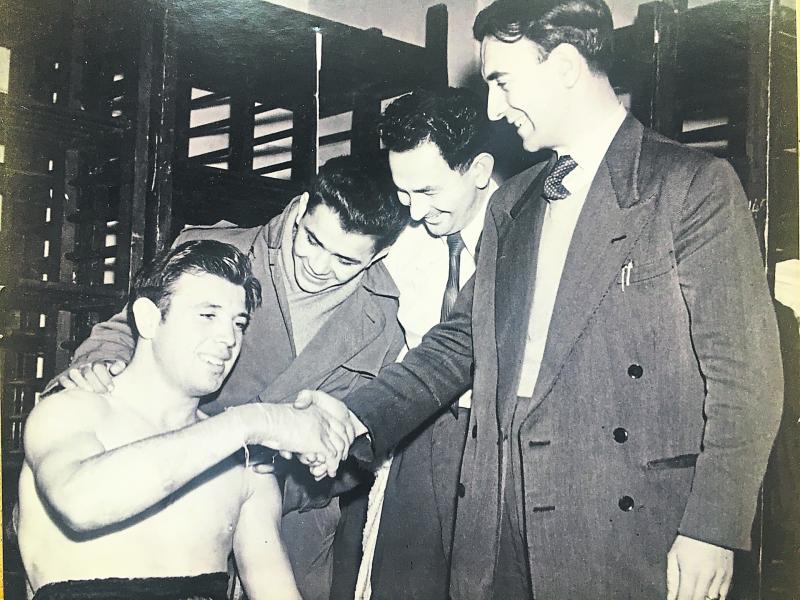 Mickey Diamond is congratulated in the dressing room after winning the Ulster Heavy Weight title in 1951. He is pictured with 'Spider Kelly' from Derry who was World Champion at that time.

Mickey was born in Ballyscullion, Bellaghy in 1929. He had celebrated his 93rd birthday recently on the 18th of March just a few weeks ago.

Mickey was a farmer’s son, one of a family of ten children. Mickey was named after Fr. Michael O’Neill who was parish priest of Lavey and a close relation of his family.

Mickey was a very well-known and very successful amateur and professional heavy weight boxer, a product of the powerful Bellaghy boxing club of the fifties a member of the great sporting family of Diamonds which had produced such talented Gaelic footballers as Lawrence, Tommy Diamond, Karl, an All-Ireland Medallist with Derry.

Mickey also played Minor football for Bellaghy in the late 1940s and was part of a very successful team that won many championships.

Fr Pat Kelly from Ballinascreen started Bellaghy Boxing Club in the early 1950s. During this period, it was one of the most successful boxing clubs in Ireland.

In 1951 Mickey was crowned Ulster Heavy Weight champion in the Ulster Hall, Belfast beating two boxers on the way that night. This was no mean feat. He was both a junior and a heavy weight champion.

In July of 1951, Mickey was contacted by Jack Solomons, an International Boxing Promoter based in London. Solomons has been described as “one of the greatest boxing promoters in history and “England’s greatest boxing impresario”.

As a result of this meeting, Mickey participated in a Professional Novices Heavy Weight Competition in Earls Court, London in 1951. Mickey also fought in the undercard of the Randy Turpin vs Sugar Ray Robinson Match, Earls Court on the 10th of July 1951.

Mickey fought in numerous professional boxing matches with great success and because of his boxing prowess and popularity at this time he boxed in many ‘exhibition boxing matches’ to raise money for parochial funds and local charities throughout Derry and beyond.

Michael was so modest he never talked about his sporting achievements preferring to talk about the achievements of others instead.

He met his wife Sarah Kennedy in the Castle Ballroom on Boxing Night in 1951. Sarah was a daughter of a well-known poultry exporter based in Derrychrier, outside Dungiven.

They settled in Dungiven and coincidentally Fr Pat Kelly was transferred from Bellaghy to Dungiven as curate at this time. During the mid-fifties Fr Pat Kelly and Mickey were instrumental in starting up Dungiven Boxing Club.

During the late 60’s and 70’s the foundations were laid for a more progressive and outward looking club which was based in the former ‘B’ hut at Ballyquinn Road, this has since been replaced by an up to date and modern Boxing facility.

During this time there were many infamous tournaments held in the Castle Ballroom in Dungiven with clubs taking part from all over Ireland. Kevin Lynch was also a past member of Dungiven Boxing Club.

Mickey trained the boxers putting his skills and knowledge to good use. In the 1980s, 90’s and up to the present day its members continue to compete in major events with good successes.

Mickey was first and foremost a family man. He was devoted to his wife, and he loved each one of his children equally and was so proud of their achievements.

He loved his grandchildren, sons in law and daughter in law too and loved to show his grandchildren boxing moves and often talked about ’catching the ball away above their heads’ as he often did when he played football for Bellaghy Minors.

Mickey was a very fit man, even in his later years. At the age of 80 he climbed Croagh Patrick in County Mayo with his daughter Carmel, and he participated in many pilgrimages to Lough Derg, Knock and Lourdes.

He also travelled to Rome with his nephew Joe Sweeney in which he talked about visiting St. Peter’s Basilica, the Colosseum and Pompeii.

He visited Auschwitz in Poland with his nephew Eoin Sweeney and talked about the great suffering that was evident in the concentration camp.

Mickey was a tremendous worker and during the 70’s and 80’s Mickey travelled to Kilroot Power Station, Belfast to work as a Steel Erector.

He left for work at 5.30am in the morning and wasn’t back to after six in the evening. Most of the time Mickey worked 7 days a week to provide for his family.

Mickey was also a familiar face at the Castle Ballroom in the 1960’s and 70’s where he worked on Sunday evenings to supplement his income, every penny counted when he had 8 children to put through school.

Mickey also spent time working in Sudan. He was involved in construction work relating to the building of a Hydro Electric Power Station on the River Nile.

He was fascinated with the culture and customs of this country and often spoke about his time there. Whenever Mickey was leaving to come home to Ireland, he stated that he left his work boots behind as the local workers had nothing on their feet when working on construction sites.

Although Micheal was away from Bellaghy for over 60 years he was still a Bellaghy man at heart. He loved visiting his relatives there and going to the Blessing of the graves each year.

Michael was truly a remarkable man in every way, he was a true gentleman, and his legacy lives on in St. Canice’s Boxing Club, Dungiven.

He was president of the Club and in later years would often go round to see how the young people were doing. He would often give them words of encouragement, praise and showed them some of his boxing skills.

They looked up to Mickey as a role model and his passing is a big loss to Dungiven Boxing Club, his native Bellaghy and of course his last remaining member of his family his beloved sister Jeannie Duffin and of course his dear children, Dolores, Michael, Carmel, Johanne, Concepta, John Joe, Louise and Paschal their spouses, grandchildren and great grand children.

May his soul rest in peace.

The County Derry girls will jet off to Italy in the early hours of Thursday morning.