Their success is also boosting standards in the classroom. 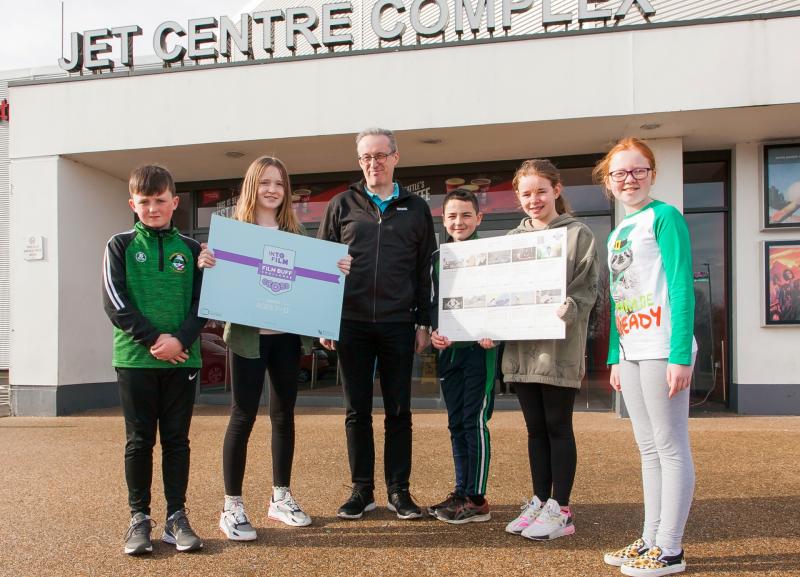 Pictured is teacher, Gary Lynch, who runs the school’s film club with (from left): Calvin, Sarah, Enda, Darcy and Aoife.

Pupils from a County Derry primary school have proved they are real film buffs after winning the top prize in a challenge organised by an education charity.

The Challenge has been curated to open a window to the world while enabling young people to watch and review short, accessible films to improve their literacy and critical thinking skills.

Pupils from St John’s Primary School, Dernaflaw enjoyed a free cinema trip to the Jet Centre in Coleraine as a reward for winning the top prize in the challenge.

Pupils were so inspired that they watched all the films and completed activities alongside them.

Teacher Gary Lynch, who runs the school’s Into Film Club, said he had seen real improvements in the children’s creativity and writing ability as a result of taking part in the challenge.

He said: “I loved the sound of this new opportunity to learn through film. I can’t speak highly enough of it, the enthusiasm you get from the children and the variety of learning. It’s just wonderful.”

With a selection of films for ages 7-11 and another for ages 11-14, pupils earn silver, gold or platinum awards by watching films and writing reviews.

As well as certificates along the way, Platinum Film Buffs are awarded a clapperboard keyring and are in with a chance of winning amazing prizes, including a class cinema trip.

Gary added: “I have to confess, as soon as we started this, I thought ‘we’re doing them all!’. And that’s going to happen this year too.”

Gary’s class watched a range of genres from the historic silent short The Georgetown Loop, made in 1903, to a story of family and autism in the animated My Brother Luca.

Films on offer include youth made films, documentaries, foreign language, Black and White and more. A range of educational topics and themes, such as mental health, the environment and racism, have been chosen to encourage rich and inclusive discussion.

“That’s the beauty of these short movies. You’re getting far better interactions with those children who would be more withdrawn, or wouldn’t be confident enough to answer,” he said.

If there is fraud on Council - go to the police, councillor told

A motion to pause lease and property deals was defeated last week.

Across the challenge, Gary saw real improvement in group discussions and in individual writing.

He said: “It was so heartening to witness the pride they have at the end of the challenge.

“Film Buff Challenge is a magic carpet ride through time, genres, countries and film mediums. It opens doors to other worlds and ways of thinking for young people and I can’t sing the challenge’s praises enough.”

The Film Buff Challenge, first launched to support home learning during the pandemic has been used by many schools across the North as a valuable tool for literacy learning.

With the welcome return to the classroom the challenge has now expanded with more short films available to every teacher.

A brand-new selection of Film Buff Challenge shorts are now available on Into Film+, the UK’s first streaming service designed for all school settings.

Hosting more than 250 films, it is unique in its additional educational content such as curriculum linked resources and exclusive videos.

These include screening Paddington 2 in class with a pre-recorded introduction for schoolchildren by director Paul King.

Into Film’s Sean Kelly said: “Film Buff Challenge is an exciting way for children to engage with the curriculum. As well as being fun, it’s a powerful educational tool that develops and sharpens analytical and literacy abilities, while providing a basis for thought-provoking discussion.”

Teachers wishing to take up Film Buff Challenge can visit https://www.intofilm.org/resources/1693 for details. Into Film are also offering free virtual workshops to introduce the Challenge. To book your class workshop email intofilmni@intofilm.org

There is no cost for Into Film+ however, all schools require a Public Video Screening Licence (PVS Licence) to screen Filmbankmedia films and watch any Into Film+ content.

Schools in receipt of Extended Schools funding can claim one of a limited number of PVS licences paid for by Northern Ireland Screen.

East Derry MLAs ask most questions in the county