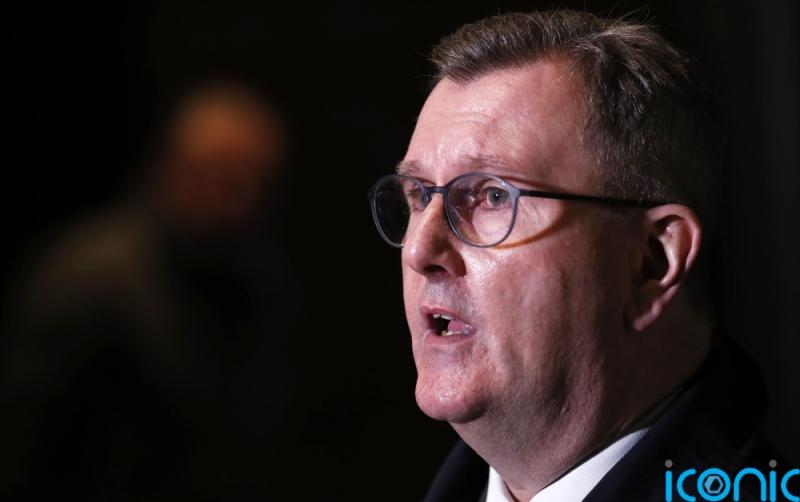 DUP leader Sir Jeffrey Donaldson has called on Boris Johnson to give a firm commitment that he will trigger Article 16 of the Northern Ireland Protocol if agreement cannot be reached with the European Union.

Sir Jeffrey has urged the Prime Minister not to be distracted by controversies within Downing Street and to give problems in Northern Ireland “the attention they deserve”.

After collapsing the Executive this week, the DUP threatened not to return to powersharing unless issues around the protocol are resolved.

On Sunday, Sir Jeffrey said he hopes the issues are resolved before the Assembly election scheduled for May.

He told Sky News: “It disappoints me that our Prime Minister cannot give a firm commitment today that if there is not agreement reached with the European Union, he will take the steps that are necessary to restore Northern Ireland’s place within the UK internal market.

“That means triggering Article 16. That’s the commitment I need to get from this Prime Minister.

“Let’s get our political institutions restored on the basis of sound foundations, that means dealing with the protocol, making these issues our priority so that the people of Northern Ireland can enjoy a strong, stable government.

“That’s what we expect of a prime minister. We can’t go on like this. We can’t go on with a situation where serious problems like we have here in Northern Ireland are not getting the attention they deserve.”

The protocol was designed to prevent a hard border on the island of Ireland, but has created new trade barriers between Northern Ireland and Britain in the Irish Sea.

The use of Article 16 would effectively suspend elements of that agreement.

UK Foreign Secretary Liz Truss and European Commission vice-president Maros Sefcovic are set to meet again in London next week to continue negotiations aimed at reducing the red tape associated with the protocol.

Sir Jeffrey called on the Prime Minister to take action “to protect Northern Ireland’s place in the UK”.

He added: “We can’t have political stability when the concerns of unionists are being completely ignored, when this protocol is harming our relationship with the rest of the UK and the Government is failing to act.”

Sir Jeffrey insisted he is committed to powersharing with other parties in Northern Ireland.

He denied the DUP would use the protocol to block a Sinn Fein first minister if it became the largest party after the election.

He added: “We can’t go on with a situation where the views and concerns of unionism, and unionist parties in Northern Ireland, are being ignored.

“But that means the protocol has to be dealt with, solutions need to be found.

“The sooner that happens the better, and I hope that before the Assembly election we will get an agreement on dealing with the problems and resolving the difficulties created by the Irish Sea border.”

In comments directed at Mr Johnson, Sir Jeffrey added: “You’re our Prime Minister and if you want to build confidence, then do what other prime ministers did in the past, recognise that we have a serious problem here.

“Instead of being focused on what’s going on in Downing Street, be the Prime Minister that people need – reach out to Northern Ireland help us to resolve these issues. Make this a priority.”