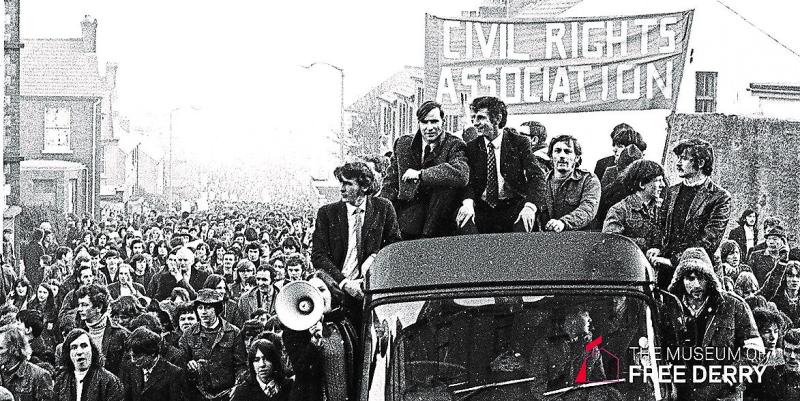 A special commemoration to those who lost their lives on Bloody Sunday will take place at the Garden of Reflection on Sunday.

The garden, located at the entrance of Glenfada Park (beneath the Civil Rights mural) close to where a number of victims were shot dead, is dedicated to the late Bishop of Derry, Most Rev Dr Edward Daly.

The 50th commemoration of those killed and injured will take the form of a floral tribute and large black flag draped over the garden's summer seat.

Vincent Coyle, son of the late Vinny Coyle, the well-known local Civil Rights campaigner and chief steward on many civil rights marches including the ill-fated January 30 1972 march, said: “We would like to remind the people the original march was not in support of any political organisation or paramilitary groupings, it was purely an anti-internment march because up to 90 per cent of those being interned were non-violent community activists and Civil Rights campaigners.

“If the British Government had taken the advice of the Civil Rights leadership we would not have been plunged into three decades of war during which many lives were lost.

“The Civil Rights campaigners and their non-violent methods achieved more than 30 years of violence.

“The Garden of Reflection was created in memory of the late Bishop Edward Daly, who was known as 'the Civil Rights' priest and attended many of the demonstrations organised by the Civil Rights Movement. His role on Bloody Sunday was iconic as his involvement was shown worldwide and helped to highlight the brutality of the British paratroopers on the day.

“The 50th commemoration will see a black flag draped over the summer seat and a floral tribute in memory of all those who lost their lives on Bloody Sunday.

“A small poster, alongside a Civil Rights badge, will be placed above the summer seat dedicated to the memory of Bishop Daly, Ivan Cooper, the organiser of the 1972 march, and Vinny Coyle.

“The chair is there to also represent all those involved in the Civil Rights Movement who have passed away and in support of the families for their great loss and those injured on the day, and as a reminder that the campaign for truth and justice will continue.”