A number of the murders took place across County Derry between 1989 and 1993. 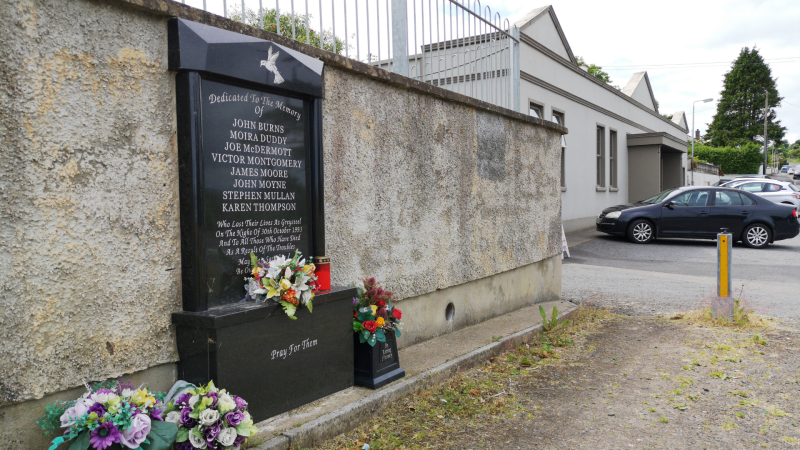 A memorial to the victims of the Greysteel massacre in 1993.

An investigation by the Police Ombudsman for Northern Ireland has concluded that there were 'collusive behaviours' in how the RUC handled a series of paramilitary attacks and murders by the UDA/UFF between 1989 and 1993.

The report focused on the murder of 19 people during the period, as well as a number of attempted murders, and raised 'significant' concerns about police conduct.

Included in the report are the killings of eight people in Greysteel on October 30 1993, and the murders of four men in Castlerock on March 25 1993.

Police Ombudsman Ms Marie Anderson's enquiries found that the concerns of the families around collusive behaviours were 'legitimate and justified'.

The report found failings leading to the arming of the North West UDA/UFF with military assault rifles, and found that police failed to warn a number of individuals of threats to their lives.

"I am of the view that police were aware of the growing threat posed by the North West UDA/UFF from 1989 onwards," said the report.

"This increased threat, however, was not initially accompanied by a policing response proportionate to the increased risk to members of the republican and nationalist communities."

A failure by police to adequately address the passing of information by UDR officers to loyalist paramilitaries was identified, and the report found there had been 'deliberate destruction' of records relating to informants suspected of being involved in serious criminality, including murder.

Ms Anderson also found police had failed to disseminate all relevant intelligence to police officers investigating a number of the attacks, and also identified failures in the use and handling of informants suspected of being involved in serious criminality, including murder.

However, the Ombudsman said there were a number of instances where RUC Special Branch had obtained information from informants that 'impacted upon the effectiveness of the UDA/UFF as a terrorist organisation and may have saved lives'.

SDLP MP for Foyle, Colum Eastwood, said the report was a 'total vindication' of the families' decade-long campaign for truth.

"The Ombudsman sets out a litany of unacceptable behaviours, including decisions not to inform people of imminent threats against their lives as well as using informants involved in the most serious criminality, which clearly contributed to the toxic environment which allowed these murders to happen," he said.

“The scale of failures is overwhelming - the destruction of documents relating to informants suspected of murder, the failure to provide relevant intelligence to those investigating the murders, the failure to decisively address police and army officers known to be passing information to loyalist murder squads as well as the incredible decision not to inform people whose names were found in the possession of loyalists that their lives were under threat.

"In my view, this amounts to a total system failure. The victims of these horrific crimes never stood a chance. Those now calling for an end to investigations into serious crimes need to read this report cover to cover.

"They need to understand the impact of those calls and the scale of corruption and criminality that was hardwired into this place through paramilitary death squads and the behaviour of state actors.

“Dealing with the legacy of our past is difficult but that is no excuse for giving up on these families and their justified fight for truth. My thoughts and the thoughts of my party are with the families today.”

The PSNI's Deputy Chief Constable, Mark Hamilton, said procedures for responding to potential threats had greatly improved since the time of these murders.

"The peace process has changed the context for policing," he said.

"The Police Service of Northern Ireland now have greatly improved policies and procedures which guide our response to potential threats and how we approach criminal investigations and the management of intelligence.

"These policies and procedures are firmly embedded in principles of the Human Rights Acts 1998.  We welcome the fact that the Ombudsman has recognised these positive developments in her report.

"These were appalling crimes carried out by those with evil intent. We are very aware of the hurt and anger felt by the families of those killed and those injured and we apologise to the families for the findings in this report.

"The Police Service of Northern Ireland remains firmly committed to bringing those responsible for these murders to justice. We appeal to the community for information that will assist our Legacy Investigation Branch detectives in their investigations," he added.

The Police Ombudsman's report is available to read in full on their website.