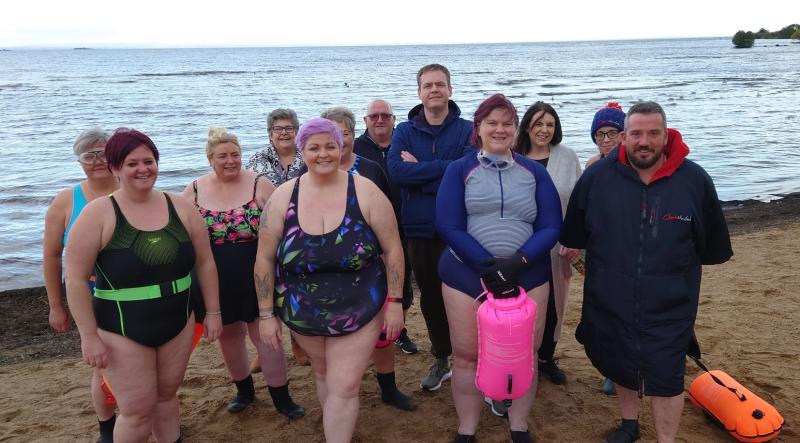 Some of the members of Ballyronan Bluetits.

While most people will still be recovering from the over-indulgence of Christmas day, a hardy group of swimmers from across Mid Ulster will be taking on an early morning swim on Boxing day.

The festive dip, which will take place at Cranfield Point in County Down, has been organised by Ballyronan Bluetits, a group of around 200 swimmers.

Formed just 14 months ago, the group will also hold dips locally – on Christmas eve they will brave the icy waters at Ballyronan Marina beach at 7.30am and again on New Year's Day at 11.00am.

For Maghera woman Mary O'Hagan, this will be the third winter she has been taken part in cold water swimming.

Having started with Arcadia Bathing Club in 2019, Mary enjoyed her first swim with Ballyronan Bluetits in October 2020 along with a handful of other new members.

Since then, the group which has members ranging in age from children right up to their seventies, has continued to grow with aound 200 regular swimmers and 1,000 members on their Facebook page.

For many, the health benefits that come along with cold water swimming is what first attracts them to it.

Mary explained: “It is fantastic for reducing inflammation in the body. Anybody that suffers from chronic pain, it's very good for that. It's also great for reducing stress and for your mental health. In fact there are so many benefits.

“A study was done on lido swimmers in England recently and they found a protein in their blood they think helps to prevent Alzheimers.”

Mary says the group is also a great way to meet new friends.

“There's a big community with it. I've made so many friends from it and the members give you so much support,” she said.

Mary says she hopes this week's festive dips will give people an opportunity to try out cold water swimming and see the benefits of it for themselves.

“We are always welcoming new members,” she said.

“People sometimes take the notion of going to do a cold water dip at Christmas even though they don't do it at any other time of the year and they go off to the coast without realising that we have somewhere close by.”

Mary urged locals to come along to one of their festive dips to try it out.

“There is no need to be an experienced swimmer. Ballyronan in particular is shallow for a good way out. I wouldn't encourage anybody of going out of their depth until they have several dips under their belt and a wee bit more confidence but anybody can do it.

“I find most people when they do try it they get the bug for it,” she added.

If you are interested in joining the group, Ballyronan Bluetits can be contacted via their Facebook page.