New report shows exports from the North to the Republic of Ireland have increased to five per cent from 1.5 per cent post-Brexit 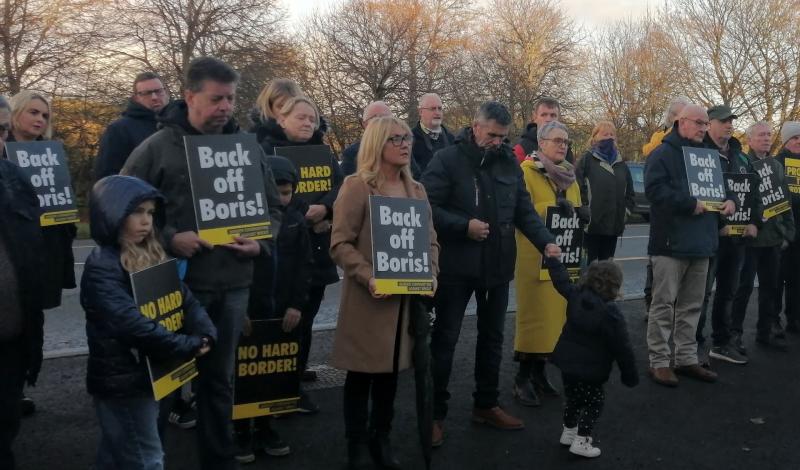 Foyle MLA Ciara Ferguson (centre): "The increase in all island trade, which has been possible due to the protocol, needs to be built upon."

Sinn Féin Foyle MLA, Ciara Ferguson, has said a strategy is needed to maximise the potential of growing all-Ireland trade.

Her comments come following a report from the Dublin-based Economic & Social Research Insititute (ESRI) that exports from the North to the Republic of Ireland have increased to five per cent from 1.5 per cent after the Brexit deal, and imports originating in the North now account for 40 per cent of imports in Ireland from the whole of the United Kingdom.

Ms Ferguson said: “This report, which has been published by the ESRI and Department of Finance in the south, has highlighted the changing trading relationships and growing all Ireland trade as a result of Brexit.

“The report shows a drop in imports from Britain to the south of Ireland and a less dramatic drop in exports from the south to Britain.

“Some of the drop in imports has been offset by increased trade from the north to the south, which has been documented by the monthly CSO trade figures over the course of the year.

“The increase in all island trade, which has been possible due to the protocol, needs to be built upon.

“There has been a complete failure by the DUP economy minister to date to recognise the new trading realities, he can no longer be blind to opportunities that exist because it doesn't fit his political ideology.

“We need a strategy to take advantage of the protections of the protocol and the north's continued access to the EU single market and to maximise growing all island trade, this can create more jobs and investment across the island.”

One of the ESRI report's authors, Martina Lawless said: “Although many supply chain challenges have come together since the onset of the Covid-19 pandemic, the greatest driver of the reduction in Irish imports from Britain can be traced to a Brexit effect.

“There has been a less substantial impact on exporters so far and continued good news coming from the deferral of customs checks on goods moving from Ireland to Great Britain which had been due to be introduced in January.”