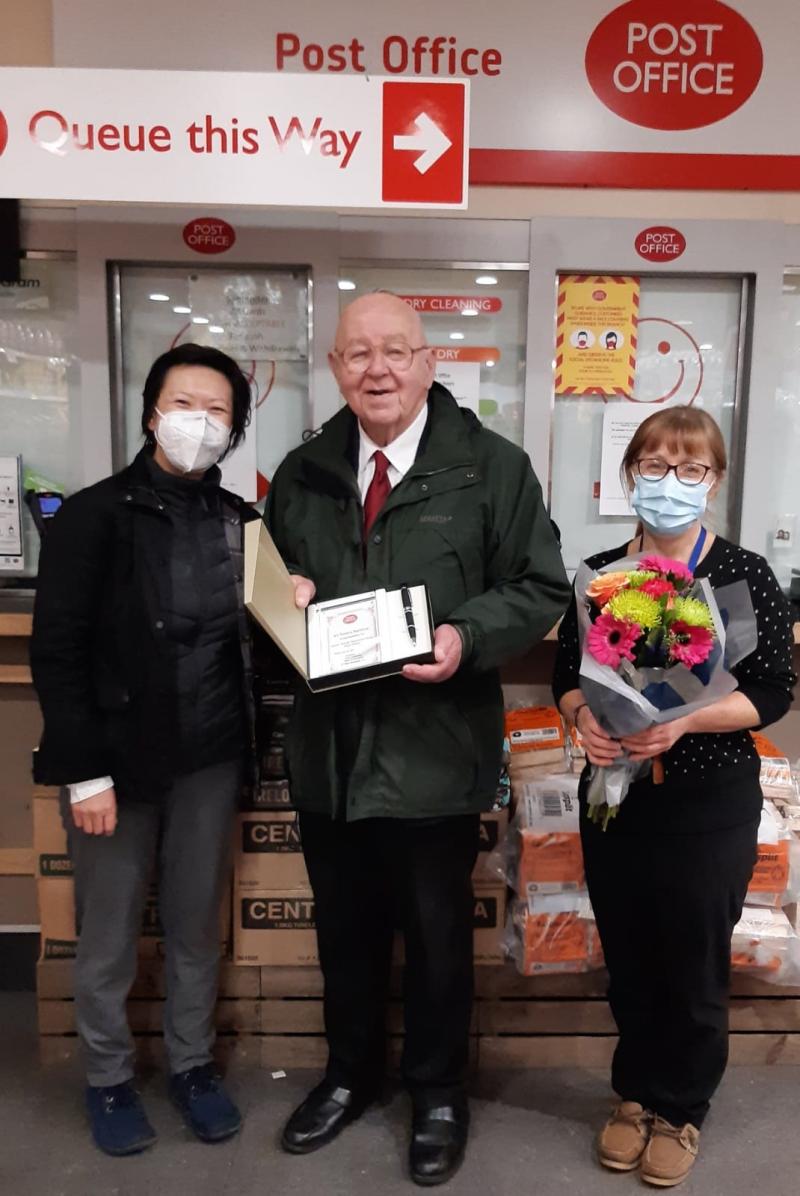 From left to right: Post Office Network Provision Lead, Janese Sung, presents a certificate and gifts to Jim Gough and his daughter Geraldine

The Postmaster for Buncrana Road Post Office, Jim Gough, has retired after 45 years of dedicated service.

Eighty-eight-year-old Jim's career as a postmaster has gone from strength to strength. Jim first took on Carlisle Road Post Office in 1976 after a friend of his announced his retirement and asked if he was interested in taking over.

After re-organising the post office and discovering how much he enjoyed the work, he then took on Park Avenue Post Office after its Postmaster also retired.

After a third local postmaster retired – this time on Buncrana Road – Jim decided to once again take on a branch because he liked it so much.

His service has spanned some of the most turbulent periods Northern Ireland has faced. Serving these communities during the height of the Troubles, Jim said he became the most robbed postmaster in the UK but he continued running his branches through a combination of “stubbornness and great staff”.

Besides supporting the community through the Troubles, Jim’s branches were also a lifeline through the Covid-19 pandemic. Although the initial impact of the pandemic saw footfall sharply fall, Jim said that with the right precautions in place his customers gradually returned.

Jim has lived in Derry his entire life and at the age of 88 has decided that it is now time “to hang up the date stamp”.

Reflecting on the evolution of Post Office, Jim remarked how it has “changed drastically over the years” with the “introduction of computers, online business, emails”. In particular, he noted that post offices increasingly now act on behalf on many banks in supporting customers to withdraw and deposit their cash.

Above all, Jim reflected on the people he has both worked alongside and served. He gave credit to those he worked with over his four decades of services, noting “I was lucky to have first class people about me. Without them I would not have remained”.

He also admitted that, at one point, he may have known as many as half the people in Derry because he ran three different branches and enjoyed talking to people from the local communities so much.

His branches in particular served and supported many elderly people and pensioners. The excellent service his work partners provided led to an increase in the number of elderly customers because “we all went beyond the call of duty to give a good service” – and this was particularly true during the pandemic.

Local Post Office Area Manager, Sean Docherty, has his own personal connection to both Jim and the post office.

Mr Docherty said: “The Branch has a history for me also as I started my career at the age of 16 in the branch over 28 years ago and its very near my family home, so it has a real special meaning to me.

“Jim and his daughter Geraldine are widely known and very well respected within the city for their tireless dedication, commitment and service to their local community all throughout the Troubles and beyond. I wish Jim all the very best and well deserved retirement and long health for the future.”

A framed long service leavers’ commemoration letter from Post Office Chief Executive Nick Read was presented by Post Office Network Provision Lead Janese Sung along to Jim with gift vouchers and a pen to thank him for his loyal service. A bouquet of flowers was also presented to his daughter Geraldine.