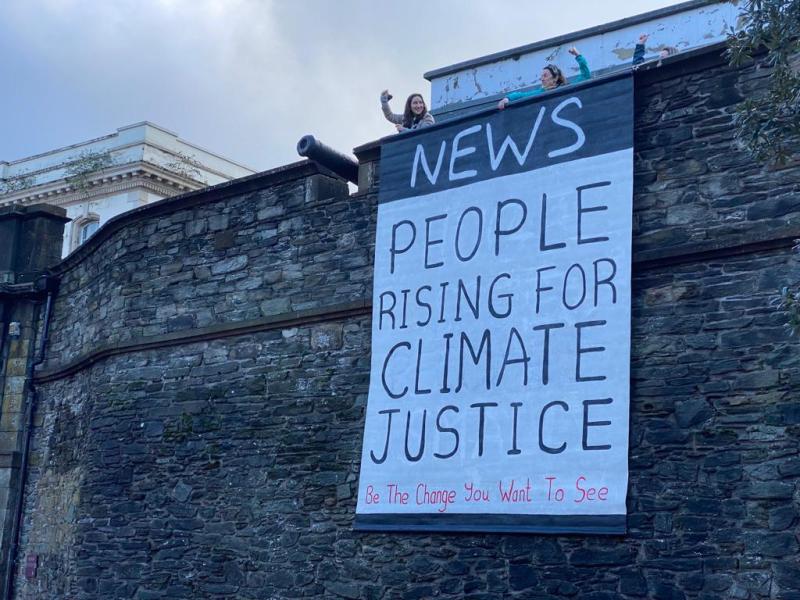 Activists from the North West Climate Coalition dropped a banner over Derry's Walls to send a message loud and clear to the COP26 conference – “People Are Rising For Climate Justice”.

Governments from across the world are currently attending the conference on climate change in Glasgow with the aim of seeing what can be done to halt global warming.

Activists from all over are making sure their political leaders are being held to account and Derry is no different with the North West Climate Coalition making their voices heard prior to Saturday's Global Day of Action march in the city.

People Before Profit Counicllor, Maeve O'Neill – who is also a member of the North West Climate Coalition – said: “Previous Climate Conferences of world leaders has gotten us no where near to taking proper action on the climate crisis.

“It is nothing more than a greenwashing opportunity for those in power.

“Real change will come from the organising and mass mobilisation of millions of people across this world.

“This is people power and its the most effective tool we have in making the transformative change we need.”

Ms O'Neill's fellow People Before Profit Councillor, Shaun Harkin, said that while the parties in the Stormont Executive have been saying all the right things about climate change, their talk has yet to be matched by positive action.

He added: “Over the past week, every local mainstream party has paraded its commitment to the environment.

“They have all sent representatives to Glasgow to give interviews in an effort to associate themselves with calls for drastic action to save the world.

"They were just as unanimous back in 2014 in voting at the Assembly for a public inquiry into how more than a million tonnes of toxic waste was dumped on Derry’s doorstep.

“But there’s been no public inquiry. The toxic waste still festers there, with nobody held responsible.

“Now that the environment is top of the news agenda, they are all out presenting their counterfeit credentials as fighters against the creation of waste and pollution of the land.

“The only thing the establishment parties are serious about recycling is empty rhetoric.”

The Global Day of Action takes place on Saturday, November 6 at 2pm in Waterloo Place, Derry.