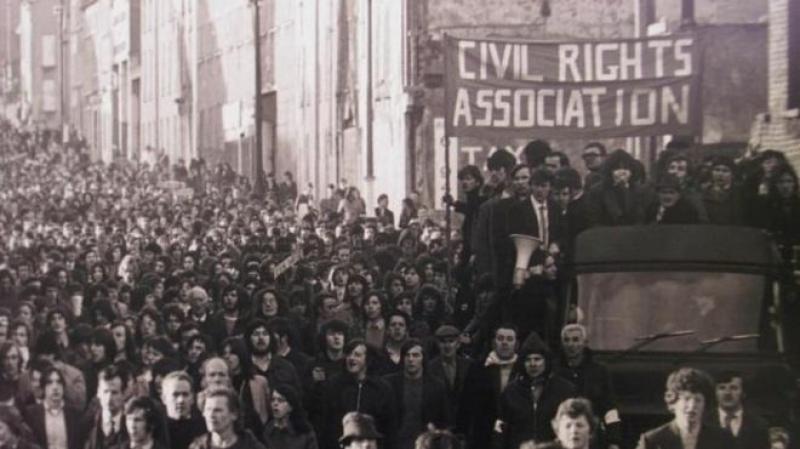 Four years of difficult, uncomfortable and rewarding conversations will be brought to a conclusion as the Bloody Sunday Trust's “Conflict Transformation & Peacebuilding Project” comes to an end.

A conference to be held at Derry's City Hotel on November 19 will invite participants and speakers from a wide spectrum of those involved in the Troubles to discuss what has been learned on the project's journey and how to move forward.

The Bloody Sunday Trust set the project in motion in 2017 to explore the concept of what is becoming widely known as the Derry Model.

The model has seen the city of Derry be cited as an example of how contentious issues such as justice, legacy and parading can be resolved where other places in the North are still struggling to progress on those matters.

Families of victims, people from Nationalist and Loyalist groups, former Republican and Loyalist combatants and even former British soldiers have all participated.

Maeve McLaughlin, the Bloody Sunday Trust's project manager, said that the project served to hear from all sides and to inform everyone of what can be achieved no matter how hard, difficult and uncomfortable conversations have been for those who took part.

She said: “The project has been delivered by the Bloody Sunday Trust since 2018. Effectively, it is looking at an increasingly popular concept known as the Derry Model.

“The project explores the reasons why in the city here we have managed to deliver on contentious and difficult issues that other places can't.

“So we look at issues like justice and legacy and, coming out of the conflict, they are the hardest and unresolved issues.

“We also look at things in the city like how come we had the public enquiry into Bloody Sunday. How was that lobbied for, how that was managed and how families were supported through that enquiry process.

“What is also looked at is the really important issue of public apology from a British Prime Minister to the citizens of Derry and what that meant for our role in terms of leadership and risk-taking in the peace process.

“Equally, how come in this wee place in which we live in, we have an accommodation and an agreement on parading when other places haven't or can't.

“What we did was we engaged with over six hundred participants who came to the city and stayed on a two-day module. They met with the people who were key to those seminal events

“For example, lets take in and around parading. They met with the Apprentice Boys, met with the Bogside Residents Group, met with the business communities and looked at what kind of formula of words were used that got us to agreement.

“With the issues of justice and legacy, they would listen to stories of families across different persuasions about what justice actually means.

“We also had a big uptake from the Protestant, Unionist and Loyalist community as well. There was a lot of engagement from East Belfast and a lot of groupings that would represent Loyalist organisations.

“One of the significant pieces of the project has been to bring together the Crumlin, Twaddell and Ardoyne groups – the Orange Order, the flute bands and the residents' group – and they came and spent two days in Derry which was of great assistance when it came to negotiating out the parading issues in 2019.

“A lot of hard talking but what people left with – and I know it's a bit cliched – was a sense of hope that you can actually achieve some of these things with leadership and a bit of risk-taking.

“The other important thing in relation to this was that we also engaged with former British soldiers. People might think that's strange for us to do given we're the Bloody Sunday Trust.

“We know all too well the significance of what the British Government did in this city. However, equally, the British soldiers who served here also have a story to tell and we facilitated that part of the process and will continue to do so.

“That part was challenging and uncomfortable. We engaged the British soldiers with former combatants and with people who had lost loved ones to British army violence.

“So it was a challenging two days but there are people who we've engaged with who are continuing to have those conversations.

“We've also engaged with the Warrington Peace Centre as well. They are doing work there around the impact of the conflict upon England as well as Ireland.”

Although the project itself will come to an end at the conference, Maeve McLaughlin insists the work of the Bloody Sunday Trust will continue and hopes to put what has been learnt from the project on an international platform.

She added: “I suppose the conference is to reflect on the last four years and acknowledge people who too part in the work. I want this to be participant-led so I want to hear from people from the Protestant, Unionist and Loyalist communities, former British soldiers and former Republican and Loyalist groupings.

“It will be the end of four years work but it will not be the end of the work for the Bloody Sunday Trust – that's really important.

“Regardless of how we take this forward, our view and our plan is that we now put this on an international platform.

“One of the ironic pieces out of all of this is that we in Derry looked internationally towards the origins of civil rights. Derry was very informed as to what was happening in the United States.

“And now internationally, people are looking in at us and saying 'how did you actually do that?'.

“It's a model of practices, lessons and learning but in our view, this is a piece of work that will continue.”