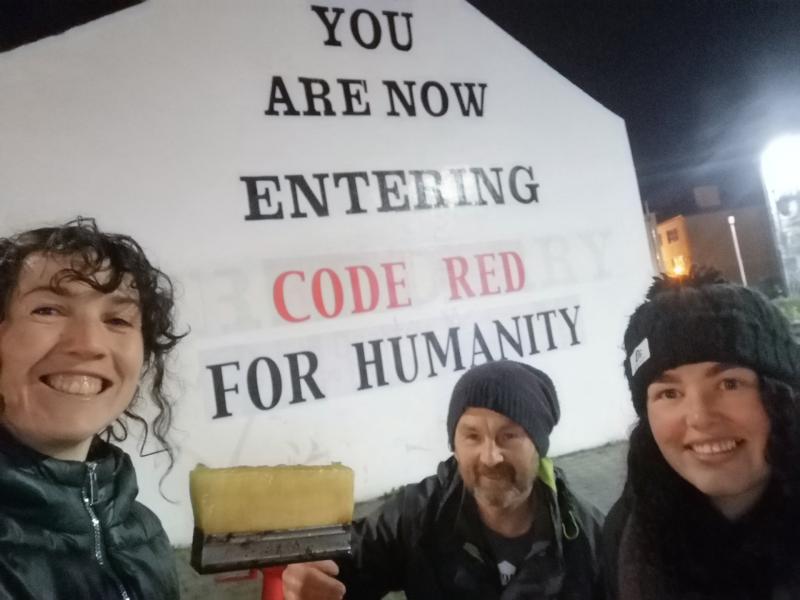 Cllr Maeve O'Neill of People Before Profit, left, with two other activists in front of the temporary amendment to the wall at Free Derry Corner highlighting awareness of the effects of climate change

Free Derry Corner was temporarily adapted last night to raise awareness of the urgency of the Climate Crisis as world leaders meet at COP26 in Glasgow as they decide their actions to address the climate crisis.

The adaptation which now reads, “You are now entering code red for humanity”, was created by activists from Zero Waste North West as part of the North West Climate Coalition's actions in the build up to the Global Day of Action rally and march on Saturday, November 6 at 2pm in Waterloo Place.

Jim Keys from Zero Waste North West said: “We wanted to use the wall to speak the reality behind the hype of COP 26, that our global leaders are still more focused on propping up a capitalist system that is destroying the planet than responding to the climate emergency we are in.

“As the cradle of the civil rights movement, our struggle found strength in the global solidarity it won. The climate justice movement is a global one, not just with people but with the ecosystems which are integral to supporting life on earth.”

There are rallies and marches happening all across the world on Saturday, November 6. Locally climate activists are calling on people to gather in Waterloo Place at 2pm to join the global call for urgent, radical climate action.

A spokesperson from the local climate coalition said: “Only through the pressure of people taking to the street, campaigning and mobilising for climate action, will there be the type of change needed to address the climate crisis.

“Governments have done too little too late, colluding with corporations allowing them to pollute and plunder the planet for profit no matter what the consequences are for communities and nature.”