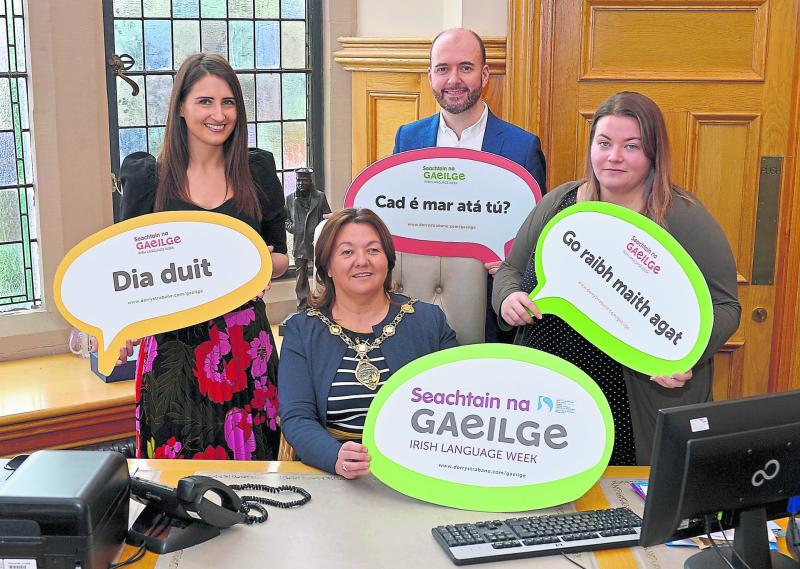 Cllr Gary Donnelly's motion at last night's meeting of Derry City & Strabane District Council to promote the availability of the Irish Language as a subject for A-level pupils was passed, but not without an interruption from the SDLP.

The Independent councillor tabled his motion to highlight the limited options open for school pupils to take their study of Irish on to A-level.

As an Irish Language Act edges closer to being implemented across the north of Ireland, Cllr Donnelly cited the potential career pathways that could be opened up for A-level students once this comes into place.

His motion read: “This Council acknowledges the proud history of Irish language learning in Derry and Strabane, particularly the rich learning experience afforded to generations of post-primary pupils, instilling a love for Irish language and culture in many of our citizens, and widening career opportunities.

“This Council recognises the continuous growth in demand for Irish-medium education in this Council area and beyond as reflected in the thriving communities in our local Irish-medium pre-schools and primary schools.

“Council welcomes the creation of new jobs, career opportunities and pathways in and around the Irish language, particularly in the context of forthcoming legislation.

“Council notes with concern that local Year 13 pupils have been denied access to A-Level Irish. Council recognises the detrimental impact this may have on those affected in terms of their education and general wellbeing, pathways to third-level education and career choices.

“Council calls for Department of Education to engage with local schools, the Foyle Learning Community and others to explore solutions to ensure that students in local mainstream post-primary schools will not face barriers to learning and gaining qualifications in Irish. Council welcomes platforms for public discussion around the proper promotion of Irish in schools.

However, Cllr Lilian Seenoi-Barr (SDLP), while supporting the motion, wanted to broaden its outlook and tabled an amendment to it.

Mrs Seenoi-Barr's amendment included the following: “Council calls for the continued support and development of Irish language and Irish medium learning at primary school level such as that currently in place at Cultúrlann Uí Channain.

“Council calls for the development of an awareness campaign within careers departments in post-primary schools to highlight the ever-growing jobs-market in Irish.

“Council calls for increased funding for students to attend Summer Colleges in the Donegal Gaeltacht, in particular for students from disadvantaged areas.”

However, this amendment came on top of other amendments put in by SDLP councillors to motions put forward by Cllr Emma McGinley (Mental Health) and Cllr Shaun Harkin (Festive holiday for retail workers) respectively.

Both motions were passed but not without some irritation to the original proposers. Cllr Donnelly felt the same was happening to his submission.

He said: “There seems to be a pattern developing here tonight for the SDLP. For me, this amendment has too many 'asks'.

“My motion was specifically about post-primary Irish provision. I'm not taking away from the issues that's there (on the amendment), but where mine was specific, this opens it up all over the place.

“I'm not saying that they're not valid points but it does take away from the specific target that I was aiming at.”

Unlike the other two motions that the SDLP tabled amendments to, this one did not pass with only 10 councillors voting for it with 23 against.

The original motion was put back onto the floor with Cllr Patricia Logue (Sinn Féin) backing up Cllr Donnelly in saying A-level would open up new career doors upon the arrival of an Irish Language Act.

She said: “The Irish language has gone from strength to strength in this city and beyond. My own children were part of the city's first Irish school and four of my grandchildren are Irish school pupils.

“I know at first hand how children benefit in many ways culturally and linguistically. It is right and proper with the imminent installation of an Irish Language Act that schools and businesses recognise how important it will be to have resources that fully ensure opportunities and benefits that will arise are met.

“It is imperative that partnerships such as the Foyle Learning Community have plans in place to equip local pupils and the public with skills they need to be able to avail themselves of these opportunities.

“Every effort should be made to ensure that every pupil that wants to do A-level Irish should be able to do it.”

However, opposition came from Ald Derek Hussey (UUP) who said that not only does the desire to take Irish at A-level diminish, but pushing it as an academic subject at that grade raised concerns of 'social engineering'.

He said: “I think back to the formation of the Republic of Ireland or the Irish Free State or whatever you want to call it, and the enforcement of the Irish language within the civil service. It was almost 'jobs for the boys'.

“There's been no denial of the Irish language being taught. The problem arises when you come to A-level. There, the desire from students to move on to A-level Irish seems to diminish.

“Students are beginning to consider their career choices. You're in a situation at A-level where you're down to three or four subjects and therein lies the issue.

“This issue existed in Omagh a couple of years ago where similarly, there were not the number of pupils applying for or seeking to do Irish as one of their A-levels.

“I'm concerned that we're almost looking at social engineering in a way, rather than looking at the practical solution if there is a genuine desire to follow an A-level course.

Despite the unionist bloc voting as a whole against the motion, the Council passed it as other councillors voted for it in a 24 to seven result.