Cllr Doyle and Cllr Duffy trade social media blows as motion to involve National University of Ireland to assist Ulster University in delivering 10,000 students to Derry is voted down 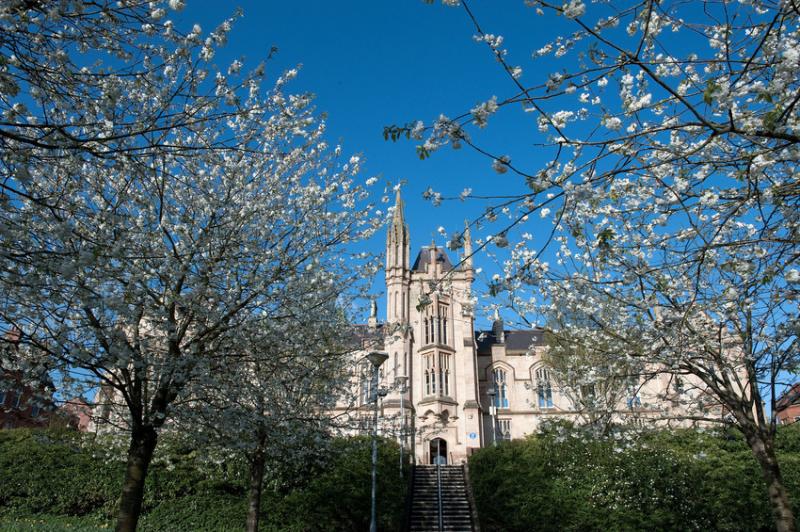 A Council debate on the expansion of Ulster University's Magee campus was voted down. However, the debate continued on Twitter with a furious exchange between Cllr Emmet Doyle and Cllr Sandra Duffy

Cllr Emmet Doyle (Aontú) posted on his Twitter account his frustration that other parties voted down a motion put forward by Cllr Paul Gallagher (Independent) earlier in the evening.

The session, held virtually online due to current Covid measures, had councillors debating and voting via an internet link.

Cllr Gallagher's motion was in response to the Vice-Chancellor of Ulster University, Paul Bartholomew saying that the 10,000 students to Magee College by 2030 target – as set out by the New Decade New Approach deal of 2020 that restored the Stormont Government – was not attainable and that 6000 was the more likely figure.

His motion called to bring in the assistance of the Galway-based National University of Ireland (NUI) to help Ulster University reach the figure of 10,000 Magee students.

Cllr Gallagher's motion read: “We must immediately begin a dialogue with the National University of Ireland, as this island's biggest Higher Education provider to ensure the guarantee to have 10,000 university students in the north west by 2030, as agreed in the New Decade New Approach, is finally realised.”

The motion was defeated with only eight councillors voting for it, 24 against and two abstaining.

Hours later, Cllr Doyle tweeted: “The SDLP, DUP, UUP and SF all voted against having a conversation with NUI about Magee’s future at Council tonight. What exactly is their policy?” 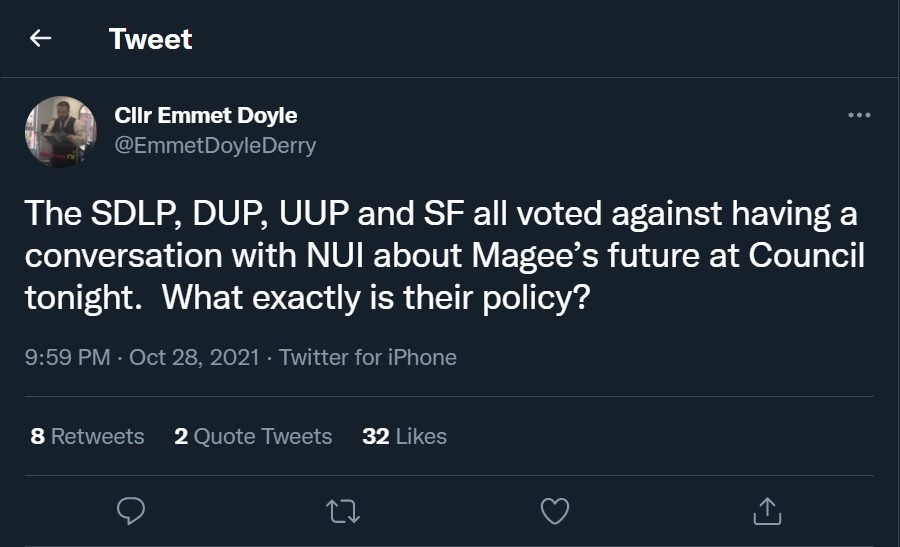 Council was still in session at the time Cllr Doyle posted this and he had missed a handful of votes on other motions.

This prompted Cllr Sandra Duffy (Sinn Féin) to tweet back: “Council meeting still on, you’re missing votes, do you not care about legacy, emergency services or workers rights?”

Cllr Doyle replied: “Bit of a dodgy deflection there Sandra given (Cllr) Conor (Heaney) just replied to a few tweets.”

Cllr Duffy retorted: “He still managed to vote on the debates, do you have an opinion now on student renters? We are now discussing that.”

In reply, Cllr Doyle said: “And we’re discussing your votes on Magee. Never you worry about what I’m doing, I had something on and I can still type.“

And the exchange closed with the following dialogue.

Cllr Duffy: “But you can’t vote, missed three so far.” 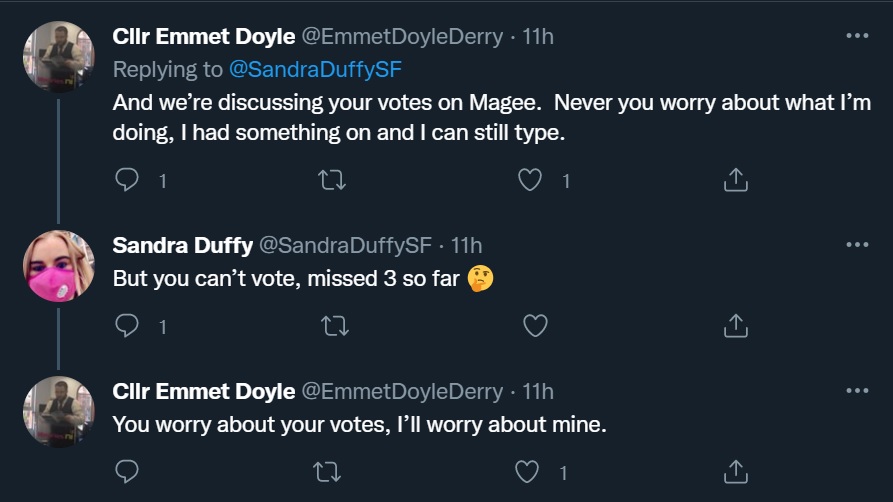 Sinn Féin's Cllr Conor Heaney had indeed tweeted back to Cllr Doyle on the University motion from earlier but he had been present and voted on other motions that were discussed by Council.

In a Twitter reply on the University motion to Cllr Doyle, Cllr Heaney said: “You seem to have misunderstood me, I have issue with engaging with NUI but they have no remit to deliver 10,000 students in Derry. My point was I do not trust the DUP and FF (Fianna Fáil)/FG (Fine Gael) to deliver, I am saying give us the mandate in both parts of Ireland and we can deliver.”

Earlier, in the debate on the motion itself, Cllr Heaney outlined why Sinn Féin couldn't support Cllr Gallagher's proposal.

He said: “Our position is that we want to see 10,000 students delivered at Magee (College) and it is achievable if the Ulster University and governments north and south collaborate to develop a new model of funding.

“There's an Assembly election next year. If our party is given a mandate and is the biggest party in the Assembly, that gives us first pick of the departments and I'm confident, that in that scenario, we would choose the Department of Economy that the DUP has jealously guarded since 2007.

“However, our party can't support this proposal. To abandon the Magee project and all that has been done to date and head off for a pipedream with an organisation (NUI) that is unable to legally deliver the target that this city needs.

“We would never have secured a medical school (for Magee) had we given up at the first hurdle and the same medical school is now over-subscribed. This reflects the potential for further growth.

Cllr Shaun Harkin (People Before Profit) argued in response that the failure to deliver on the figure of 10,000 was yet another example of both Stormont and Ulster University letting down Derry and the north west.

He said: “The Vice-Chancellor said we would not be able to achieve 10,000 students and I think this is alarming.

“We're hearing from Sinn Féin, 'elect us in the next election and we'll sort it out' and the SDLP say 'we shouldn't be too worried by this and we should work with people'.

“But here's the issue. Between Stormont and Ulster University over the last sixty years, both have ensured that expansion has not happened for Derry and the north west.

“And here we are again now with a commitment written into a government document which was used to bring Stormont back that says 10,000 students for Magee. Yet the Vice-Chancellor says, 'that is not happening'.

“So who is directing who? Who is in charge? Is it the Stormont Executive or is it Ulster University bosses making decisions by themselves? Are those bosses ignoring the Executive as well as the will of the people in the north west?

“My fear is that in ten years time we will still be talking about why we don't have a rejuvenated and restructured university that our city deserves.”

However, Ald Hilary McClintock (DUP) admitted she thought 10,000 to be an unrealistic target and thanked the university's Vice-Chancellor for being candid with his revised figure of 6000.

She said: “We are committed to seeing the expansion of the university. To be honest, I don't think (the figure) was ever going to be 10,000.

“It's good that Paul Bartholomew has come out straight and told us this because it gives us a way to move on now.

“I don't think the proposal before us is the way to go. That proposal says to me, 'throw the baby out with the bath water'. We have to be looking at problem-solving rather than just jumping ship and trying to do something else.

“This is a multi-faceted problem. We can't just solve it by rushing off to the National University of Ireland and invite them in. We have to look at all the issues involved but unfortunately, we will not be supporting this motion.”

With the motion having been defeated, Cllr Doyle said: “The establishment parties have now found themselves in a position where the public have no idea where they stand on Magee’s future. In the last few weeks the Pro-Vice Chancellor of Ulster University clearly said 6000 students was the most we could hope for in Magee, well short of the 10,000 we require.

“In order to not only put pressure on Ulster University but also to seek alternatives, a motion was put forward at Council last night to just have discussions with the National University of Ireland about Magee’s future and all the establishment parties opposed it.

“So now we are in a position where Ulster University have said they can’t deliver 10,000 students, the Economy Minister refuses to come to talk to us and we now can’t speak to other Higher Education providers.

“Sinn Féin councillors also had the nerve to say that should they become the largest party in the Assembly they will deliver for Magee. This is the same party that put posters outside Magee years ago claiming they had ‘delivered’, now the question must be asked - if they were waiting to become the largest party, which is far from resolved, have they sat back and watched this essential part of Derry's economy linger?

“People deserve to know all those parties’ stance on Magee. Aontú has been up front. We want to see an independent university but we’ll explore every option for delivery for Derry.”