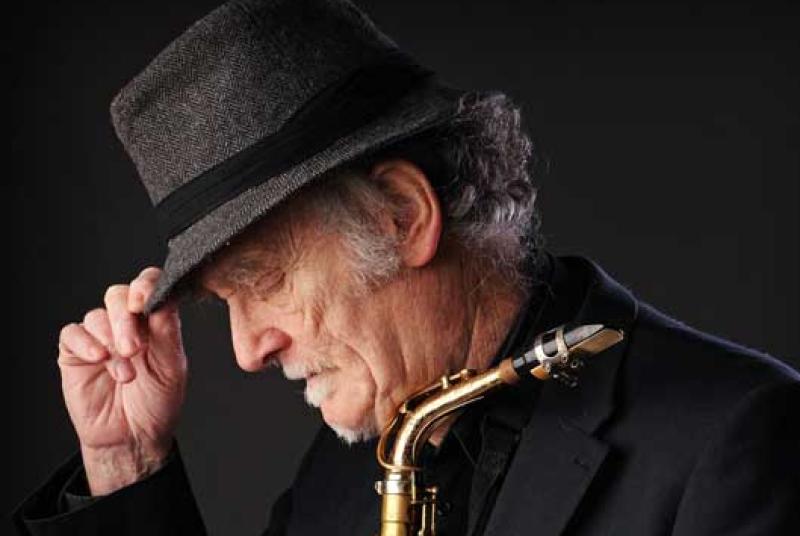 The alto-sax and clarinet player was a huge favourite with jazz fans across the world in a career that spanned 70 years.

Nat King Cole, Acker Bilk and Louis Stewart were some of the big names of jazz that Gay rubbed shoulders with and his music and style of playing won him many fans within the jazz scene.

Mayor Warke, who two weeks ago met with Gay to announce that next year's City of Derry Big Band & Jazz festival would be a recognition of his contribution to music, said that Gay's music was a gift to the people of Derry and an inspiration to a younger generation of musicians.

He said: “Gay was an immense talent who played with some of the greatest names in jazz including Nat King Cole and Acker Bilk.

“He loved to share his stories and his talent, and I think it was that sheer passion for the music itself, not the fame associated with it, which made him such a likeable and relatable person.

“He was a legend in his own right, and we are so lucky to have such a long association with him through the City of Derry Jazz Festival over the decades.

“He shared his talents all over the world, but he loved his home here in Derry and sharing his music with local people.

"At a time when jazz wasn't widely accessible Gay brought the music to new audiences and he will no doubt continue to inspire new generations.

“I am delighted that plans are already in place to honour Gay at next year's festival, which he has been an integral part of for so many years.

“I had the real pleasure of meeting Gay at his home with his family recently, and I want to extend my deepest condolences today to all who knew and loved him. His memory will live on in the music – it was his gift to the people of Derry."

The SDLP MP for Foyle, Colum Eastwood also paid tribute to Gay saying: “I’m deeply saddened to hear of the passing of Gay McIntyre and know that sentiment will be shared across Derry and on both sides of the border.

“His musical talents were synonymous with our city and the thousands of performances he gave over the years will live long in the memory of local people.

“Gay was also a fantastic ambassador for this area, he toured the world and played with some of the biggest names in Jazz music, but never forgot his roots or his home in Derry.

“Our city’s Jazz Festival, at which Gay was a regular performer, will continue on as a testament to his memory and the musical influence he had on Derry.”

Sinn Féin MLA for Foyle, Ciara Ferguson added: “I was saddened to hear of the death of local musician, Gay McIntyre.

“It's quite staggering to know that his music career spanned over seven decades, working with many of the greats in the jazz scene.

“He last left a lasting legacy in Derry and will rightly be remembered as one of Ireland’s greatest jazz musicians.

“Our thoughts and sympathies are with his family, friends and loved ones at this sad time.”

DUP MLA for Foyle, Gary Middleton expressed his condolences saying: “The passing of Gay McIntyre is a very sad day for our music scene. He was known right across the community and was an inspiration to many. He entertained countless people over many decades and he will be long remembered by many people.”

There were tributes on social media as well. Gay's fellow Derry music legend, Phil Coulter tweeted: “So sad to hear of the passing of the great Gay McIntyre.

“He was a virtuoso musician, a jazz icon and my friend for 60 years. May his gentle soul rest in peace.” 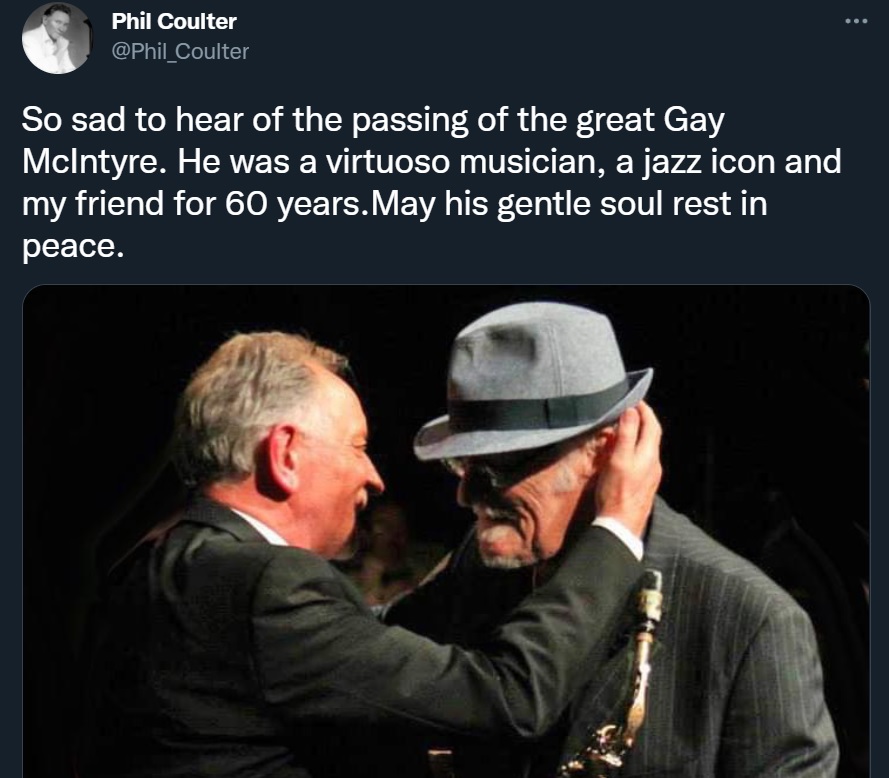 Derry-born leader of the Sinn Fein group in Lisburn & Castlereagh City Council, Ryan Carlin posted on Twitter: “Sad to hear of the death of Gay McIntyre. He was a good friend of my grandfather, Patsy McShane, also a musician.

“When my granda died, Gay played amazing grace at his funeral & my mother passed his old Clarinet on to Gay. I like to think he played it every once in a while.”

The management of the Hidden City Cafe in Derry also paid tribute on Twitter to Gay who had played at the venue.

They tweeted: “RIP to the legend that is Gay McIntyre Sympathies his wife, Paul, all his family, friends & Jazz community. We will cherish forever the time he played with Paul & guests in the cafe. Thank you sir, sleep in peace.”

Gay McIntyre was born in Ballbofey in Co. Donegal on April 24, 1933. His family moved to Derry not long after.

His love of jazz stemmed from when, as a child, he heard a record from American clarinetist, Artie Shaw, that his father had brought home.

In an interview in 2014 with Culture Northern Ireland, Gay said: “When I heard that record I got very emotional. It was the improvisation. By the time I started to get a bit of technique and started to be able to play tunes, I was improvising immediately.”

In the same interview, he recalled how, when he was 18, he and his band not only supported the legendary Nat King Cole at Belfast's Grand Opera House, but, at the interval of that show, he also turned down the trip of a lifetime.

Gay said: “At the interval two guys came and said to me, 'Mr Cole would like to see you'. And as soon as I walked into his dressing room he said, 'What age are you?' and I said, '18'.

“He says, 'Perfect. I want to take you to America. You’ve got a beautiful tone and it would be a sensation to have an Irishman in my group'.

“But six weeks earlier I had planned to go on holiday with two friends. We only got sent two tickets from the airline so I said, 'Well, we’ll toss up and the odd man out stays'. I was the odd man out – and the other two boys were killed when the plane hit the Isle Of Wight.

Gay was a mainstay on television with regular appearances on both UTV and RTE as well as a performer playing at jazz festivals at Derry and Cork across Europe.

Gay McIntyre and Johnny Quigley team up in a performance on RTE's "The Late, Late Show" in March 1985

Bizarrely, his first album only came out when he was in his late 70s with 2011's, “The Music Within Me”, which featured Linley Hamilton on trumpet.

Gay continued to play festivals and a regular slot at Bennigan's Jazz Club in Derry.

Over the years he had a long affiliation with the City of Derry Jazz Festival, always making time to play to his beloved Derry audiences.

During the 2022 Jazz Festival, the outdoor stage in Guildhall Square will be named the Gay McIntyre Stage and the opening event of the 2022 festival on Thursday, April 28, 2022, will be known as the Gay McIntyre and Local Legends of Jazz.

His funeral will be held at 11am on Friday October 29 at St. Eugene's Cathedral, Derry.