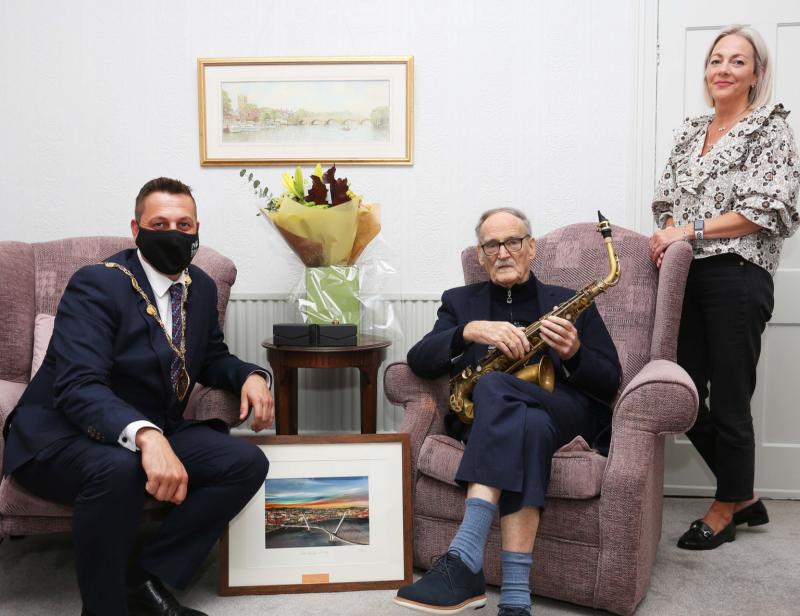 The City of Derry Jazz & Big Band Festival have announced a number of new initiatives to recognise and honour the world wide musical contribution of legendary local Jazz musician Gay McIntyre during next year's event.

Derry City & Strabane District Council's Business and Culture Committee approved the plans at this week's monthly meeting where they received an update on the success of this year's festival and the plans for 2022.

After meeting with Gay and his family, the City of Derry Jazz and Big Band Festival have announced plans to name the outdoor stage in Guildhall Square the Gay McIntyre Stage and the opening event of the 2022 festival on Thursday, April 28th will be known as the Gay McIntyre and Local Legends of Jazz.

The Mayor of Derry City & Strabane District Council, Alderman Graham Warke, visited Mr McIntyre at his home to confirm the announcement where he welcomed the new initiative.

Mayor Warke said: “Gay McIntyre is a jazz music phenomenon and has enjoyed a world renowned career performing as a saxophonist and clarinettist for more than seventy-five years," he said.

“His career is all the more extraordinary given that he grew up in the city at a time when jazz music was an exception.

“He was at the centre of the growth of the local jazz scene which has reached new levels over the last two decades through the festival which he was instrumental in establishing, so it is right and fitting that we honour and celebrate his contribution to the genre.

“He is a name that is known all over the world but his home town is where his heart is so the recognition means a lot to him and I hope it will inspire the next generation of musicians from the city to follow in his footsteps for years to come.”

At the meeting Elected members approved a rates allocation of £120,000 for the 2022 event which will be headlined by Imelda May in the Millennium Forum and Council Officers have been approved to move forward with planning.

Proposed initiatives include a Schools Education Programme and the return of the Jazz Hubs in The Playhouse / Bennigans Bar and the Great Hall at Magee University.

Outdoor music stages will be situated in Guildhall Square and the Craft Village and local legends will open the event with an evening in the Guildhall.

Jazz Master Classes and Dance Classes will be hosted in various locations during the festival and the music trail will include 75 venues.