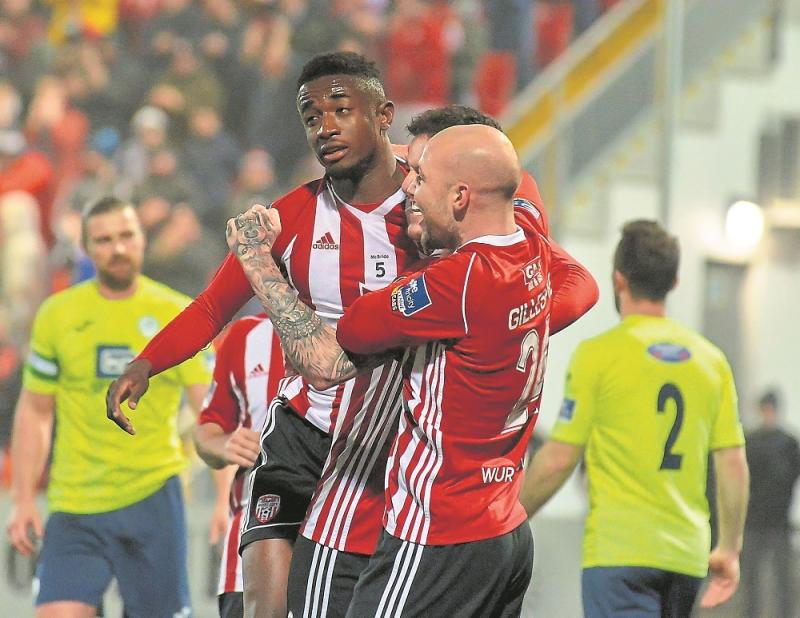 Foyle MP Colum Eastwood has demanded that “social media companies should establish tighter security” to prevent a repeat of the racist abuse dished out to Derry City striker, Junior Ogedi-Uzokwe.

The SDLP leader was speaking following Derry City's 3-3 draw at Bohemians last night where Ogedi-Uzokwe was on target for the Candystripes.

However, the forward checked his Instagram account to find comments racially abusing him – all coming not long after Derry looked to have won the game in the 90th minute prior to Bohemians' late equaliser deep into injury-time.

Mr Eastwood insisted that such behaviour was “disgusting” and that the player deserves “solidarity”.

He said: “The racism directed at Junior online during Derry City’s game with Bohemians was disgusting. There can be no place for these kind of actions in our society.

“I’d like to send my solidarity directly to Junior and he can be assured the SDLP stands fully behind him.

“Sadly this type of incident seems to be happening all too often, footballers, sportspeople, entertainers, politicians and other public figures are regularly being targeted on social media.

“Nobody, whatever their profile, should be subjected to abuse of this nature while going about their lives.

“I was heartened by the response to this abuse, for every idiot who does something like this there are 50 people ready to shout them down and put an arm around the person who has been targeted.

“Despite this, it’s long past time social media companies took serious action on this issue and denied faceless trolls and bigots the opportunity to make these kind of hurtful and dangerous comments.

“We need to see proactive action to protect people online. Social media companies should establish tighter security to ensure that comments like this cannot be routinely posted online and go unpunished.

“I would also call for a full police investigation into these comments to ensure that we send a clear message that racism will not be tolerated in any form in our society.”

He added: “I would like to send solidarity to Derry City footballer, Junior Ogedi-Uzokwe after receiving vile racist abuse on social media.

“There is no place for racism in our society. Any information on the accounts responsible should be reported to the Police, but the social media platforms should also take action to ensure people are protected from abuse.”

“Whoever is behind these disgusting comments needs to wise-up. There should be no tolerance for racism in football or in society at any level.

“We send our full solidarity to Junior and are confident the overwhelming majority of people across Ireland will do the same.

“Let's give racism the red card.”

Alliance Party representative for the Faughan ward, Cllr Rachael Ferguson, added: “There is no place for racism in our society – I utterly condemn the absolutely disgusting abuse directed at Junior, and I send him my support.

“Football is a welcoming place, and should be to all and while this is only from a minority of people, it is not representative of the friendly atmosphere we wish to say.

“If anyone has any information on this incident, I urge them to contact police with it immediately.”

Facebook, who own the Instagram platform, said they have taken action against the person who sent the racist posts to Ogedi-Uzokwe.

A Facebook spokesperson said: “No one should have to experience racist abuse anywhere and sending it on Instagram is against our rules.

"We’ve removed racist comments directed towards Junior Ogedi-Uzokwe and disabled the account that sent them.

"We’re committed to holding those who abuse others accountable, and have built tools to help prevent people from seeing this abuse in the first place, which we encourage everyone to use.”