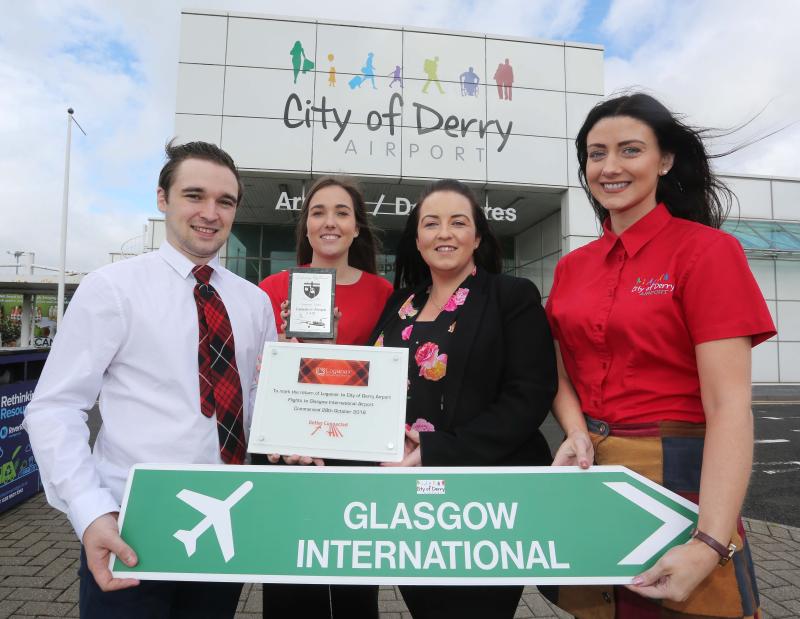 City of Derry Airport has said it is proud to welcome Scottish Airline Loganair back to the North West and delighted they will be operating a high frequency, all-inclusive service to Glasgow International commencing on 28th October, 2018. Loganair operated their very first commercial flight from City of Derry Airport on 2nd April 1979 and played a key role in the airport’s early years. To celebrate the airlines, return almost 40 years later, Loganair and City of Derry Airport are offering customers the chance to win a stylish city break in Glasgow – including return Loganair flights, free car-parking at City of Derry Airport, complimentary fast-track through security screening and complimentary access to the airports newly refurbished business lounge, a stay at the brand new Moxy Hotel and a spa package to the luxurious Blythswood Hotel Spa in Glasgow. During a recent visit to the airport, Loganair presented a new plaque to the airport to mark the occasion, similar to that of 1979. Airport Manager for City of Derry Airport, Charlene Shongo, stated: “It is an absolute pleasure to welcome Loganair back to City of Derry Airport. The Scottish regional airline played a hugely significant role in the airports history and it is fantastic news for the airport and the region that they will once again be flying to and from our airport, providing customers from within our local catchment area with direct air access to Glasgow. Loganair will operate five weekly services to Glasgow International from City of Derry Airport in winter, increasing to eight weekly services in summer 2019 to accommodate the high demand. Charlene continued: “Whether our customers are travelling for business or leisure; Loganair offer a fantastic all-inclusive flight package, which includes as standard complimentary 20kg hold luggage, complimentary refreshments on board when you fly, and seat allocation 96 hours before departure with frequent flyer rewards included at no extra cost. Families travelling to Scotland with Loganair can also enjoy additional benefits, as infants will fly at nil fare and children aged 2-11years old inclusive, will receive a 33% discount off their net fare, when travelling with an accompany adult”. Glasgow has so much to offer - Visit the iconic Cathedral, take a tour of football museum, walk around beautiful Botanic Gardens, book a day trip to Loch Ness or check out events such as Kilmarnock’s Dirty Weekender music festival and Millport Country Music Festival. Commercial Director at Loganair, Kay Ryan said: “Loganair is absolutely delighted to be back in Derry, over 39 years ago from when we first started. Derry and Glasgow have a long history and we know customers from both will be relieved that Loganair is ensuring a continuation of this very popular service’. RCA Contracts Director, Clive Coleman stated this is great news for the airport and the entire North West region. Loganair, was a key partner in the airports early years and we are pleased to announce their return. A NEW airline offering direct access to Glasgow International at competitive prices, ensuring essential air connectivity is maintained which will boost the local economy and act as a catalyst for inbound tourism to the region. Charlene concluded: “City of Derry Airport offers both convenience and excellent customer service. We encourage all travellers to think about flight options from their local airport whenever they can. City of Derry Airport provides a convenient, friendly and reliable service; offering a fast and efficient journey through check-in and security screening. We have fantastic facilities on our doorstep and it is essential everyone takes advantage of their local airport for their travel plans when possible”. Last month saw Ryanair launch a NEW route to Edinburgh, which will also commence on 28th October and operate five services per week. Ryanair also continue to operate a hugely popular service to Liverpool. Flybmi operate a double daily service to London Stansted. Tui operate a fantastic summer sun program, summer 2019 is on sale now. Super Break are offering a charter service to Iceland in January 2019. Visit the City of Derry Airport Facebook page to enter their competition for the chance to win this fantastic city break package. Pictured above: City of Derry Airport celebrates the return of Loganair - Charlene Shongo and Maressa McGilligan of City of Derry Airport with Sam Talbot and Hannah Campbell of Loganair.
ADVERTISEMENT - CONTINUE READING BELOW