Concerns over closure of café at Central Library in Derry 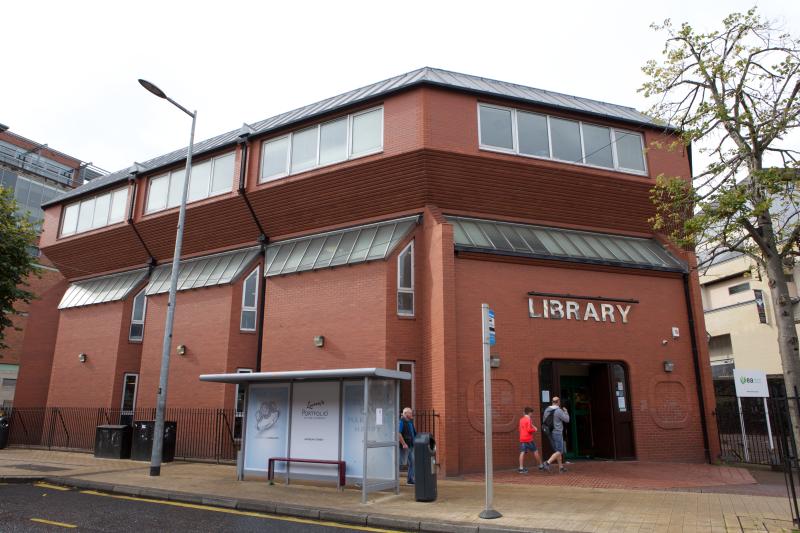 A decision to close the café in Derry’s Central Library due to its inability to meet income requirements has been criticised by service users and local activists. The Education Authority has confirmed that the decision was made ‘as income generated by this service did not meet costs’. This has sparked concerns locally of what has been described as a ‘dangerous precedent’ being set whereby public services can be disposed of if they are not generating enough money. Speaking to Derry News at the at the weekend, Maureen O’Doherty said she uses the library in Foyle Street at least twice a week and would be sad to see the library café close as it’s a facility used by people who ‘live on their own and young families.’ “I take books out regularly because I love reading, but I also think the community spirit is really good at the library,” she said. “There is a broad spectrum of ages from school children to pensioners. “I would use the café and see it’s busy. “It’s a good facility, it really is, and if you live on your own it’s lovely that you see people chatting away to someone that’s maybe the only person they see all day. “I’d be very disappointed to see the café go, it’s a good addition to the library.” Another library user, Maria Smith, said she thinks the catering facility will be a ‘big loss to young students’ who may not have access to a computer at home or simply need a quiet place to study and access to books. Member of People Before Profit, Shaun Harkin, said it sets a ‘dangerous precedent’ for other public services and how performance is measured. Mr Harkin said: "People Before Profit has spearheaded campaigns to stop the reduction of services at the Central Library and libraries across the North. “We are very disappointed to hear the Central Library cafe is slated for closure. This represents the loss of a community service and a potential loss of employment. These kinds of cuts set a very dangerous precedent.” He added: “Cuts to public services hurt communities, especially the most vulnerable who depend on them more than most. Why is it that finances can constantly be found for projects supporting big business such as RHI - but those serving the well-being of all in society are not deemed enough of a priority? “We will campaign to oppose this cut and call on everyone in favour of maintaining and extending library services to do the same. The library and all the services it offers are not a business. We should reject the application of this logic to all our public services.” “There are clearly people making decisions who are determined to vandalise public services in favour of privatisation. It's not good enough and we shouldn't accept it." ‘Service withdrawal’ A spokesperson for the Education Authority explained its decision to get rid of the service and said the one member of staff would be ‘redeployed’ to an ‘alternative location’. She commented: “EA traditionally provided a catering service within Foyle Street Library in agreement with Libraries NI. “The Authority’s Catering Service met with representatives from Libraries NI on a regular basis to review this provision. “More recently, as income generated by this service did not meet costs, the Authority advised Libraries NI of the need to withdraw the service. “EA employs one member of staff to provide this service who will be offered redeployment to an alternative school meals location.” “We will provide support and advice on any alternative catering provision.”
ADVERTISEMENT - CONTINUE READING BELOW