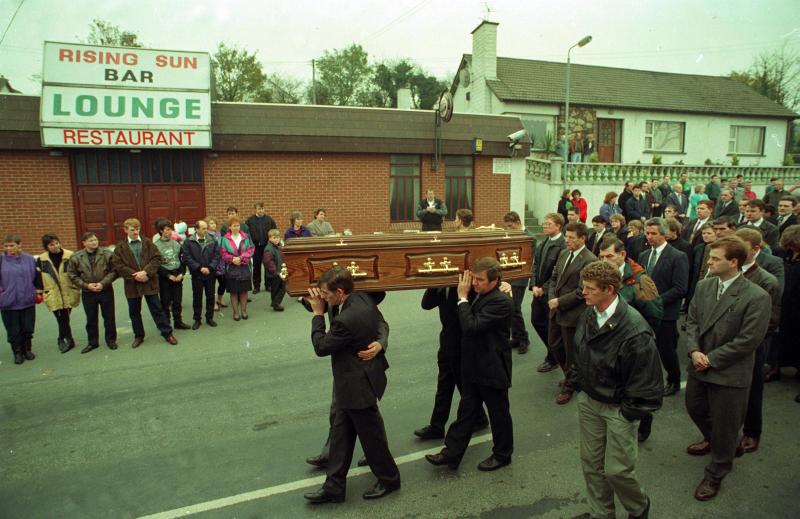 Twenty-five years ago today one of the most heinous atrocities of the Troubles took place in Co Derry.

It was Saturday, October 30, 1993 and at the Rising Sun pub in Greysteel Halloween revelers gathered for a night out.

In keeping with a village population, young and old alike came together for a party, never believing even in their worst nightmares, what was about to unfold.

At the end of the Ulster Freedom Fighters (UFF) attack a few hours later, seven people lay dead and over a dozen more were horribly wounded.

Tonight, a Mass for the Greysteel victim’s takes place at the Star of the Sea Church, Faughanvale at 7.30pm and will be followed by a remembrance vigil at the Rising Sun Bar.

1993 was in fact one of the most bloody years of the Troubles. In all, 88 people were murdered.

And, as in every year since 1969, the civilian population bore the brunt of the conflict. That year, the civilian casualty list accounted for 63 victims.

Six of the victims were Catholics and two were from the Protestant community.

The utter revulsion felt after the eight deaths at Greysteel reverberated around the globe. These heinous murders in Co Derry were part of an increasingly sickening cycle of tit-for-tat sectarian murders at that time.

A week before Greysteel, the IRA planted a bomb in the heart of the Shankill Road in Belfast killing nine people. The tenth death in that attack was that of Thomas Begley-one of the bombers.

The cycle of slaughter in 1993 reached such a pitch that it prompted sincere fears that Northern Ireland was lurching inexorably towards a final and all-out civil war. Instead, the murders at Greysteel proved the final catalyst for politicians on all sides to re-double efforts to seek a lasting resolution to the conflict.

That fervently held hope is poignantly etched on a memorial to the Greysteel victims close to the scene of the atrocity which reads: ‘May their sacrifice be our path to peace.’

In 1995, four UFF members-Stephen Irwin, Geoffrey Deeney, Torrens Knight and Brian McNeill were sentenced to life imprisonment for the murders. Knight was also convicted of his part in the Castlerock murders in 1993.

The four were released from jail in 2000 as part of the early release of prisoners section of the Good Friday Agreement.

However, Stephen Irwin was returned to prison in 2005 for four years for slashing a man with a knife at a football match. This sentence also meant that he would have to serve the remainder of the eight life sentences for his part in the Greysteel killings. He abandoned his attempts to appeal the term in 2006. But, Irwin was released again in 2013 after submitting an application to the Sentence Review Commissioners.

Court papers prepared in 2008 to determine how long Irwin would spend in jail after his return to prison in 2005 reveal how the Greysteel attack was meticulously planned in Derry city.

In a series of RUC interviews with those convicted of the murders, the court papers state that the killers were first briefed on how to carry out the massacre at a house in Bonds Place in the Waterside on Wednesday, October 27.

According to the court documents the plans were revealed to the then ‘Brigadier’ of the UFF’s North Antrim and Londonderry Brigade, often referred to in the press as ‘The Mexican.’

On the morning of the attack itself, the planners of the attack and those who would carry it out met at a house near Macosquin which was owned by the Ulster Defence Association (UDA).

Another man named in the documents and who according to claims made during police interviews, was the North West Commander of the UFF explained that he had purchased a getaway car and had parked it in Ballykelly where the weapons to be used in the murders had been hidden in a shed.

The so-called North West commander of the UFF, explained to Brian McNeill that he would show him the route to and from the Rising Sun bar and at that he and Torrens Knight left for Ballykelly after ordering Irwin, Deeney and McNeill to follow them 30 minutes later.

At Ballykelly the gang examined the weapons-an AK47, a 9mm Browning handgun and a sawn-off shotgun- and test fired them in a nearby patch of forest. The court papers say that Irwin discharged five rounds from the assault rifle and Deeney fired two shots from the pistol.

Whilst this took place, McNeill and Knight left and went over the escape route again. The North West commander of the UFF had by this stage been dropped off in Limavady.

A short while later and after the guns had been hidden, McNeill and Knight collected Irwin and Deeney from the forest. McNeill then drove to the Rising Sun where the pair went into the bar and placed an order. This was to familiarise themselves with the layout of the pub and to decide on the ‘best’ positions to fire from.

McNeill then drove them to the various places he was to wait whilst the killings were carried out, where Knight was to set the getaway car on fire and where Irwin and Deeney were to spend the night after the attack. At the final location, McNeill and Knight dropped Irwin and Deeney off so they could build a place to sleep after the killings.

Around 4.45pm, McNeill and Knight went to buy boiler suits, gloves, bin bags and insulating tape for use in the attack and then picked up Irwin and Deeney again. After another drive over the planned escape route they returned to Derry.

Back at Bonds Place Torrens Knight got Irwin and Deeney to draw up a map of the bar whilst he and McNeill went to buy petrol to burn the Opel Kadett getaway car. On his return, Knight quizzed the pair for around an hour on the makeshift map of the pub.

Chillingly, Knight turned a room at the Bonds Place house into a mock-up of the Rising Sun bar, positioned Irwin and Deeney at the door and showed them how to enter the pub as well as making them rehearse the actual shootings.

It was then, the court papers state, that it was agreed that Irwin would fire the AK-47 until its magazine was empty. Whilst Irwin reloaded the assault weapon, Deeney would fire the 9mm pistol until Irwin was ready to take over again. Deeney would then fire the handgun once more to cover their exit from the pub. During the murderous assault, Knight would be at the entrance to the Rising Sun with the sawn-off shotgun ‘covering’ that area.

During the macabre rehearsal it was also stipulated that as well as driving the ‘clean’ car to the pick up point after the attack, McNeill would drive a ‘scout car’ in front of the Opel Kadett carrying the killers to Greysteel. He was to use a pre-arranged signal of tapping his break lights three times to warn the murderers if there were any police check-points ahead.

Following the ‘briefing’, McNeill and Knight took a final run over the route and returned again to Bonds Place. At 9.15pm they left in McNeill’s vehicle and Knight was dropped off to collect the Opel Kadett before McNeill ferried Irwin and Deeney to Ballykelly forest to collect the weapons.

They were then picked up by Knight in the Opel Kadett before heading towards the Rising Sun.

When the horrendous attack ceased, Irwin, Deeney and Knight sped off towards a pre-arranged spot at Eglinton in the Opel Kadett where they met with McNeill in the ‘clean’ car.

It was there that Irwin and Deeney changed their clothes placing them, the balaclavas worn during the attack, Knight’s mask and the murder weapons in a hold-all.

Irwin, Deeney and McNeill then took off in the ‘clean’ car leaving Knight to travel alone in the Kadett towards Eglinton where he attempted to burn the car before running a short way to meet up with his three accomplices at Eglinton.

Next, McNeill dropped Irwin and Deeney off near a hide which had been prepared during the planning of the attack.

The getaway driver however took a wrong turn and deposited Irwin and Deeney at the wrong place near Eglinton. Despite this the pair got out of the car taking the hold-all with the clothes and attack weapons with them.

McNeill then dropped Knight at a bar in Derry’s Waterside where he met with a man who had agreed to provide him with an alibi. Back at Eglinton, Irwin and Deeney were walking through fields in an attempt to find the place where it had been arranged to stash the clothes and guns.

Unable to locate the hide, they eventually stashed the items somewhere between Greysteel and Eglinton and then phoned a taxi to take them back to the city.

Irwin and Deeney then went to the house at Bonds Place, owned by the now defunct Ulster Democratic Party and in which they both rented rooms. The pair then took baths and changed their clothes again whilst outside the unfolding horror of the attack began to be relayed to the rest of the world.

The following day, the UDA claimed the attack. Using its cover name UFF its statement said the “Greysteel raid was the continuation of our threats against the nationalist electorate that they would pay a heavy price for Saturday’s slaughter of nine Protestants.”

Pacemaker Press 02-11-1993 EXTERIOR OF THE BAR AT GREYSTEEL. The funeral of Steven Mullan passing the Rising Sun Bar where the horror happened. Picture By: Pacemaker.
ADVERTISEMENT - CONTINUE READING BELOW