50 years since Burntollet: The attack at the bridge 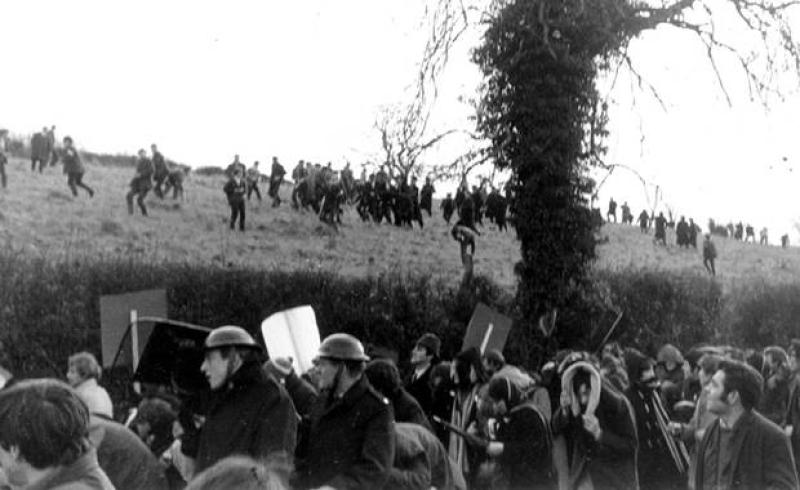 The year that has just passed saw a series of events marking 50 years since the Northern Ireland Civil Rights Association (NICRA) come to the forefront as the vehicle seeking both social and political reform here.

While there had been previous NICRA demonstrations, it was on October 5,1968 when the RUC attacked a march in Derry that the organisation was catapulted into the glare of the media spotlight.

It was at this point that The People’s Democracy group came to the fore. The organisation was established at Queen’s University a few days after the police attack in Duke Street.

At a meeting at the university on October 9, addressed by Michael Farrell and others it was decided to set up a permanent protest group.

The Cameron Report of 1969, which examined the disturbances across the North up until that point said of People’s Democracy:  “The decision, also taken at that meeting, to open membership of the group (not yet named People’s Democracy) to persons other than students of the University had two consequences.

“It marked a divorce from a purely University protest group, and opened the door to infiltration and control from persons outside or unconnected with the University, with the consequence that the aims or objects of the group would be open to alteration or expansion to cover matters or objectives well outside the avowed purpose of the Civil Rights Association itself.”

It was clear from the outset that the state viewed the new organisation as a radically led left-wing organisation. Nevertheless, People’s Democracy decided to proceed with a four-day march from Belfast to Derry beginning on January 1, 1969.

After the announcement of the Belfast to Derry march, Major Ronald Bunting, an acolyte of Ian Paisley immediately threatened to harass the demonstrators. Bunting fronted his own loyalist group which he called the Loyal Citizens of Ulster. The LCU, which existed between 1968 and 1969, was little more than another name for the East Belfast arm of the Ulster Protestant Volunteers and many of its members also belonged to the UVF.

The Belfast to Derry march was unashamedly modeled on the Selma to Montgomery march in the USA in 1966.  The result of the American civil rights march was widespread government reform after it succeeded in exposing the racism of the southern states.

In a similar way it was hoped that the local march would prove to be a litmus test for the Stormont administration of the day.

In his 1976 book, Northern Ireland and the Orange State, Michael Farrell wrote: “Either the government would face up to the extreme right of its own Unionist Party and protect the march from the ‘harassing and hindering’ immediately threatened by Major Bunting, or it would be exposed as impotent in the face of sectarian thuggery, and Westminster would be forced to intervene, re-opening the whole Irish question for the first time in 50 years.”

On each of the four days of the march groups of loyalists did indeed confront, hassle and physically attacked those taking part. At no stage did the RUC, who accompanied the march make any effort to halt the attacks.

The most serious incidents however took place on the final day as the marchers made their way from Claudy to Derry. The march was attacked at Burntollet Bridge by around 200 loyalists, including off-duty members of the ‘B-Specials.’

At the junction of the main Dungiven to Derry road, the RUC halted the march and informed those taking part that opponents of the event had gathered ahead and there was a possibility of an attack.

Michael Farrell addressed the crowd and warned them of the imminent attack and that police were prepared to get them through. But, once the demonstration reached Burntollet they found themselves under a pre-planned ambush attack from the loyalist mob. Some of those attacked found themselves in a nearby river, but the attack continued unhindered by police intervention.

Stones transported in bulk from a nearby quarry were used in the assault as were iron bars and sticks spiked with nails.

Further attacks took place as the demonstrators made their way through the Waterside and later that night members of the RUC attacked people and property in the Bogside sparking several days of fierce rioting.

The People’s Democracy march took place despite a call Northern Ireland’s Prime Minister Terrence O’Neill that for an end to all forms of protest.

NICRA and some nationalists in Derry had also advised against it. O’Neill later described the march as a “foolhardy and irresponsible undertaking” and also latterly claimed that some of the marchers were “mere hooligans”. His words simply served to further inflame the situation.

In the end, the RUC mishandling of the march only served to confirm the opinion of many Catholics and nationalists that the police force were not impartial and further alienated them from the Northern Ireland state.

The march also marked the point were the demands for civil rights began to give way to issues of national identity and the future constitutional position of Northern Ireland.