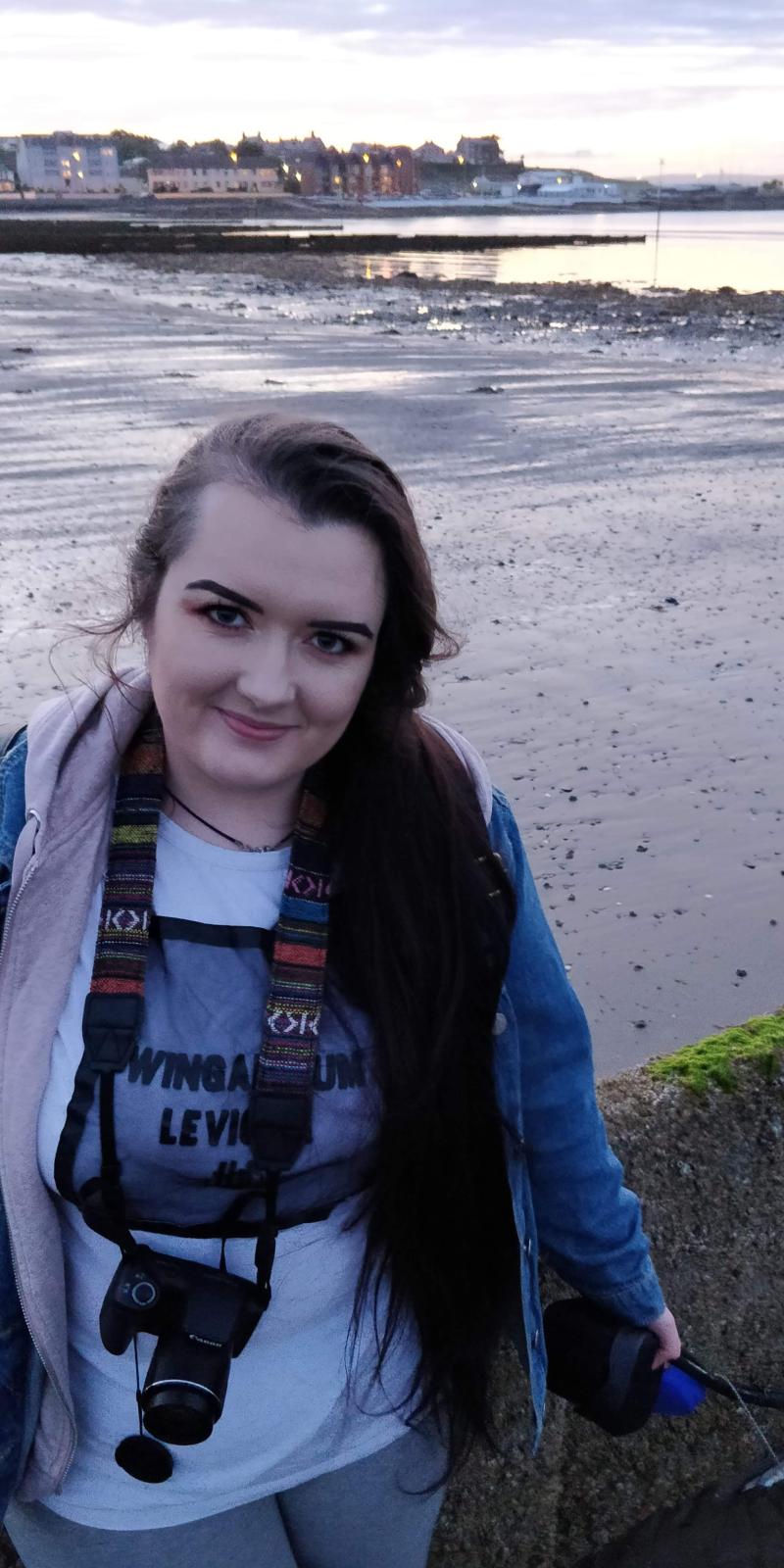 A Derry woman who has fought against mental health problems and an eating disorder has spoken candidly about her battle back from the brink and has implored other sufferers not to fear speaking out.

Whilst on the face of it her journey has been appears be successful one, Rebecca says she’s very aware that her fight against her conditions will remain a life-long struggle. However, she is determined to use her experiences to help others facing a similar plight.

On February 7, the annual Time to Talk Day will see many organised events aimed at helping people have conversations about mental health. The yearly event is organised by the Time to Change organisation and is aimed at squashing the stigma and the stereotypes surrounding mental health problems.

“Mental health issues are at epidemic levels in Derry and across Northern Ireland. I’ve had reason for many years to be passionate about breaking the stigma surrounding these issues. People feel they can’t speak up, but that’s not the case,” said Rebecca.

Rebecca now lives in Bangor, Co Down, and will be holding her own event there on Time to Talk Day. But she says that the lessons that can be learned from such events can and need to be organised everywhere, especially in her own city.

She continued: “I always had really bad anxiety. I was always told that it would get better, but it never did. I performed quite a bit, but I was bullied at school. That changed when I moved to St Mary’s. They were brilliant and my talent flourished.

“It’s only now when I look back that I can say that the conditions started in my early teens.

"I was around 16, but I can't really pinpoint an age, when I developed an eating disorder. I developed Body Dysmorphic Disorder (BDD) and then anorexia. I hated myself and I hated my body and I became dangerously thin.

“It became a real issue when I turned 18. I was prescribed anti-depressants at 19. I sought further help and things got better. The conditions left. I've been told that I was lucky because by that point it's often too late."

BDD is a mental health condition where a person spends a lot of time worrying about flaws in their appearance-flaws that are often undetectable by others.

The causes of the condition are not exactly known, but they can be genetic, caused by a chemical imbalance in the brain or as a result of traumatic experiences such as bullying. There are also links between BDD and eating disorders.

Given her past experiences Rebecca Browne now of course fully realises that she fitted well within the range of causes described above and how each of her conditions intertwined  to form a vicious circle.

While the physical effects of BDD and the subsequent eating disorder began to leave her after diagnosis and the prescription of medication, there were other factors involved. The persistent media and advertising promotion of the notion of the 'perfect body image' also played a part.

Rebecca added:"I still didn't like myself as a person. It took me four years to develop self-respect. I discovered the Body Positive Movement and it began to make me confident with my body."

"I've been signed by ACA Models in Belfast. One reason I agreed to do it was to challenge the ideas of what society thinks is acceptable in terms of looks. So, from having an eating disorder it has come full-circle to loving myself more now. It's real progress from what I was like at 16."

Rebecca said that no one ever told her there was nothing wrong with her appearance as it was in her teenage years. There was love and support from her family, but it was the pressure of images of 'perfection' outside the home that had a harmful impact.

"I was told 'you'll loose your puppy fat.' My mum of course supported me and she told me I was perfect how I was, that things would change and would get better in terms of how I felt.

"That's why it's important to ignore those impulses to try and conform to an impossible physical image or you will go down a dark path and you won't get out. You must learn to love yourself as you are," she said.

Statistics on mental health difficulties show that this year one in four of us will experience a problem of some description. And, there are common themes that run through the many and varied types of mental health issues affecting people.

For example, the overwhelming majority of sufferers say they are misunderstood by family members, shunned and ignored by friends or work colleagues and healthcare professionals.

Yet, it's the stigma and discrimination surrounding mental health issues that prevent people from seeking the help that they need. The result is that isolation kicks in and so sufferers exclude themselves from normal everyday activities. As a consequence it makes it hard to maintain relationships or employment.

People like Rebecca Browne who have faced these issues head on fully believe the a key way to getting through mental health difficulties is to avoid isolation and to speak out.

Referring to depression as a 'black dog' is a phrase attributed to Winston Churchill. In describing his battle with the condition he referred to a dark coloured canine being constantly present, growling and waiting to sink his teeth in and get a grip.

It has become a vivid visual image of depression for many sufferers. However, it is not a mental picture that Rebecca Browne readily accepts.

"In November last year I lost my dog Rascal. He was 20-years-old and I called him my little veteran because he was with me from the beginning. He gave me a reason to get up in the morning and a reason to smile everyday.

"I think animals are so beneficial to our mental health, especially to those of us who are lonely. I've said may times that he was there with me when no one else was. I'll always be grateful for that, so that's why I think mental and health and dogs go hand-in-hand," she said.

This is why when Rebecca runs her event in Bangor on February 7 there will be black dogs at hand for people to interact with.

"We're going to have some black doggies from local dog sanctuaries because they are therapeutic to those with mental illnesses. If you are going to start a conversation about mental health, one without stigma or judgement in which everyone feels safe to express themselves that's very important.

"I hope to provide a wealth of information on many different illnesses-information that people can take with them, read over and decide how they want to proceed with help. I think providing the allure of cuddles from dogs and the opportunity to open up will be the perfect chance for people to come and break stigmas."

In advance of Time to Talk Day, Rebecca also said that those who feel they are suffering from a mental health issue can take other steps to help themselves before or after seeking professional help.

She said: "I have gone through Cognitive Behaviour Therapy many times, so I know how to cope if I feel myself slipping. It's a series of tips and tricks to help me keep above the level of depression."

One particularly difficult aspect of mental health problems is learning how to deal with intrusive thoughts. To combat such thoughts Rebecca has 'characterised' these thoughts into the persona of U.S. President Donald Trump.

"You wouldn't take Donald Trump calling you worthless or telling you there was no point in being alive, so don't take it from the voice in your head," she said.

Other ideas to deflate the build up of mental strain according to Rebecca are to get enough sleep and form a regular sleeping pattern, exercise and get yourself a hobby to distract yourself from the voice in your head.

Rebecca added: "Nature is a natural anti-depressant. I live beside the sea and a beautiful park and they've been life savers to me at times. If you're chronically ill like me and on certain days you can't leave the house, get out of bed if you can, even if it's to lie on the couch instead. For anxiety, one way to tackle anything hanging over your head, like a dreaded phone call or something else hanging over your head you haven't dealt with, is to face it head on and eliminate it.

"But, on the days your not strong enough to do any of this, remember to be kind to yourself and cut yourself some slack. Keep telling yourself that it has passed before and it will pass again. Ride the wave, like every time before.

"I just felt that I had to say something that will resonate with everyone. There are so many different reasons for having mental health difficulties."

Asked what message she has for people out there who feel stigmatised by mental health issues, Rebecca said: "Don't suffer in silence. I never to spoke to anyone when I was younger. As a result it became destructive in my late teens and early 20s. If you don't speak out it will allow your brain to speak louder than your reason. Your brain will self-sabotage. Just speak to someone. It's important."

Time to Talk Day is on February 7. If like Rebecca Browne you feel you want and can organise a local event then contact Time to Change at https://www.time-to-change.org.uk/ where you will find all the advice and help needed.