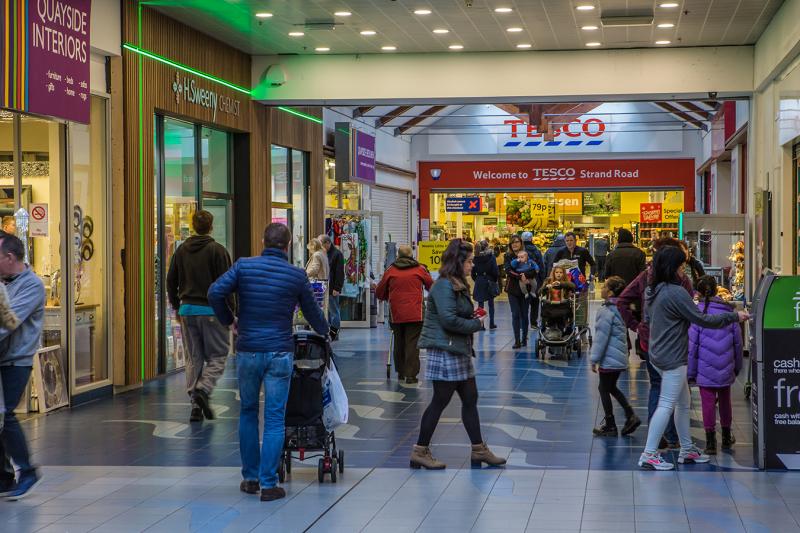 Local Tesco workers and Derry trade unions have expressed serious concerns after the retail giant admitted plans to cut security staff across its stores. The cost-saving move could potentially place customers and staff at risk if they are expected to challenge shop-lifters or violent customers. The store said that “unfortunately” at this stage, it is “unable to confirm” whether this will affect its three Derry stores as it will vary in different stores and colleagues will be spoken to beforehand. Yesterday, a Tesco spokesperson confirmed to the Derry News: “The changes are part of an annual review and as a result there will be a small reduction in security support colleagues in low risk stores.  This will not affect the robust security measures that are currently in place and the safety of our colleagues and customers continues to be our main priority.” Workers and Trade Union representatives have also told the Derry News that staff in other departments will have their hours cut – information which was not included in the company’s official news release regarding cuts last month. A local Tesco worker, who didn’t wish to be identified, said: “What was previously released in the media emphasised that counters staff would be going.  However, there are two other departments within stores that will be affected which weren't mentioned, Stock Control and Merchandising. “It isn’t a complete closure of those departments, they will still exist, but there will be a reduction in hours of almost 50% in both of those departments.” After working for the company for more than a decade he feels “very disappointed” that his hours will be slashed and said he has “no other choice” but to look for alternative employment as he’s unable to pay bills, given the reduced hours, alongside his commitments as a full-time student. He explained that Tesco management are treating their staff ”like children” by drip-feeding information and described it as “worrying” that management are now considering security cuts. In his experience it “caused nothing but trouble” by placing “staff and customers at risk” when shop floor employees were expected to cover security shifts in the past. In its January statement, Tesco announced that up to 9,000 staff would be affected by cuts.  It said that due to customers “shopping in different ways” and using counters “less frequently” its remaining fish, meat and deli counters in 700 stores will be run on a full-time or flexible basis. It confirmed it will no longer offer a hot food service at its canteens which will impact those hired by third party caterers.  However, it now appears that many more staff could be directly impacted. Further cuts come despite Tesco revealing in October of last year a group operating profit of £933m - before exceptional items and amortisation of acquired intangibles – with £685m of this profit made in the UK & ROI. ‘Additional pressures’ Trade Unionist, Niall McCarroll, said: “Trade unionists in Derry are concerned of proposals being made by TESCO management to restructure security staff functions across their stores. These proposals may include shop workers having the added responsibility of dealing with shop lifting, if implemented these changes will obviously add additional pressures to Tesco workers and potentially put them at risk. “These proposed changes by management come after Tesco made over £900m in pre-tax profits in 2018. It would appear the current Tesco shareholders business model is one focused on reducing labour costs whilst maximising profits. “This business model of reducing labour costs is clearly evident within the Tesco Quayside store where there are nearly as many automated checkouts as there are checkouts operated by workers. “Derry Trades Union Council will be ready to stand in solidarity with local Tesco workers and our colleagues in USDAW as we collectively fight against corporate greed to protect local jobs. DTUC will be discussing these proposed changes at our next monthly meeting.” ‘Shocked’ The Union of Shop Distributive and Allied Workers (USDAW) said Tesco have this week started briefing store staff who could be affected by the company’s “proposed changes” outlined in their “Building a simpler, more sustainable business” announcement on January 28. USDAW explained that the departments which may be impacted by the changes include, counters; stock control; merchandising; non-food desks; clothing – nights, and security. Separately, Elior - a third-party provider of colleague room services in stores - are beginning a consultation with their staff after Tesco announced they plan to move all colleague rooms to a vended option. Pauline Foulkes, Usdaw National Officer, commented: “Staff at Tesco were shocked and dismayed when yet another round of potential job losses were announced two weeks ago. “This clearly demonstrates the pressure retailers are under in the current very difficult and uncertain economic climate, as the cost cutting continues. The staff have played a crucial role in Tesco’s turnaround project, contributing to 12 successive quarters of growth, solid Christmas trading and over a billion pounds of profit. “Each store will be affected differently.  We will be entering consultations with Tesco to seek the best possible deal for staff.  Our aims are to save jobs and keep as many people employed in the business as possible. In the meantime we are providing our members in Tesco and Elior with the support, advice and representation they require at this difficult time.”
ADVERTISEMENT - CONTINUE READING BELOW