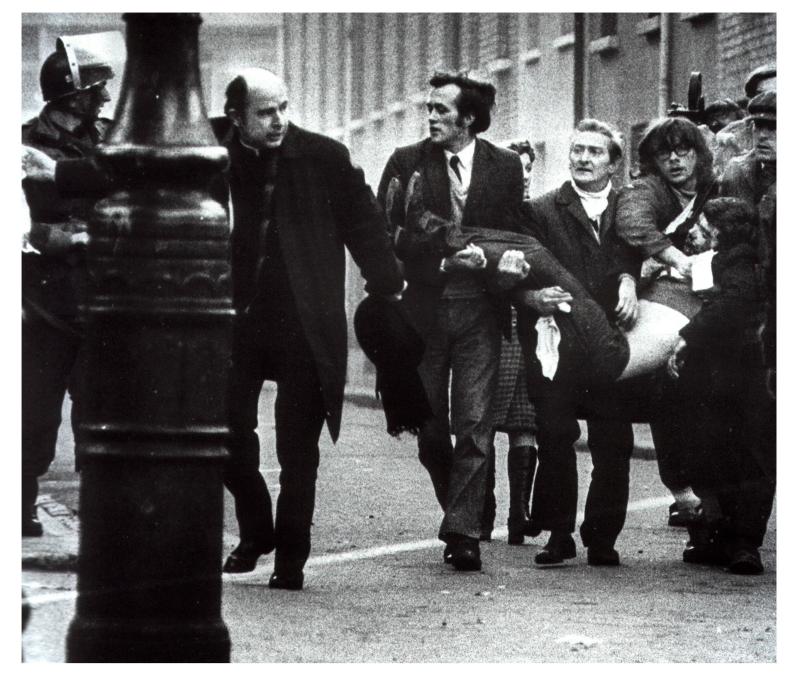 17-year-old Jackie Duddy was the first person to be shot dead by the Parachute Regiment on Bloody Sunday.

The Madden and Finucane submission to the PPS on the teenager who was shot in the area of the Rossville Street flats referred to as Sector 2 at the Saville Inquiry states: “It is common case that the military evidence suggests that the only soldiers to fire live rounds in Sector 2 were Lieutenant N, Sergeant O, Private Q, Private R, Private s, Private T and Lance Corporal V. Each of these soldiers were members of the Mortar Support Platoon of Support Company, 1 Para.

“Private R’s evidence to the Inquiry was that he had disembarked from an Armoured Personnel Carrier on waste ground on Rossville Street. He described shooting a man in the car park of Rossville Flats who he said was about to throw a bomb. On his evidence, he fired a shot at the alleged bomber. He later admits firing shots in a south westerly direction across the car park.”

However, it is noted that the Saville report concluded that no nail bombs exploded in Sector 2; that no bombs were thrown in any of the area sectors on Bloody Sunday; Private R may have heard shooting from other soldiers, notably Lieutenant N and Corporal P in Sector 3 that put him on high alert; Jackie Duddy did not have a smoking object in either hand; that the Tribunal did not accept that Private R could have believed that Jackie Duddy had a smoking object and rejected his evidence on that point and the Tribunal was sure that Private R invented this detail in order to justify his shot.”

Further portions of the conclusions of Saville are also quoted in the Madden and Finucane submission in relation to Jackie Duddy’s killing.

They state: “The Tribunal did not believe Private R’s evidence that he did not see Jackie Duddy’s body being carried across the car park, seeking to disassociate himself from the person he knew he shot; Even if Private R believed that Jackie Duddy might have been about to throw a bomb, and shot him for this reason, he could not have been sufficiently confident about this to conclude that he was justified in firing; In view of what the Tribunal describe as his “untruthful account” of the circumstances in which he probably shot Jackie Duddy, the Tribunal place no reliance on his accounts of seeing gunmen; Private R gave a false account of seeing a pistol man fall shot in order to support the account of Sergeant O about his firing in the car park and that Private R fired further shots in the car park in order to frighten people or drive them away.”

In addition the legal submission in relation to the killing of Jackie Duddy says: “In our view, the foregoing conclusions reached by the Tribunal point unmistakably towards the evidential test for a successful prosecution being met concerning the murder of Jackie Duddy on Bloody Sunday.

“In circumstances where the State, by its agents, are responsible for the death of one of its citizens (in this case, an unarmed fleeing youth) by the use of lethal force, clearly the public interest limb for bringing a prosecution has also been satisfied.

“In addition, it is clear that the evidential and public interest test is met to prosecute Private R for perjury in respect of the untruthful and false evidence he gave on oath to the Bloody Sunday Inquiry.

“On behalf of the family of Jackie Duddy we would invite you to prosecute Private R for murder and for perjury in respect of his false evidence given on oath to the Tribunal.

“Accordingly, we should be grateful if you would consider the contents of this correspondence, submitted on behalf of the family of Jackie Duddy, in advance of issuing a direction in respect of the prosecution of Private R for murdering Jackie Duddy and for perjury in relation to his sworn evidence.

“In the event that you decide not to prosecute Private R for either offence, we should be grateful if you would provide your substantive written reasons for your decisions.”

Patrick Doherty was 32-years-old when he was shot dead on Bloody Sunday. He was married with six children.

Mr Doherty was shot in the area of the front of Block 2 of the Rossville Flats towards Joseph Place. He received a gunshot wound to the right buttock that passed through his right trunk and exited the left side of his chest. It is likely he was on all fours or bending forwards when he was shot from behind.

The only soldier to admit firing shots in this area, referred to as Sector 5, is Lance Corporal F, from the Anti-Tank Platoon of Support Company of 1 Para.

Altogether, Lance Corporal F made five statements in relation to Bloody Sunday before admitting to a Lieutenant Colonel Overbury of Army Legal Services on February 19, 1972 that he had fired shots.

In that statement ‘F’ described firing his two rounds at an alleged nail bomber in Glenfada Park. He said that immediately after this he ran along the “eastern” wall of Glenfada Park to the corner. He added, that as he did so, he heard pistol shots coming from the area of the wall at the far end of the Rossville Flats.

Lance Corporal F said he shouted “there’s a gunman” and dropped to one knee and took up an aiming position. He said he saw a man near the wall facing his direction who turned as if to run and that he had an object in his hand which he claimed was large and black like an automatic pistol. This man was the only person in the area from which gunfire had come and ‘F’ said he discharged two rounds at the man who then fell to the ground.

The legal submission from Madden and Finucane to the PPS says of Lance Corporal F: “His statements to the RMP (Royal Military Police) and subsequently were utterly dishonest and designed to disguise the amount and location of his firing on the day.

“He had already made four statements to the RMP before he admitted firing any shots behind block 2 of the Rossville Flats. This utterly inexplicable except on the basis that up to that point Lance Corporal F had concealed his shooting in anticipation of not having to account for it.

“At a very early stage the army must have been in the possession of the information that two persons had been shot dead behind the flats and others wounded in that area. It would have not taken long by a process of elimination and investigation that the soldiers likely to have fired in that area included Lance Corporal F.

“The first RMP statements of Soldiers 134, 227 and 040 were all made by 3 February 1972 presenting clear information of a Paratrooper firing in the area of the rear of the Rossville Flats. It appears that in spite of making four RMP statements between January 30 and 19 February 1972 Lance Corporal F had still not been made to commit his actions to paper until 19 February 1972.”

The conclusions of the Saville Inquiry stated that even after Lance Corporal F's late admission of firing two rounds in Sector 5 he still failed to account truthfully for six of the 13 rounds he fired on Bloody Sunday. Saville rejected 'F's' claims that he fired eight shots at a flat on Block 1 of the Rossville Flats-concluding instead he fired just two rounds.

Saville also concluded that none of those killed or wounded in Sector 5 were armed nor were carrying anything that could have led 'F' to believe, albeit mistakenly, that they were armed.

And, amongst the other conclusions reached by Saville in relation to the killing of Patrick Doherty were that the victim was in a crawling posture when he was shot, although it was unclear whether or not he was moving at the time; Mr Doherty was not doing anything that justified him being shot or could have led a soldier to believe he was posing a threat of causing death or serious injury; the tribunal examined the trajectory photograph of Lance Corporal F's firing into Sector 5. It passes close to where the Tribunal are sure that Patrick Doherty was shot, but given the unreliability of 'F's' evidence it was necessary to treat the photograph with particular caution.

Saville also concluded that there was no reason for Lance Corporal F to conceal from the RMP that he fired at a man with a handgun or at a man who had fired a handgun because if he had purposely fired at targets who were posing a threat, there was every reason to disguise that and fabricate accounts of firing elsewhere.

The Saville Inquiry also rejected Lance Corporal F's account to the Widgery Inquiry that his shooting of a man in Sector 5 had "slipped my mind." The soldier did never suggested that anyone else was firing into Sector 5 and although he eventually admitted that he fired two shots into Sector 5 he concealed firing further rounds into the area.

Saville also stated that even if another soldier other than 'F' fired into this sector they were sure that it was him who shot Patrick Doherty. It was also stated in the Saville report that it was not believed that Lance Corporal F fired in a state of panic or fear and that no one in the area that he fired into presented a threat of causing serious injury or death.

The submission from Madden and Finucane pressing for the prosecution of Lance Corporal F states: "We should be grateful if in advance of issuing a direction in respect of the prosecution of Lance Corporal F for the murder of Patrick Doherty and his perjury on oath, and for perverting the course of justice that you take into account the Tribunal's conclusions (and our submissions) in respect of the shooting of Michael Kelly, William McKinney, Joe Mahon, Joe Friel, Danny McGowan and its conclusions in respect of the shooting of Bernard McGuigan."