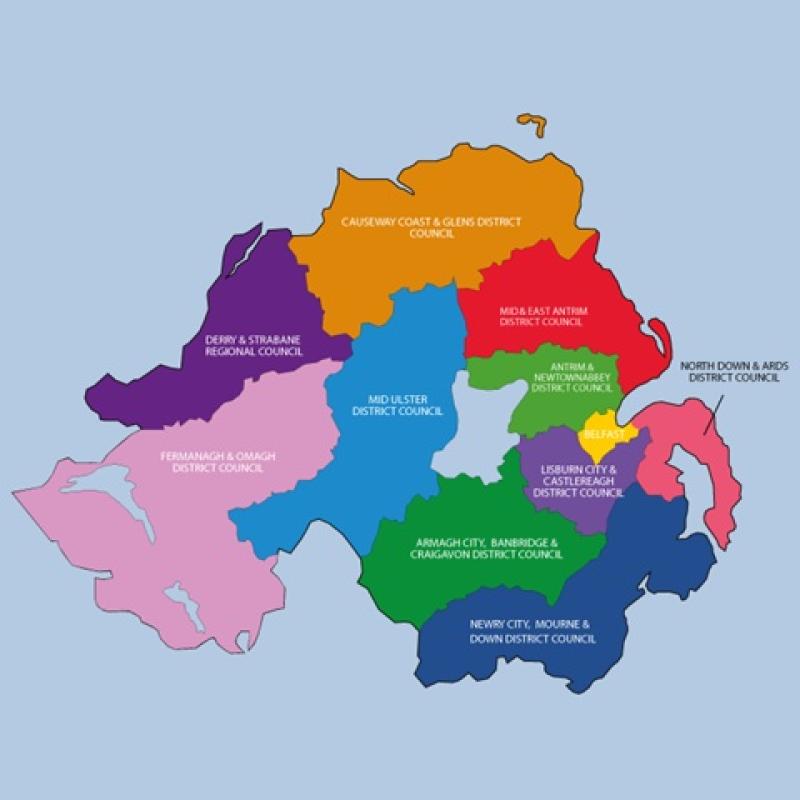 The 2019 local authority elections will take place this Thursday, May 2. It will be the second Council election since the Reform of Public Administration in Northern Ireland cut the number of local authorities here from 26 to 11 and merged Derry and Strabane to form Derry City and Strabane District Council. Within the boundaries of the former Derry City Council area there are five District Electoral Areas (DEA’s) or what were formally referred to as electoral wards. These are Ballyarnett, Faughan, Foyleside, Waterside and The Moor. Throughout today, Derry Now will publish its analysis of each of the DEA’s. The Ballyarnett DEA article will be published online at 10.30am, Faughan DEA at 11am, Foyleside DEA at 11.30am, The Moor DEA at 12 noon and the Waterside DEA at 12.30. Firstly, however here is an overview of all of the DEA’s and a brief look back at the election of 2014. On Thursday, May 2 voters across the North will elect 462 councillors across 11 council areas. Following the closure of nominations the Electoral Office confirmed that a total of 819 candidates in Northern Ireland will run-a drop from 905 in 2014. Overall in the North, the DUP are fielding the most candidates with 172, followed by Sinn Fein on 155, the UUP on 117, the SDLP on 85 and the Alliance on 85. In Derry City and Strabane District Council there are seven District Electoral Areas (DEAS): Sperrin and Derg which cover the Strabane district and Ballyarnett, Faughan, Foyleside, The Moor and Waterside which are in the city boundaries. The following figures and information do not include either Sperrin or Derg. Party by party in the city DEA’s Sinn Fein are fielding 14 candidates, the SDLP 13; DUP 6; UUP 3; Alliance 5; Independents 5; People Before Profit Alliance 4 and Aontu 1. Overall, in the five DEA’s within the city lines 51 candidates will fight for 28 seats. The Waterside DEA is the largest of the five and there are 10 candidates vying for seven seats; The Moor DEA is a lot tighter where there are 11 runners and just five seats; Foyleside DEA has nine candidates and there also five seats there. In Ballyarnett 11 prospective councillor’s will contest five seats whilst in Faughan DEA there are 10 candidates looking to take five seats. At the last local authority election in 2014, the first for the amalgamated Derry and Strabane council there were 13 women and 40 candidates whilst this time around there are 20 women and 31 male runners. Only two of the city DEAs managed to rise over 50 per cent in turnout five years ago. Those were Foyleside on 51% and The Moor on 56% with Ballyarnett and Faughan hitting 49% and the Waterside on 48%. There were many changes of party personalities over the last Council term as well as changes of political affiliations. In May 2015, the DUP’s Gary Middleton was co-opted to the Assembly and was replaced by Graham Warke and in September that year Independent representative Dermot Quigley resigned to move abroad and was replaced by Warren Robinson. In January, 2016 the SDLP’s Gerard Diver was co-opted to Stormont and was replaced by Tina Gardiner. In March 2017, Sinn Fein’s Elisha McCallion was elected as the MP for Foyle and was replaced on the Council by Caoimhe McKnight whilst earlier that month Sinn Fein’s Tony Hassan resigned his seat in order to retire and was replaced by Conchur McCauley. In September 2018 Sinn Fein’s Colly Kelly resigned and was replaced by Sharon Duddy. Two months later in November 2018 Sinn Fein’s Conchur McCauley also resigned and was replaced by Aileen Mellon. Finally, in the same month, the SDLP’s Tina Gardiner quit the council and was replaced by Sinead McLaughlin. In terms of changes in political affiliation in April 2015 the SDLP’s Sean Carr resigned and redesignated as an Independent; in February 2016, the DUP’s Maurice Devenney also followed that route, although he will contest this election as a member of the DUP again. And, in April 2016, then SDLP Councillor Patsy Kelly resigned from that party and also redesignated as an Independent. In 2014, including the Strabane DEA’s of Derg and Sperrin that complete 40 seats that Derry City and Strabane District Council has, Sinn Fein topped the poll with 19, 384 first preference votes and took 16 seats. In second place was the SDLP with 10 seats and 13,3773 first preferences. Next came the DUP on 8, 273 first preferences and eight seats followed by the Independent bloc with four seats and 5,677 first preference votes. The UUP came in last place with two seats and 4,065 first preferences. The total of first preference votes cast in 2014 was 53,748.
ADVERTISEMENT - CONTINUE READING BELOW