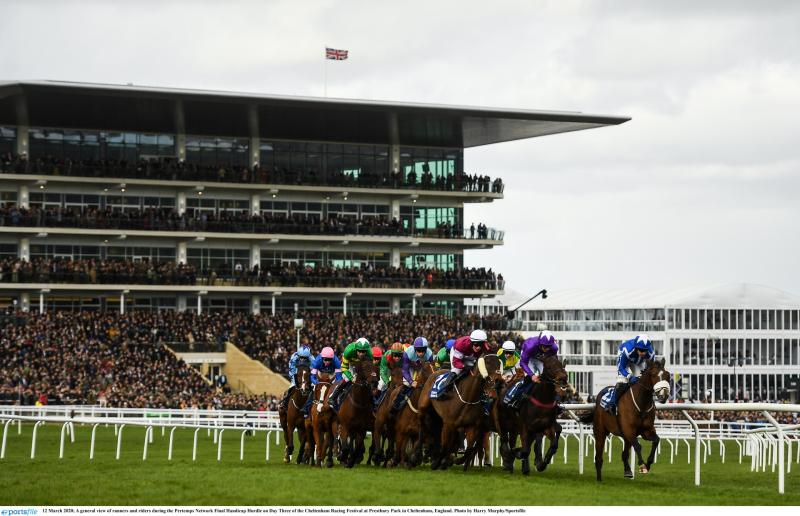 Dysart Dynamo (9/4) is the one I've landed on here after Sir Gerhard was sent to the Ballymore. He is a bit of an enigma and tends to bomb along in front and burn off his rivals. He's also won his two starts over hurdles at Cork and Punchestown and reminds me of the likes of Vautour or Champagne Fever who went like the clappers and powered away up the hill to win the Supreme for Willie Mullins in previous years. I think he's made for the Supreme if they can keep a lid on him in the prelims and the start. He would have them all at it turning in and it would take a very good one to pass him. The fact they even considered sending him to the longer Ballymore shows stamina is not a doubt and you need a bit of that to make all in a Supreme. Constitution Hill is probably the best of the English and is also unbeaten, as is Jonbon who may well be suited by a fast-run race.

I went back and forth on this race and had a good look at Haut En Couleurs who has beaten two subsequent winners in the shape of Mt Leinster and Gentleman De Mee en route to this but five-year-olds have a poor record in the race and his jumping isn't always fluent. He fell last time so may need another couple of seasons to come good. I tried to convince myself Blue Lord (4/1) wouldn't win because he was only workmanlike last time out, but he is high class and I think he can win this for Willie Mullins for a third time in five years.

I've been a big fan of Blue Lord for a while and I wasn't as turned off as some others by his performance in Leopardstown in February. Many would suggest Riviere D'Etel would have beaten him if she didn't clatter the last fence but I think Blue Lord just keeps a bit for himself. He is far from flashy but he could well get the job done again. He is unbeaten in three chase starts and although it was over hurdles, he was a clear second and going well before falling in the Supreme won by Appreciate It last year. Rivier D'Etel will get the mare's allowance of seven pounds at Cheltenham and could turn a string of 2s on the form sheet into a one just at the right time, however, she is another five-year-old and could find Blue Lord and Edwardstone too good.

Irish runners have a terrible record in this race without a winner for more than a decade and I think it could stay in Britain again. While I like Noble Yeats for Emmet Mullins, I think Full Back (16/1) is a great eachway bet for Gary Moore. We tipped up Beware The Bear to win this race at 10/1 in 2019 and it's worth noting this horse won the same prep race as him at Cheltenham on New Year's Day. Full Back won that 3M 2F contest, beating The Wolf by two lengths. That one is a good stayer, as is Full Back, and I think he'll stay all day over this similar trip. He was only put up five pounds by the handicapper for that win and has been handed a fair weight of 10st 2lbs. Bookies will be paying out on four or five places in this race for eachway terms and I just can't see this one finishing out of the frame.

Can anything beat the odds-on favourite Honeysuckle in this year's renewal of the Champion Hurdle? I tend to think not. She is unbeaten in 14 starts over hurdles and won this race last year. She's done nothing wrong and the vast majority of those 14 wins have been very comfortable for her. She also gets the seven-pound mare's allowance so not only is she the best horse in the race, she gets weight from everything else, bar Epatante who also gets the allowance.

I'd be interested in the betting without Honeysuckle market here and once you open up that tab, it's very competitive. Appreciate It for Willie Mullins won the Supreme last year but hasn't been on the track since and while he won that race by 24 lengths, it's hard to predict what he'll do in this company. That makes him interesting but I really like Teahupoo for Gordon Elliott. He's continued to improve after a good runner-up run behind one of last term's top juvenile hurdlers Jeff Kidder at Fairyhouse in April 2021. He's won all three starts this term, including an 11-length success over Darasso at Gowran in February. He'll certainly have to improve again but he can and better ground will see him to better effect too. If you think Honeysuckle is solid and I do, I would suggest putting her into a forecast with Teahupoo to finish second - that's Honeysuckle to win and Teahupoo to finish second as a combined bet.

This renewal isn't vintage by any means and Telmesomethingirl is a weak enough market leader at 3/1 despite winning this 12 months ago. I like Queen Brook and Burning Victory who won the Triumph Hurdle back in 2020 but I just can't get a read on how strong their form is beyond their own clash where Burning Victory won holding on at the death in Punchestown in February. Stormy Ireland is the choice of jockey Paul Townend from the Mullins yard and there is a lot to like there. Although she was beaten out the gate by Honeysuckle in this race in 2020 and had a brief spell in Paul Nicholls' yard after that, she has won three times this term back in the hands of Willie Mullins and it's obvious he's sweet on her chances. I actually like another of the Willie Mullins string, Echoes In Rain (10/1) as she lowers her sights considerably. She was beaten just seven lengths by Honeysuckle in the Irish Champion Hurdle at Leopardstown in February, finishing just a half a length behind the 159-rated Zanahiyr who was second. She ran comfortably up to her current mark of 150 that day and had the re-opposing Heaven Help Us a further 16 lengths behind her. Stormy Ireland was almost 40 lengths behind Honeysuckle back in November at Fairyhouse and I don't think she deserves to be a 5/1 shot. I'll happily take the 10/1 available on Echoes In Rain eachway.

Gaelic Warrior is the hype horse in this for Willie Mullins after a move to his yard from France. The British handicapper seems to have given him a lenient mark of 129 whereas the Mullins camp were expecting one at least in the mid-130s. He failed to win on three starts in France but there is big talk about him from the Willie Mullins yard. Without a run in British or Irish company, I'm happy to take him one with another Irish contender with plenty of good form in the book. The Tide Turns (6/1) is a decent price for this and has been given a fair enough mark based on his last few runs. He was only a fair flat horse but has taken well to hurdling for Gordon Elliott, winning a maiden at the first time of asking at Punchestown in January. The runner-up, fourth and fifth-place finishers from that race have all won since. The Tide Turns was then far from disgraced when going down eight lengths to current Triumph Hurdle favourite Vauban at Leopardstown last month; Fil Dor was just over four lengths ahead of our boy that day. He had to run a third time to qualify for this race and was pitched into stellar company in the Red Mills Trial Hurdle at Gowran in February. He was 23 lengths behind the winner Teahupoo that day who is now third favourite for the Champion Hurdle. He wasn't given a hard time of things by the jockey once he was a spent force so is open to a massive amount of potential. Gordon Elliott won this race in 2020 and 2018 and he has a live one once again.

This to me is a match between Stattler for Willie Mullins and Run Wild Fred for Gordon Elliott. Jockey JJ Codd usually pops up with a winner or two at Cheltenham and I think this will be one onboard Run Wild Fred (5/2). This horse is still a leading fancy of many for the Aintree Grand National so he stays all day and you need that to win a National Hunt Chase over 3M 5f. While Stattler comes here on the back of two wins, I think Willie Mullins would have liked to get another run into him before this. Run Wild Fred was second on his last run behind Fury Road at Leopardstown over Christmas. Vanillier was a further ten lengths back that day and while that horse has winning Cheltenham form, I see no real reason why he would reverse that form now off level weights. Run Wild Fred really caught the eye when he won the Troytown at Navan in November where he came up the hill there cruising, beating good horses, including Farclas by seven lengths. Davy Russell was impressed with him that day and I think he's made for a race like this. Gordon Elliott won the race with Ravenhill in 2020 and notably with Tiger Roll in the same Gigginstown colours as Run Wild Fred in 2017. We all know what he did a little over a year later at Aintree.

Honeysuckle, Echoes in Rain and Run Wild Fred ALL TO WIN - 40/1