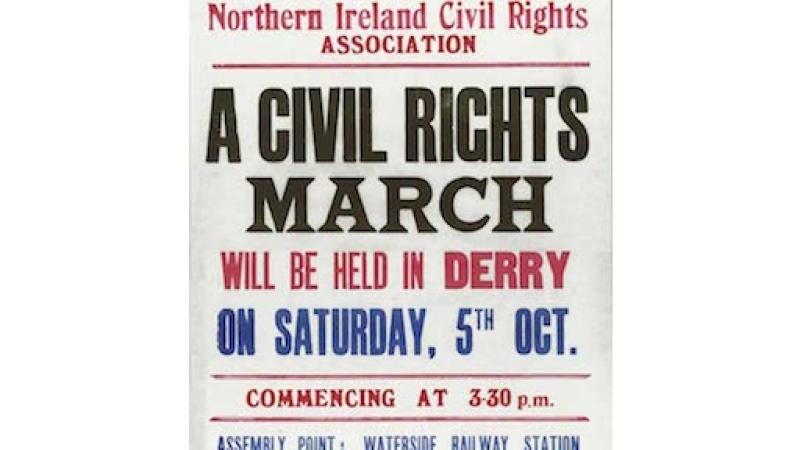 A conference is being held in Derry to mark the infamous Derry Civil Rights march of October 1968.

The event is being hosted by Community Dialogue and will take place on Saturday, October 8, from 1pm to 5pm in The Junction on Bishop Street.

Community Dialogue describes itself as an organisation “committed to a dialogue process, developed over the years, to help transform understanding and build trust among people who often hold opposing political, social and religious views.”

The organisation said: “The Northern Ireland civil rights movement was made up of a diverse group of people and organisations with differing political aims, ideologies, cultural and religious beliefs.

“They forged a unity based on a growing awareness of the need for an effective vehicle for political and legislative reform with the common vision of social justice and equality for all through peaceful means.

“During the conference, key figures from 1968 will reflect on civil rights in 1968 and, alongside other social justice activists, will also explore current day civil rights issues such as the increasing poverty driving many to despair; the lack of a Bill of Rights for all; the ongoing housing shortage; the climbing cost of fuel coupled with low incomes affecting a huge numbers of people in Northern Ireland today and the civil rights of women in society.

“The aim of the event is to promote and provoke discussion on civil rights for all.”

The conference will open with a screening of the civil rights video and music by Hugo McConnell, followed by an introduction by Tim Attwood.

Peoples’ experience of the march will then be recounted, with Aidan McKinney explaining the iconic photo on Craigavon Bridge. Other marchers will speak from the floor about their experiences.

There will then be an audience with Eamonn McCann and Bernadette McAliskey, chaired by Professor Patrick Murphy.

After this, a Rebecca McGlade piece on women in the Civil Rights Movement will be read by her daughter, Dympna McGlade. There will be a panel discussion and open plenary on Poverty and a Bill of Rights, chaired by Goretti Horgan, and including Fiona McCausland and Sinead Quinn.

Following a musical interval, there will be closing comments from Eamonn McCann and a thank you and close from Brigid Loughran.