'A comrade, a colleague and a trusted sounding board' - Mayor Sandra Duffy 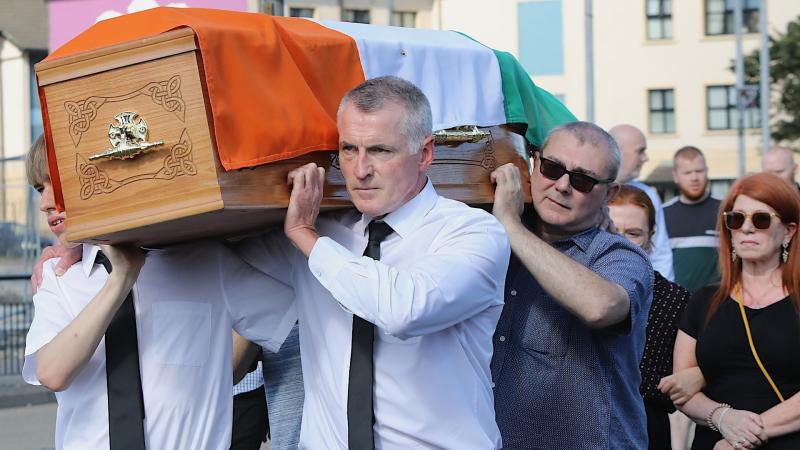 Donncha Mac Niallais' coffin is carried by members of his family through the Bogside before travelling to his home in the Waterside. (Photo - Tom Heaney, nwpresspics)

There has been an outpouring of grief in Derry and beyond since the sudden death of the former Blanketman and Gaeilgeoir on Friday.

On Saturday afternoon, Donncha's Tricolour-draped coffin was carried by members of his family through the Bogside before travelling to his home in the Waterside.

Donncha was the beloved partner of Karen, loving father Eimear and Jude and loving step-father of Paul and Ruby, beloved son of Mary and the late Billy, dear and loving brother to John, Patrick, Declan, Cathy, Frank and the late Peter, Liam and Martin, a dear brother-in-law of Nora, Pauline, Deirdre, Denee, Declan and Karen and a loving uncle to all his nieces and nephews.

His funeral will leave his home, 7 Greenwood Avenue, Prehen on Monday at 9:20am to St. Columba’s Church, Longtower for Requiem Mass at 10:00am. Interment afterwards in the City Cemetery.

Donncha was manager of Dove House Advice Services and former chairperson of the Bogside Residents’ Group, which was established to negotiate an end to contentious parades in the city with the Apprentice Boys of Derry.

Donnacha was described as "an inspiring Gaeilgeoir" by Sinn Féin MLA, Pádraig Delargy.

Extending his condolences on the death of the "lifelong Republican and local community leader", Mr Delargy said: "It is with profound shock and sadness that we today learn of the death of lifelong Derry republican Donncha Mac Niallais. My first thoughts are with his partner, his children and the wider Nelis family on this devastating loss.

“Donncha Mac Niallais has been a highly respected and committed republican activist in the Bogside for almost 50 years. A former political prisoner, he was on the blanket protest in the H-Blocks during the hunger strikes and his mother Mary was a steadfast campaigner for the rights of prisoners.

“He was an inspiring Gaeilgeoir and played a central role in developing the Irish language in the city working with other activists to set up the local Gaelscoil, the Cultúrlann and helping to ensure the language continues to flourish and thrive today.

“Donncha Mac Niallais was a community leader. He demonstrated that through the role he played in finding a solution to parading in the city.

“Right up until his untimely death, Donncha was a committed Sinn Féin and community activist and at the forefront of efforts to regenerate the Bogside and surrounding areas and working as Manager in Dove House Advice Centre.

“His loss will be felt right across the community, by his family, and all of us who loved and knew him. Ar dheis Dé go raibh a anam.”

Countless warm tributes were paid to Donncha from community groups and comerades as news of his death spread.

Mayor of Derry City and Strabane District Council, Sandra Duffy said: "Today we lost a dear friend. Donncha MacNiallais was a comrade, a colleague and a trusted sounding board, always there when advice was needed, only a few days ago we met to discuss the cost of living emergency and how we could practically help people.

"My heart is sore for the Nelis clan and I send my sincerest condolences to Karen, his children, Mary and entire family circle at this sad time."

In a social media post, Cultúrlann Uí Chanáin said: "We are heartbroken to hear of the death of our friend and comrade Donncha Mac Niallais who passed away suddenly this afternoon.

"Our thoughts are with Karen and Jude and his wider family and we hope they are comforted by the love and respect in which Donncha was held, particularly within the Irish language community he did so much to cultivate and develop throughout his life."

Gaelscoil Éadain Mhóir said: We are devastated to hear of the sudden passing of one of our Trustees, Donncha Mac Niallais who is also a Governor on our Board of Governors and a friend to us all.

"Donncha Mac Niallais has been part of Gaelscoil Éadain Mhóir since it started in 1998 and even before that when the seed was being planted to establish a second Irish medium school in our city.

"Donncha has played an integral role in the development of our school from the early days.

"Donncha has spoken out for our school on many an occasion and has ensured that we have had the support needed to be able to grow year on year.

"Donncha had a visionary approach to developing Irish medium education within our city and he wasn't afraid of the hardwork which it involved to make it happen.

"As well as all of this, Donncha was a kind, gentle man who cared for our school and everyone connected to it. He never met me without asking how all of our children were doing. Donncha's love for our school will always be cherished and greatly missed.

"We think especially today on all of his family particularly Karen, Jude and his mammy Mary."

Féile Derry said everyone in the organisation was "heartbroken" at Donncha's passing.

It said: "We will be forever grateful for his immeasurable contribution to improving the lives of all in Derry and across ireland. Tonight, a new mural has been completed in the Bogside by Razer and Paddy Nelis.

All at @feilederry are heartbroken at the passing of Donncha MacNiallais. We will be forever grateful for his immeasurable contribution to improving the lives of all in Derry and across Ireland.
Tonight, a new mural has been completed in the Bogside by Razer & Paddy Nelis. pic.twitter.com/il7Nn4jHHj