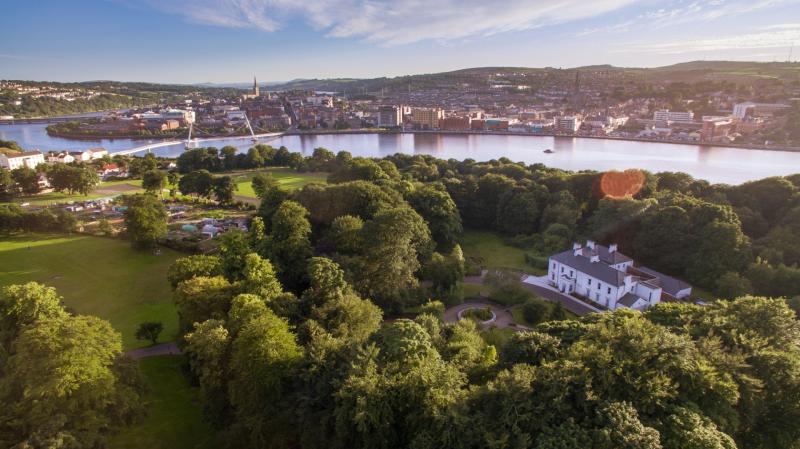 The plans for St Columb's Park include domes and an annex building, a glasshouse, sheds, vegetable gardens, service area, parking and access road for the urban farm.

The site of the project is on lands opposite Ebrington barracks and was previously used as a helicopter pad for the military and has recently been cleared of asphalt hardstanding, concrete bases, footings, redundant underground services and sundry items.

“The plans for the Acorn Farm project will be a significant addition to the strategic network of urban greenways throughout our city,” he said.

“The proposals will transform the derelict site formerly occupied by the Ministry of Defence into an £6.2m urban farm where people can learn how to grow their own plants and food.

“Acorn Farm will utilise the best possible growing techniques, technologies and sciences to produce food that is local, seasonal and readily available.”

The site has been cleared to make way for the development in line with previous planning approval.

Over 250 families in Derry and Strabane have taken the first steps towards growing their own food, with equipment provided and some expert mentoring from the Conservation Volunteers horticulturalist over the past two years through the I Can Grow Programme.

The project has brought together young and old – from children passionate about doing their bit for the environment to those who wish to pass on their experience to the next generation.

The project will see a new walking and cycling bridge facility developed across an inlet near Fort George, as well as a new greenway link which will run alongside the riverfront before connecting to Bay Road Park Local Nature Reserve, via Bay road.

This is a key milestone for this exciting project which will physically bridge a long standing gap in Derry’s Quay Trail.

“It’s been an ambition for Council for a while so I’m delighted that Council’s Planning Committee has today granted planning approval to enable the project to progress to the technical design and build stages, Mayor Duffy said.

“This project is a key component of Council’s Inclusive Strategic Growth and Green Infrastructure Plans and, once developed, will facilitate both active travel and leisure journeys to the benefit of people’s health and wellbeing across our City and District.”

The project forms part of the North West Greenway Network project which is a partnership project between DCSDC, Donegal County Council, the Department for Infrastructure (NI) and Sustrans, funded by INTERREG VA, administered by the Special EU Programmes Body to deliver 46.5km of cross-border greenway in the North West.

Welcoming the planning approval was SEUPB’s Chief Executive, Gina McIntyre added: “The news of planning approval being granted for the Bay Road Bridge and greenway project is much welcomed by SEUPB and, as a key project investor, we are very much looking forward to this transformational project being delivered to facilitate cross-border active travel journeys and the benefits that this will bring to the environment through modal shift.”

Subject to the preparation of technical designs and the successful completion of a tender process to appoint a contractor, works are on course to commence later in 2023, with, thereafter, the facility opening to the public in 2024.

Both plans were approved at the Derry City and Strabane District Council’s Planning Committee meeting on Thursday September 8.