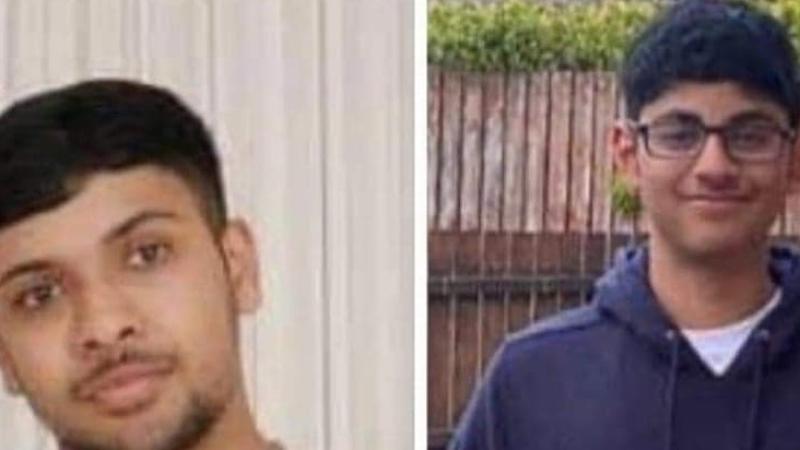 As Derry and the North West prepared to lay friends Reuven Simon (16) and Joseph Sebastian (16) to rest, Taoiseach Micheál Martin expressed his deepest sympathies to their families.

Friends Reuven and Joseph tragically lost their lives in Enagh Lough on the outskirts of the city on Monday evening.

Extending his condolences, Mr Martin said: “Our hearts go out to their families. We can all imagine young people going out to enjoy a beautiful summer’s afternoon. And for it to end in such tragedy, people availing of and using a water amenity, which we’ve all done in our different times.”

Reuven, who lived at 33 Shepherds Glen, was the beloved son of Joshy Simon and Saly Kuruvilla and loving brother of Evin Joe Simon.

Joseph, who lived at 31, Blackthorn Manor, was the beloved son of Sebastian Jose and Viji Sebastian and loving brother of Johanna and Chris.

A wake for Reuven and Joseph took place on Wednesday and continues today (Thursday) in St Columb’s Parish Hall, Chapel Road, from 2.00pm until 7.00pm.

Their joint Requiem Mass will take place on Friday, September 2, at 11.00am in St Mary’s Church, Ardmore, with interment afterwards.

Waterside parish priest Father Michael Canny said Reuven and Joseph’s families were “traumatised and absolutely devastated” and the tragedy would be felt all over the city.

Fr Canny added: “They are part of the Syro-Malabar community who worship here at St Columb’s in Waterside.

“Fortuitously, their chaplain was here on Monday evening and he was able to console them and to be with the families right up into all hours of the night.

“It’s an awful tragedy and there is tremendous sadness all round.”

Strathfoyle Community Association will hold a candlelight vigil tonight (Thursday) at 8.15pm in memory of Reuven and Joseph.

The vigil will take place at the grotto of St Oliver Plunkett’s Church “to offer solidarity and support” to the boys’ families.

Reuven and Joseph were involved with Newbuildings Cricket Club, which described its members as “absolutely heartbroken at the devastating loss of these two lovely boys”.

In a social media post, the club described the teenagers as “two of the most well mannered and lovely people who it was an absolute pleasure to have in our U15s last season”.

It added: “Our thoughts and prayers go out to their families and friends, survivors and the wider Kerala community.

“To their young teammates and friends, ‘We are here for you as a club’.

“May they rest in peace.”

There has been a huge outpouring of grief across Derry and the North West since the deaths of the teenagers, who were Year 13 students at St Columb's College in the city. The school will close on Friday as a mark of respect for Reuven and Joseph.

St Columb’s Principal, Finbarr Madden said the school community had learned of the “heart-breaking loss” with “shock and sadness”.

Mr Madden added: “No words can express the devastation that we feel as a school community, but first and foremost our thoughts and prayers are with both boys' families, community and friends.”

He said: “Joseph and Reuven were exemplary young men who epitomised in every sense what it means to be a College boy.

Both boys were mature beyond their years and had excelled in their recent GCSE examinations.

“They were very close friends who had been in the same form class since they joined us in 2017. Whenever you met Joseph or Reuven, you were greeted with a warm and friendly smile.

“It should come as no surprise, therefore, to learn that they had a large circle of friends and were deeply respected by their peers and those members of staff who were fortunate to have taught them.”

The Principal of the boys' primary school, Good Shephard Primary and Nursery School, Mrs McCafferty, said: "It is with deep sadness and sympathy that we share with our school community the heartbreaking loss of two past pupils, Reuven Simon and Joseph Sebastian.

"Our thoughts and prayers are with both boys' families, community and friends at this time."

The Mayor of Derry City and Strabane District Council, Sandra Duffy (Sinn Féin) has opened a Book of Condolence in the Guildhall in memory of Reuven and Joseph.

Mayor Duffy said it was an opportunity for the community to express sorrow and offer support to the boys’ families and friends at this time.

Expressing her sympathy, Mayor Duffy said: "The sad loss of two teenage lives in such circumstances is devastating for all of us.

"As a mother, my heart goes out to the boys' parents and to their family and friends at this time. I hope you get the strength and support you need to get you through your huge loss."

For those unable to visit the Guildhall, the Book of Condolence can be signed online here.

SDLP Foyle MLA Mark H Durkan has said the whole city is in mourning following the death of the two teenagers.

Mr Durkan, who lives in the area, attended the scene on Monday evening.

He said: “Our entire city is in a deep sense of shock and mourning following the news that Reuven Simon and Joseph Sebastian lost their lives while swimming in Enagh Lough on Monday evening. The loss of two young lives in such tragic circumstances is utterly heartbreaking and I know I speak for everyone in Derry when I say that our thoughts and condolences are with the families affected.

“Our thoughts are also with the teenager currently recovering in hospital and the other young people who were present on Sunday evening when this incident occurred. I spoke to some of them at the scene and it was clear to see they were distraught with what took place. This is the first incident of its kind at Enagh Lough in many decades and is a stark reminder of the need to take care around water.

“The families of the young boys who lost their lives are well known and respected in our city and I’m sure that the people of Derry will rally around them and support them in any way we can, as we do anytime this area is touched by tragedy. I hope the outpouring of support will provide them with some comfort in the difficult time ahead.

“I have had a very close relationship with the Kerala community in Derry for over 15 years and have known Reuven and Joseph since they were babies. It is impossible to convey the devastation that has been visited upon this hard-working and humble community in the wake of this tragedy.”

The North West Migrants’ Forum also shared its deepest condolences to the families of Reuven and Joseph.

"We know both families and can only imagine the incalculable pain they are feeling today.

“Thanks must also go to emergency services who were on the scene. Our thoughts and prayers are with the entire Kerala community as they try to make sense of this awful tragedy. Remembered fondly."

Extending its sympathy, Kumon Foyle Study Centre said it had known Reuven and Joseph in their primary years.

"It has come as such shocking news to learn about the terrible loss. The heartbroken families and the wider community will be in our prayers. Our deepest condolences and sympathies to all of them."

Mark Deeney, Western Area Commander for the Northern Ireland Fire and Rescue Service (NIFRS), which was present at Enagh Lough with the other emergency services on Monday as the tragedy unfolded, said the organisation's thoughts were with the families and friends of the boys affected.

He added: “Firefighters were called to the scene at 6.31pm, and deployed a number of fire appliances and a specialist Water Rescue Team. On arrival we were informed that two teenage boys were missing in the water approximately five metres from the end of a jetty.

“Members of the Water Rescue Team from Crescent Link immediately entered the water and, supported by other personnel, were able to recover one of the boys within 20 minutes.

“He was transferred to hospital by the Ambulance Service but sadly did not survive. The search continued for the second boy, and his body was recovered just before midnight after an extensive search.”

“Despite the tragic outcome I would like to commend the efforts of our crews at the scene who worked tirelessly in an attempt to rescue the boys. Working in partnership with our colleagues in the Police Service of Northern Ireland, Northern Ireland Ambulance Service and Foyle Search and Rescue, everything possible was done to give them the best chance of survival.”

Mr Deeney added, following this challenging incident, NIFRS was continuing to support its crews and its colleagues in its Regional Control Centre, with specialist debriefs.

“The two boys, their parents, their families and their friends will be forever in our thoughts and prayers.

Well known Derry entertainer, Micky Doherty, and his aunt, Jean Rodgers, have set up an online JustGiving fundraiser for the families of Reuven Simon and Joseph Sebastian.

Donations can be made to the fundraiser, which has already raised twice its target, at: ‘Weʼre raising £5,000 to The tragedy in Enagh Lough, Strathfoyle’.