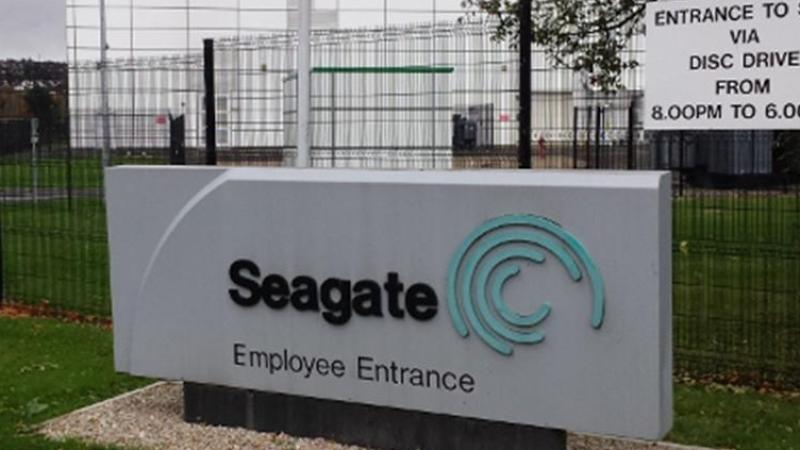 Workers at the Seagate Technology plant in the city are concerned about the imminent  imposition of a non-negotiated, below inflation pay increase.

The plant which manufactures hard disk drives is not unionised, although individual members of the workforce do belong to trade unions.

Speaking to Derry Now, Derry City and Strabane District councillor, Shaun Harkin (People Before Profit) said he had been contacted by Seagate employees and, based on the company’s publicly available financial reports, Seagate could definitely afford a substantial pay rise for its workforce.

Cllr Harkin added: “The Seagate employees have put out an appeal, which is directed at management and political representatives here in the city, to try to get a decent pay increase.

“Seagate has made it very difficult over the years to get trade union representation, which means pay rises are not negotiated.

“From my perspective, we are obviously supporting the workers and we have supported them in the past, when there were issues around covid. People presume all Seagate workers are on very good money but that is not the case.

“I talk to workers who are struggling, like many people who are in ‘decent’ jobs. There has been very little help from the government for people who are in full time work, so people are depending on seeing any improvement or any help through their wage packets,” said Cllr Harkin.

In the course of his research, Cllr Harkin said Seagate had made huge profits over the last number of years.

He said: “Fairness would see workers getting a decent pay rise.

“I have also heard from Seagate workers that they are prepared to take action. I don’t know what form it would take. This is based on waiting to see what is announced and looking at what other workers are doing.

“People who are standing up for themselves are definitely getting a better deal out of it. It is also worth noting people who have stood up have not necessarily gone on strike.

“What I will be doing from our perspective in People Before Profit is asking for a meeting with Seagate management to encourage them, given all the effort the workers made right through the pandemic, to award a cost of living pay rise,” said Cllr Harkin.

According to Shaun Harkin, during lockdown, Seagate’s workforce got key worker status, which meant they could work right through the pandemic.

He added: “Even though the numbers were down at times because people were forced to take time off because they were infected or were close contacts, the firm maintained 100% production.

“We weren’t necessarily clapping for Seagate workers but from Seagate’s point of view, its revenue went up during the pandemic and so did its profits. I think that should be reflected in this pay offer.

“There isn’t a negotiation right now between the workers and the company. It is not the same as when you are in a unionised workforce. In Seagate the pay rise would just be imposed. That is why I think elected representatives have a role to appeal to management in support of the workers.

“I would be calling on other representatives to back the Seagate workers in whatever way they can,” said Cllr Harkin.

In their communication with Cllr Harkin, the Seagate workers said a cost of living pay increase was essential.

They argued: “The current Retail Price Index (RPI) rate of inflation is 11.8%. To stay even, we need an equivalent pay rise. Anything below that  is a pay cut.

“Many workers in Derry are struggling to make ends meet, and Seagate employees are no different. There has been virtually no help for us from Westminster or Stormont.

“We stayed on the shopfloor during the pandemic with output up 17% and the factory running at 100%, even though we were short-staffed. None of us should be going to a food bank to feed our families, or struggling to put fuel in the tank, or pay household bills.

“Seagate CEO, David Mosley, received a $2M bonus to take his overall lift for 2021 to $11,641,189. Shareholders were also massively rewarded with a $2.4B return through dividends and share repurchases.

Workers across Ireland and Britain are taking a stand through their unions for real pay rises. Seagate workers can do the same.”

The statement said Seagate was “awash with profits” and could afford a cost of living pay rise.

It continued: “Seagate's financial achievements for fiscal 2022 were noteworthy. We grew revenue by 9% year over year, fuelled by 24% growth in our mass capacity products. We expanded profitability even faster than revenue.

"In fiscal 2022, we generated $1.3 billion in free cash flow, our highest level in four years, and maintained our commitment to returning cash to our shareholders, funding $610 million in dividends and repurchasing 9% of our shares outstanding."