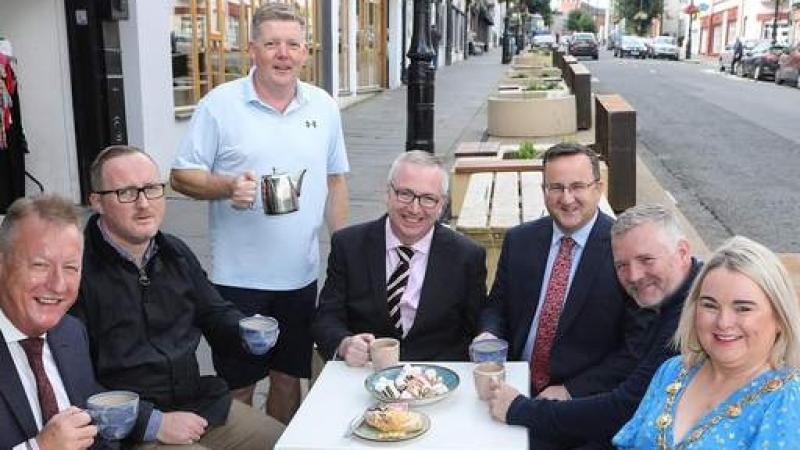 The combination of Derry city centre’s new public realm furniture and its partial one-way traffic flow has been branded “an accident waiting to happen”.

Speaking to Derry Now, Declan Moore, the owner of Claude’s Café at the top of Shipquay street, questioned why essential disabled and e-parking spaces had been removed “apparently without consultation”.

“Shipquay Street has been forgotten about. There is never any investment into it,” said Declan, who has been in business for 20 years and is best known for providing Christmas day dinners for the local community. “I do not feel I am getting good value for money for my £6,000 annual business rates.

“The first thing was the one-way system on Ferryquay Street. I think that has been a disaster. It encourages traffic to come up Artillery Street and have a blind corner. If there has not already been, I think there will be accidents.

“Traffic is essentially coming up steep, narrow side streets. There is too much congestion on roads that were not meant to take that much traffic. Apart from anything else, you literally cannot see traffic to your right when you come up Artillery Street, unless you are nearly entirely out of the actual side street.”

Wary of being branded a ‘naysayer’ Declan said he encouraged any public realm works, having called for a café culture for years in Derry.

He added: “However, I would love to know who designed these recent installations and who they consulted when making decisions, because they certainly did not come anywhere near any business colleagues of mine before these decisions were made.

“The first seating that went in place was behind the Austin’s building, where they took away e-parking spaces, the only ones in the actual city centre apart from car parks. They put them in at great cost and then took them out. They did away with disabled parking spaces, which were invaluable and much needed, as well as regular parking spaces, of which we do not have enough.

“They then put seating behind what is essentially the darkest, coldest place in the entire city centre. Go there morning, noon or night and you are in the shade and it is freezing. If they are going to put seats and chairs and tables out there, they would need to give them fur coats.

“They should have, and I would have been the first to suggest this, used the other side of the Diamond [outside the Housing Executive offices] where they didn’t need to take away any car parking spaces. They had a natural sun trap, an actual space designed already. You could put seating there and chairs and tables. They could have left the car parking spaces as they were,” said Declan.

Turning to the newly unveiled public realm furniture in Bishop Street, Declan said there were now two cafés benefitting from all the outdoor furniture “for some crazy reason”.

He elaborated: “They have taken yet more car parking spaces away, more disabled spaces away, even though there had been an inadequate amount of spaces anyway.

“The design looks like something done by a first year metalwork student. Who designed it? It is pathetic looking. It probably will encourage an accident because people will come round there too fast in cars. I, for one, would not be sitting there because I think it is dangerous.

“I certainly would not let my child sit there. If you imagine a child coming on to that road, which is still two-way traffic and has been narrowed down, unless they are planning to change that as well.

“The entire thing is totally disjointed. As far as I am aware, from a business perspective, it creates an unlevel playing field. The best we have got out of this entire thing is zero parking outside my café. They came and marked the kerb with two yellow lines, several places down, so I can’t even stop my car outside my café to load or unload and customers literally can’t stop their cars.

“You daren’t leave your car for five seconds. Before, as a business person, you could unload your car and take stuff into your shop. Now I have been told, to stay within the law, I would need to block Shipquay Street and double park. That won’t get me a ticket, apparently,” said Declan in exasperation.

Declan said on Thursday, a customer who was having a meal in Claude’s had to leave his dinner half eaten because the traffic wardens were pursuing them.

“But, I look at Bishop Street and I see all the car parking spaces gone and seating put there. I am asking myself the question, ‘Is that value for money for the rates that I pay?’

“I would say to the City Centre Initiative (CCI), which I assume was involved in this, ‘Get your finger back on the pulse. Speak to businesses because there are too many people kicking about town, consulting absolutely no-one’.

“I would love to know where CCI is in this. I have been here 20 years. It is not as if we are blowins. We have a proven track record. We have no intention of going anywhere. But from CCI’s point of view, which is funded by Derry City and Strabane District Council, I would like to know what consultation took place. Who did they speak to?

“If you are going to take such drastic measures in the city centre, by taking disabled and e-parking spaces away, extensive consultation is needed. I would love to have a costing for all of this. Just take a walk around the coldest part of the Diamond and see how many people are sitting there, zero,” said Declan.

Questioning the lack of a joined up approach to the city centre, Declan said it was unclear what existing city centre businesses were actually consulted.

He was also concerned about the poor air quality people using the new outdoor furniture would have to endure, given the fumes from the congested traffic in the city centre.

“I have a two-year-old granddaughter and there is not a chance I would sit out there with her.”

“I think you will see a lot of businesses closing come January because everyone is getting it super tight. They just won’t be able to fulfil the obligations of all the bills that are coming now, in terms of electricity and foodstuffs.

All these things have gone up. You know electricity is expensive when I am making calls to query the bill to make sure they have got it right. I haven’t done that for 20 years since we opened, when every bill was frightening.

“At the minute we are taking a massive hit because the laziest thing to do in business is to put the prices up and pass it on to customers who are in turn struggling themselves, and I don’t think that would  encourage business.

“We are trying to think of creative ways in which we can without the inevitability that we can no longer stay in business without passing some of these costs on,” said Declan.

In a requested statement, a spokesperson for Derry City and Strabane District Council told Derry News: “The new outdoor seating and dining area in Bishop Street is part of a temporary public realm space that has been created to enhance the character of the area and increase footfall in local businesses by offering additional amenities for customers to avail of. The temporary pilot is in place for an initial trial period of 18 months.

“A full consultation was carried out in 2021 where local businesses had the opportunity to give their views and feedback on the proposals. A further consultation will take place during the project and will determine whether the new infrastructure will remain in place beyond the pilot period.

“A full assessment was also carried out on the potential impact on city centre traffic flow and parking provision and that impact was deemed to cause minimal disruption. While the works have seen a small number of on-street parking spaces being made temporarily unavailable, there are still in the region of 450 off street and on street parking spaces for use in the local vicinity.

“Anyone with any queries or feedback relating to the scheme can contact regeneration@derrystrabane.com.”

Derry News also contacted the City Centre Initiative about Declan’s concerns but at the time of going to press, no reply had been received.