Marriage and Motorman make it a day to remember 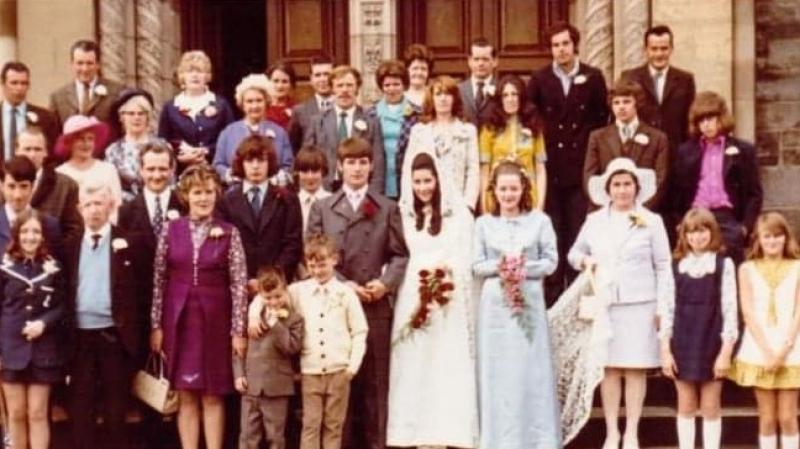 Marriage and Motorman make it a day to remember. (Carol front and far right).

When Derry News advertising manager, Carol O'Hagan, said she would never forget where she was on the day of Operation Motorman, it was not for the same reason as most Derry people.

There may have been 1,000 British soldiers and 100 armoured vehicles removing the barricades around Derry's Bogside and Creggan 'no go areas', not to mention and a gun boat on the River Foyle, but Carol was a guest at the wedding of Rose (née McConnell) and Johnny Killen.

“I remember the wedding was in the Long Tower Chapel and I wore a dress which was green, white and orange,” she smiled.

Speaking to Derry News on the occasion of their 40th Wedding anniversary, Johnny and Rose said they had known a number of days prior to the wedding the British army was going to move in.

“We knew about it all right. The whole of Derry did, but we were still hoping they would put it off so that we could go through with the wedding, said Johnny.

“Then in the early hours of the wedding day, we heard all the shooting and the bother breaking out, and we knew that was it. Our wedding was at ten o'clock in the morning at the Longtower Chapel and Fr Denis Bradley came straight there from attending young Seamus Bradley."

“The barricades and checkpoints erected around the city made it impossible for the entire wedding party to attend the ceremony. Rose was living in the Waterside at the time so she was coming over to her mother’s at the Lone Moor Road. I was living in Southway, and nothing was getting through.

“So I went down to the barricade in my suit and flowers, and asked them to let the car through. They relented and allowed one car through the checkpoint, but the whole wedding party, my family and Rose’s family, had to get in just so we could get to the chapel,” said Johnny.

Rose said the wedding ceremony itself had been “surreal”.

“Father Bradley was conducting the ceremony, and we could all hear the sounds outside of shots and petrol bombs, and the chapel grounds were just filled with soldiers.”

With the rings exchanged, the happy couple and their guests then faced the daunting task of making their way to the former Quigley’s Hotel in Foyle Street for the reception.

Johnny recalled: “We got back in the same car and drove down Bishop Street as Abercorn Road was blocked off because of the bridge, and then we had to walk along Foyle Street with all our gear on us.

“So the few of us that were there got our breakfast and we were leaving to go over to Rose’s mother’s house on the Lone Moor, but I was stopped and searched by a soldier.

“He gave me the full search in the rain and I was drenched. A reporter from The Mirror was there and he asked if could take our picture and do a story on us, and we said all right. But he told us not to smile when the picture was taken.”

That night the couple left for their honeymoon with Johnny’s relatives in East Anglia, but not before an interesting encounter with another Derry couple at the airport.

“There was a couple at the airport from Creggan, and they had got married that day too, so we were chatting to them how they got on. We’ve never seen them since, but I’ll always remember that,” said Johnny.

“At the time you were angry, but there really wasn’t much you could do about it, you just had to get on with it.

“The only regret is that a lot of people couldn’t actually get to the wedding because of the barricades.

“But there was never any question of us not going through with it, Rose was up that morning
and determined to do it.

“We were just living in interesting times I suppose.”

“And we never got our deposit back for the reception,” Rose added.