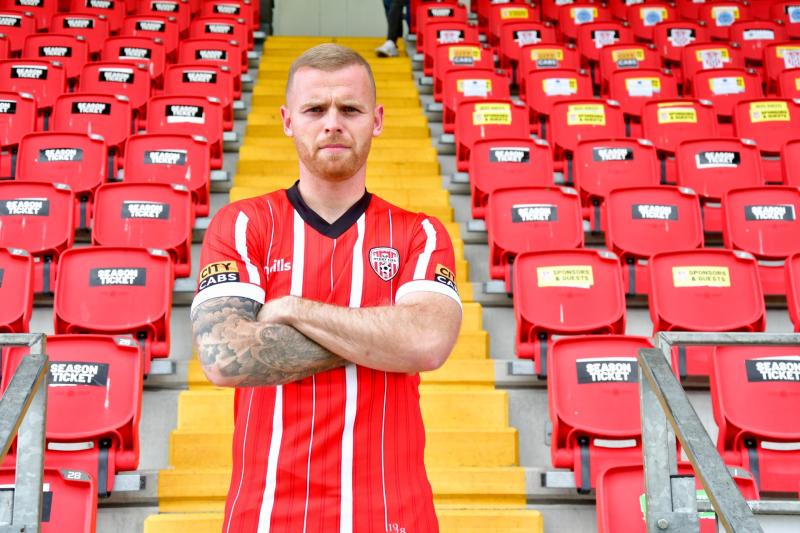 Mark Connolly was unveiled at the Brandywell today. Pic by Kevin Morrison.

Defender Mark Connolly has admitted that he was impressed by the lengths Ruaidhri Higgins wet to sign him after he was unveiled as a Derry City player today on a two-and-a-half year deal.

The 30-year-old is officially a Candystripe just a week after leaving Dundalk to return to Dundee United on the completion of a six-month loan deal. But Higgins and assistant manager Alan Reynolds flew to Edinburgh earlier this week to convince the defender to come to the Brandywell, and those efforts proved successful.

"My priority was always to come back to Ireland to be closer to my family, but I needed the backing from my family in Scotland," he explained.  "When Ruaidhri and Alan flew over to meet myself and my wife – I haven’t had that in my career. I’ve had a lot of managers talk to me on the phone, but not fly over to speak.

"They also came over to speak to my wife and I was more worried about that than everything else. Rosa had questions about living here and that and that was probably top of our list because we have two young kids. Rosa felt comfortable, I was comfortable, and with the ambitions of the club and the way it wants to move forward, it was something straight away that I wanted to be a part of."

Unsurprisingly, Higgins was thrilled to sign the defender, who arrives at the club just days after Eoin Toal joined Bolton Wanderers.

"Mark will be the first to tell you this has happened very, very quickly. Friday night it became public knowledge that his loan had come to an end at Dundalk and with Eoin leaving, we were in the market for a centre-back and it would have been foolish if we hadn’t explored the option, and that’s what we’ve done and we have managed to secure his signature.

"I’ve gone on record as saying that unless you’re from Derry, I probably wouldn’t consider signing someone who is over 26 years old, but that changed instantly after one conversation. Actually, during that period when we were struggling to win a game, that maybe changed my mindset slightly in that I felt we lacked another experienced player, but we’ve managed to bring him in and we’re thrilled to be honest.

"I think he will bring so much to the club on and off the pitch and our young players will learn so much. He’s a born leader, a natural leader and we’re absolutely delighted to secure his signature."

Higgins also dismissed the suggestion that he had got one over his old club Dundalk, by taking one of their best players.

"It’s not about that for me, even though people are jumping on that because a few have come here from Dundalk," he insisted. "I have the utmost respect and I mean that – Stephen O’Donnell is one of my best friends, in the world, never mind football. It’s not about that for me, it’s about what Derry City needed. We worked extremely hard; I know we only had our initial conversation towards the end of the weekend and early Monday, but we worked extremely hard to bring him here and thankfully he’s here."