Anger over removal of direct trains for Derry

Translink divert rail services away from Derry throughout the summer 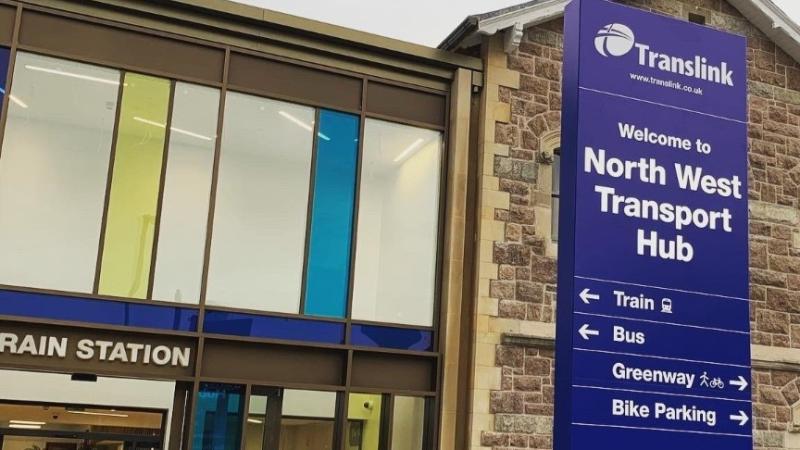 Anger over removal of direct trains for Derry

“The needs of the bucket and spade brigade east of the Bann are elevated above those of Northern Ireland's second city.”

This was the view of Steve Bradley who chairs the Into the West Rail Lobby group, which has been campaigning for the upgrading of Derry's train services since 2004.

Mr Bradley was reacting to the decision by Translink to repeatedly divert rail services away from Derry in favour of Portrush throughout the summer season. He was particularly concerned this was allowed to happen even during the city’s huge Maritime Festival last week, which attracted over 150,000 people to Derry.

The intercity railway line between Derry and Belfast carries one train every hour in each direction Monday to Saturday and one every two hours on Sundays.

For passengers travelling to Portrush, a short spur line runs there from Coleraine, where a service is scheduled to meet trains from both the Belfast and Derry direction for the 12 minutes onward journey to the North Coast.

However, according to Steve Bradley, Translink has developed a habit of reversing the usual pecking order for the North-West’s rail infrastructure at extremely short notice during the Summer.

Speaking to Derry News he said: “It is continually diverting some of the rail services which normally run between Derry and Belfast, to run instead from Belfast to Portrush.

“When that happens, passengers travelling to or from Derry are forced to change at Coleraine and wait for an onward connection, sometimes for up to an hour.

Into The Rail is concerned these diversions reduce Derry to the status of a spur line off of a direct Belfast to Portush service, and are further evidence of an east-west divide in the quality of train services here.”

Steve Bradley confirmed these diversions occurred with little or no notice. As a result, Into the West has called on Derry City and Strabane District Council to intervene in the situation.

Mr Bradley added: “It is deeply concerning that Translink thinks it is acceptable to reduce Derry to an irrelevant spur line whenever Belfast folk fancy a day at the seaside.

“This farcical situation wouldn’t happen anywhere else in Ireland or Britain but because different rules seem to apply in NI, the needs of the bucket and spade brigade east of the Bann are elevated above those of NI’s second city. This has come hot on the heels of the recent fiasco with Translink’s ‘special’ train for Derry GAA supporters, which only ran from Belfast.

“There is clearly something wrong within Translink management when it thinks it is acceptable to always treat Derry as a second-class destination and their lowest priority.

“We have tried to raise this issue directly with Translink management ourselves, but have not received a response. We have therefore written to the Mayor and Chief Executive of Derry City and Strabane District Council to request it formally expresses its dissatisfaction to Translink and demand change,” said Mr Bradley.

Into the West has also sought a meeting with Infrastructure Minister John O’Dowd in order to raise the issue.

Mr Bradley said: “It is time those in power intervened to stop the blatant and continual discrimination against rail services in the west of Northern Ireland.

“Into The West is particularly concerned changing scheduled services at short notice will undermine faith in rail at a time when it continues to grow in popularity West of the Bann. Derry receives a significantly worse quality of rail service than every station east of the Bann does on the same line. Yet despite that, passenger numbers from the city continue to grow.

“Derry is ranked as Northern Ireland's 9th busiest rail station in 2021 to 2022, up from 17th place in only five years. This shows the huge potential that exists for rail in the North West, yet everything Translink does appears designed to stifle that growth.

“People will not use rail from Derry if they think it will involve changing trains and long waits, so Translink must now publicly commit to ending this policy of diverting Derry-Belfast trains to Portrush. It is time for Translink to stop this clear regional bias, and genuinely work to make rail a more attractive travel option from the north-West instead,” said Steve Bradley.

Into the West pointed out this route change only happens sporadically, and seemingly whenever Translink decides that the number of passengers looking to travel to Portrush has reached an unspecified level.

The rail campaigners said it was unclear on what basis Translink made the decision to re-route trains, and how far in-advance they choose to do so.

The group fears therefore fears, if it is a sunny day in July or August, Translink will decide at short notice to divert some Belfast rail services to and from Portush instead of Derry, reducing Northern Ireland’s second city to what it described as "the status of an inconvenient after-thought”.

In recent days, Into The West was contacted by rail users whose trains to Derry were re-routed to Portrush with little notice and who found themselves stranded in Coleraine.

Some disgruntled passengers took to social media to air their frustrations.

Twitter user Brian Bridges (@BridgesBB), a Research Director at Magee Campus, tweeted on Thursday, July 21: “My train between Belfast (8:15 departure) and Derry ended up becoming the seaside express to Portrush and I’m waiting for 50 minutes at Coleraine, as are lots of other Derry passengers. No clear explanations from Translink NI.”

So, my train between Belfast (8.15 departure) & Derry ended up becoming the seaside express to Portrush and I'm waiting for 50 mins at Coleraine, as are lots of other Derry passengers. I'm sure staff on ground doing their best, but no clear explanations @Translink_NI @RailDerry

When Translink responded to say it was due to a signalling problem, Mr Bridges disputed the explanation and added: “It’s happened to me quite a few times before on this route and it’s also affected many colleagues. What often compounds the issue is that passengers are invariably left to wait for the next train approximately one hour later.”

Thanks, has happened to me a few times this year, so have replied to them!

Another Twitter user (@oneill_shaun) used the train to come to Derry for the Maritime Festival and had to change and wait at Coleraine.

I was on the train and it was a shambles. In like sardines and most passengers acting like vultures. Lost over two hours of a five hour trip due to delays. I spent as much time waiting in coleraine as I did at the event in Derry. Staff not informed.

He tweeted “I was on the train and it was a shambles. Lost over two hours of a five hour trip due to delays.

He concluded that the experience had “ruined our day in Derry".