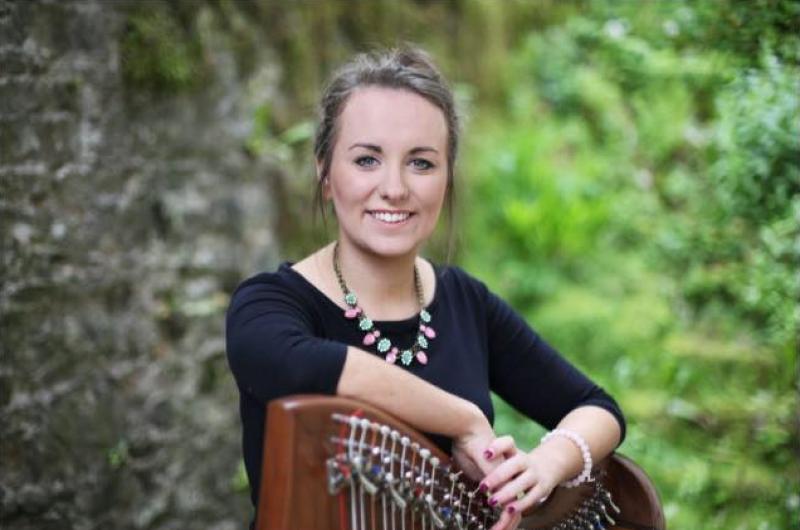 Couty Derry Harper Lauren O’Neill will be performing at the Harps Alive Festival | An Chruit Bheo | Harps Leevin in Belfast this evening.

Lauren will perform alongside fiddler Eugene McKenna at Strike Up The Harp at the Music Hall at The Deer’s Head today, Friday, July 15, an evening filled with the exploration of harpers’ tunes from the esteemed Bunting collection.

Regarded as the leading light in harping in Northern Ireland, Lauren’s PhD produced ground-breaking research into the relationship between the harp and 16th century Bardic poetry. Since then, she has gone on to establish an active performance and teaching career as she maintains an instrumental role in the revival of the Derry harp school.

Organised by the Harps Alive partnership, the festival will bring together the finest harpers from across the island to recognise the landmark event that collected music more than two centuries ago for future harpers to learn from and perform.

“We are delighted to bring harpers from all over Ireland together to mark 230 years since the Belfast Harpers’ Assembly in Belfast” she said.

“Our harping heritage transcends boundaries and has really connected the partners, north and south.

“It is wonderful to hear the harpers’ music reflecting our living tradition and to see that there is so much interest in it. We are looking forward to welcoming audiences across the city of Belfast to our concerts, talks and exhibitions and in Dublin later in the month.”

“In bringing more than 50 harpers to Belfast, the festival will create the largest ever such assembly in the city,” he said.

“It will be a celebration of the heritage of the harp and the contemporary revival of harp playing, and when it concludes we hope to have created more awareness of the harp tradition with the public and leave a lasting legacy.”

For tickets to Lauren O’Neill at Strike Up The Harp, as well as more information about the festival, go to http://harpsalive.com