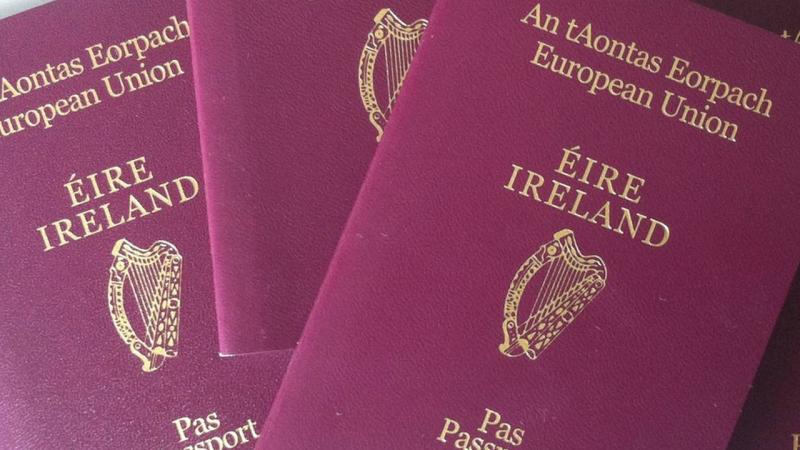 Irish Citizens living in Derry and the North are not being categorised as 'non domestic' applicants when they apply for Irish passports.

The issue was raised in Seanad Éireann by Senator Niall Ó Donnghaile (Sinn Féin) on Tuesday (July 12), and clarified by Damien English TD (Fine Gael), Minister of State for Business, Employment and Retail.

Minister English said a dedicated team had now been set up within the Passport Office to deal solely with first time applications from the North “with a view to significantly improving turnaround times for these more complex applications”. 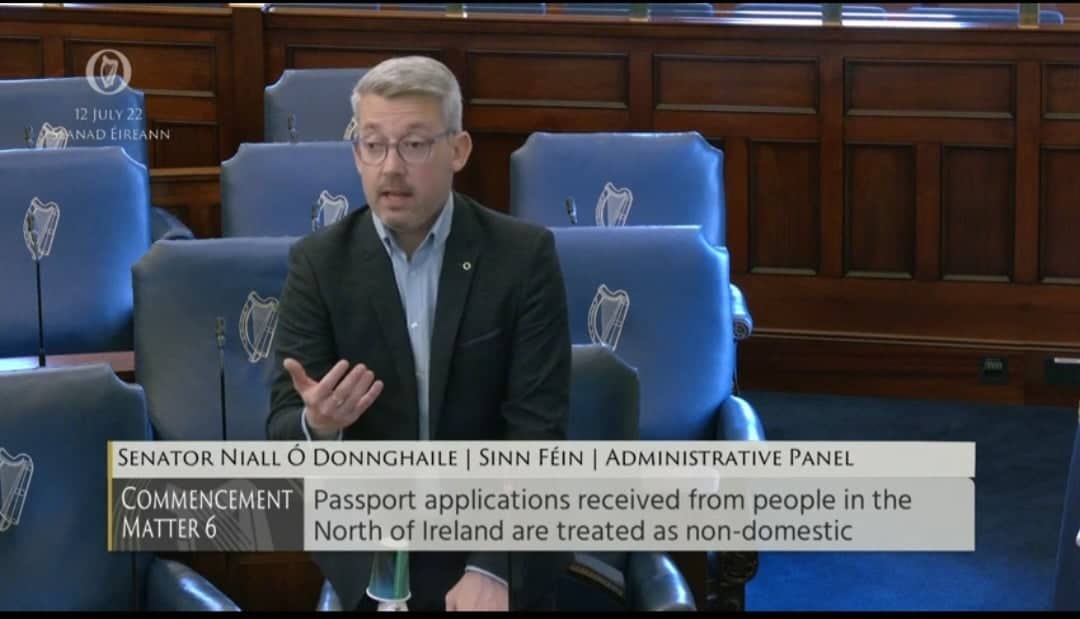 Senator Niall Ó Donnghaile raising the issue of Irish Citizens in the North being treated as non-domestic applicants for Irish passports.

The development was welcomed by Senator Ó Donnghaile who said there had been a “difficult and substantial backlog” of passport applications from people living in the North, which needed cleared.

Senator Ó Donnghaile had called on Minister for Foreign Affairs, Simon Coveney, to clarify whether Irish Citizens in the North applying for Irish passports were categorised as 'non domestic' applicants and whether this affected the timescale for processing their applications.

In response, Minister English said all online passport applications, including all applications throughout Ireland, North or South, were processed in the same way. 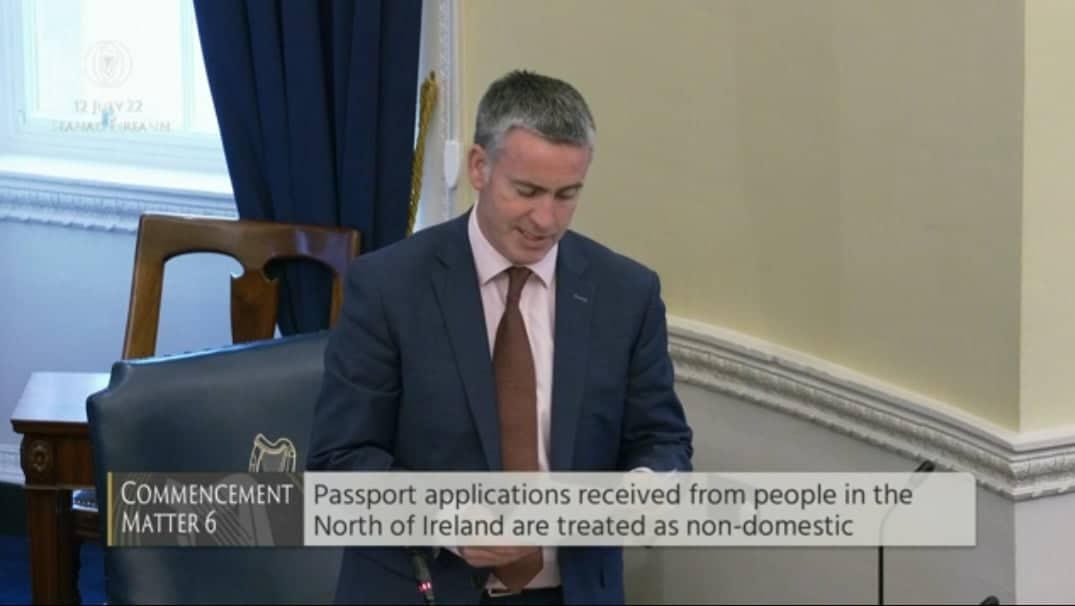 He added: “Renewal Applications, because citizenship has already been established, are processed, generally, within the same turnaround time of 10 working days for adult renewals and 15 working days for child or complex renewals, regardless of where the application is made.

“Therefore there is no difference in process time for renewal applications between those applicants from addresses in Northern Ireland or in the State.

“First time applications are more complex, regardless of where they are from, due to the increased complexity around the documentation required to confirm the person's identity and entitlement to citizenship.

“First time applicants resident in the State must have their identity and consent forms witnessed by a member of An Garda Síochána. A log of such applications is maintained by An Garda Síochána, which allows a streamlined verification process.

“First Time Passport Applications resident outside the State, including Northern Ireland, can avail of a broad range of witnesses for this purpose. The witnessing of these forms is a vital element of identity verification process for the Passport Service, as it provides initial assurance that the person in the photograph is the same person who submitted the passport application form. It is really, really important that we get that right,” said Minister English.

Minister English said first time applicants from outside the State, including Northern Ireland, could also be more complex due to the variety of documentation received from other jurisdictions.

He added: “Officers processing these applications must, therefore, be highly skilled and experienced. The Passport Service takes its responsibility to protect the integrity of the Irish Passport very seriously.

“The Irish Passport has a strong international reputation due to the strength of the security features within the passport book and the robust processes involved in its issue. The Irish Passport was recently ranked fifth in the Henley Global Passport Index as it provides our citizens with visa free access to 187 countries. Accordingly, a rigorous analysis process is in place to verify the identity and citizenship status of first time applicants. As a result, processing time for these applications can take a little bit longer.

“The Passport Service continues to see increasing demand for passports from citizens in Northern Ireland, so a dedicated team has been deployed to focus solely on First Time Applications from applicants resident in Northern Ireland, with a view to significantly improving turnaround times for these more complex applications.

“In the last four weeks, the Passport Service issued an average of almost 6,000 passports a day. A considerable improvement is being seen across the system,” said Minister English.

The Minster revealed the Department of Foreign Affairs has made significant investment in the Passport Service in the last year in order to enhance customer service.

“The Passport Service is confident that the increased resources that have been allocated will improve the service to all of the citizens, regardless of the place of residence, whether in Ireland or overseas,” concluded Minster English.

Welcoming the establishment of a dedicated team within the Passport Office, deployed solely to focus on first time applications from the North, Senator Ó Donnghaile there was a substantial backlog which needed cleared.

He added: “I put it to the Minister that the dedicated hub, the Oireachtas helpline, should be made available to our MLA and MP colleagues in the North, who deal equally with the same amount of applications as us.

“My understanding, having spoken to some of my MP colleagues last week is is that they still don't have access to the hub. It would just be a major help to them in their day-to-day constituency work. You know yourself how problematic it can be so a dedicated resource for them would be very welcome.

“[However, if] there is a different range of witnesses in the North compared to the An Garda Síochána in the South and it is causing a disparity, it is causing a delay, if someone puts in an application from Derry as versus Donegal, if there is this delay because of the nature of the witnesses, perhaps that is something we need to look at in terms of how we streamline and improve that service going forward.”

Minister English confirmed the area of passport application witnesses was currently being examined, to see if it could be improved and streamlined.

“The dedicated team to deal with applications from Northern Ireland should be of assistance and should help as well,” he said.